Home » Travel » Is it Worth Visiting Universal Orlando During a Pandemic?

Why Did Your Family Visit Universal Orlando During the Pandemic?

I am not a reopen everything person, and we have been strict about quarantining since March. But I also know that things do need to reopen, so people can get back to work.  I was curious about how everything would go during the reopening. I also figured that crowds would be lowest at the beginning, but that was a total guess. Plus I wanted to visit before the fall and winter when flu season would hit again.

Admittedly, I was a little nervous about the risk, but we also went in with the mindset that if things got too crowded or were a disaster, then we would bail and do something else.

I liked all the precautions Universal Orlando was taking like requiring face masks and temperature checks as well as social distancing markers throughout the parks.

Did You Drive or Fly?

We decided to drive from Virginia. I’m not ready to get on an airplane, but I apparently I was ready to visit a theme park. And I would do it again.

On our way down, we stopped at bigger gas stations like Sheetz and Love’s, because they tend to be clean and there are multiple stalls. For the most part they were ,and we wore our masks inside.

Did You Stay at a Universal Hotel?

We did! And you can read about all the reasons I recommend staying in a Universal Orlando Hotel, especially during this time.

The location was great, customer service was great, the extra hour makes for great pictures, and the hotel was clean! They are taking all these extra measures to keep things even more clean, and I appreciate them.

How were the Crowds at Universal Orlando?

However, they were also working out all the kinks with the virtual queue, mobile ordering, and social distancing at restaurants, so those weren’t the funnest days. It was frustrating.

I’m glad we went back, because Opening Day was the best! We rode Hagrid’s Motorbike Adventure twice, my youngest rode Pteranodon Flyers and Flight of the Hippogriff about 6 times each, and we easily did what we wanted.

However, that’s not to say that everything is a walk-on and you can just hop on and off all the attractions. Because of social distancing, some things take longer to load and unload, and not every ride is going out full. But on some of the less popular rides, we could usually get on in less than 5 minutes. 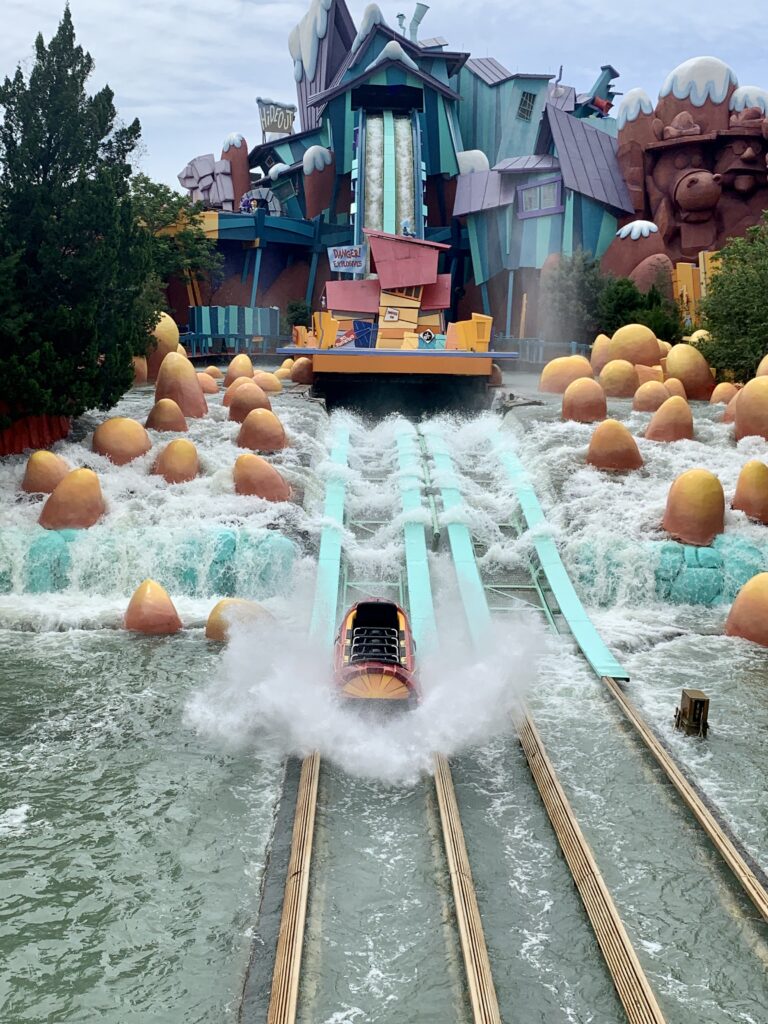 The first day they tried to socially distance guests on Hagrid’s and they quickly learned that was not going to work if you want guests to be able to ride. It was a smart decision, because that first day even with virtual queue took about 45-50 minutes to get through.

After the first couple of days, it took about 25-30 minutes depending on weather. We were able to ride Hagrid’s 7 times during our trip.

Areas like Hogsmeade are always going to be crowded except maybe the first hour of the day or the last or if rain chases many people away. It’s just very narrow and there’s not a lot of extra room. Also we noticed crowds were heaviest during the middle of the day.

What Safety Measures Does Universal Orlando Have?

Did my family feel safe at Universal Orlando? Overall, yes. I’m not a doctor or a scientist. I try to keep up on all the information out there, but sometimes it’s contradicting. However, the number one reason I was ok going was because masks and facial coverings are required for everyone. I really do think it’s a good barrier to help stop the spread.

Here are the safety measures I noticed at Universal Orlando:

Yes, everyone (except children under 3).  So naturally the next question is, did your kids mind wearing the masks in the parks? No. My family and I had no problem wearing them. Were they sometimes uncomfortable and hot? Yes. But my youngest is also 7 years old. A preschooler? I don’t know that they would be too content with it.

We also lucked out with overcast and some rainy days, so the temperatures were not blazing Florida hot. When it was sunny and hotter, then they became harder to wear.

If you don’t have a face covering, they do have Universal Studios themed masks for sale $6 or 3 for $15.

And you can take off your masks while drinking a Butterbeer down Diagon Alley.

Before coming into Universal CityWalk, all guests will have their temperature taken with a no-touch thermometer. If your temperature is higher than 100.4 degrees Fahrenheit, then you will not be permitted to enter.

Hand Sanitizer Stations At Most Rides

There are markers throughout all the line queues to socially distance guests. Many people remarked that some were more than 6 feet apart. Yes, that’s true, because some lines wrap around next to each other, so they try to avoid being directly next to someone when stopped.

For the most part it works if people pay attention. But some things are hard to avoid. You’ll never be able to avoid people in a theme park all the time. My family of 7 basically takes up 6 feet of space in line, so the markers did not help us socially distance the people next to us, only in front of and behind us.

I did notice spray bottles at every ride when we got off and people wiping down hand rails more frequently, but they are not cleaning cars after every ride.

There are several designated locations in both Universal Studios and Islands of Adventure where you can take off your masks called URest Areas. These are open air locations where you’re permitted to take off facial coverings and hang out without them on while still social distancing.

Social Distancing and No Touch Pay at Dining Locations

All the indoor dining location now have a host to seat guests. Tables throughout the restaurants are marked as unavailable and you’ll mobile order and pay through the Universal Orlando Resort app. Then someone will bring you your food/napkins/utensils, etc.

However in some areas with Coke Freestyle Machines, you are allowed to refill your drinks on your own.

If you were to purchase a refillable mug at a kiosk in the park, then your refill would be provided in a paper cup.

Is the Virtual Queue Easy to Use?

Other attractions like Harry Potter and the Escape from Gringotts and Harry Potter and the Forbidden Journey also required them, but that’s only when the lines get too long to properly social distance. So it’s possible for them to start as standby, then later you’ll need a Virtual Line Pass. And that can change throughout the day, so always keep an eye on the app.

To make a Virtual Line Reservation at Universal Orlando Resort:

Select Virtual Line on the left hand side of the Universal Orlando app once you open it.

Select the attraction you want and click Virtual Line- Reserve.

Then slide the number to select how many people are in your party, click on the time you want, and click Reserve Virtual Line Pass.

When it’s your return time, head to the attraction, have the QR code open on your app, and they’ll scan you and your party in!

You can only reserve two attractions at a time. Once you use one, you can make another reservation time.

At first, the app was a hot mess. You would get a message that no times are available or that there is a time and when you try to reserve it, it won’t let you. And sometimes that still happens, especially with Hagrid’s. However, they do release more times as the day goes on.

Once the app was working correctly, it was also easy to change your time for everything but Hagrid’s. If we were in one park and our virtual line time was coming up quick, I could go into the app and click change return time once I pulled up my selection, and it allows you to see other options if they’re available.

Universal Orlando Virtual Line tip: I recommend exiting completely out of the app when trying again for a time. You have to swipe out of it, not just close it. Also, I had luck being able to reserve times for Hagrid’s 15 minutes before park opening, so check then. My husband was also able to make reservations at the same time with his device.

Are there Character Meet and Greets?

In the traditional sense, no. You don’t get to hug a character or stand within 6 feet of them, but there still are characters around the park. And you can take a picture while they are on a platform.

While we were there, we didn’t see a ton, just because there was a lot of rain, but there are many still doing little street shows, too, like Trolls and Dora and Diego.

Is it Worth the Money?

I think it depends on your expectations. For my family, yes 100%. We had a wonderful time, rode all that we wanted, the crowds were low to manageable, and we had a whole lot of Butterbeer. Side note. Did you know there are 6 types of Butterbeer at Universal Orlando?

However, I’m also an avid theme park goer, so for the most part, I know what I’m doing.

If this is your first time visiting Universal Orlando, then maybe you want to wait until you get all the magic. Or if masks bother you, then wait until they’re not required.

I didn’t feel there was a ton of loss. I do like a good character photo, and yes, it’s weird to have pictures in masks. some of the queues are different, too. They’ve turned off some of the virtual parts of queues like inside Harry Potter and the Escape from Gringotts, and you no longer “ride in the elevator.”

Also I do wish they would get rid of the lockers at Universal, because that’s my biggest pet peeve – those dang tiny lockers. But I digress.

For me, it’s about experiences and memories, and we had plenty of those. And although I can’t ask someone to take my family pictures, I do at least have pictures of my daughters in an empty Diagon Alley or my husband and I in front of an empty Hogsmeade. 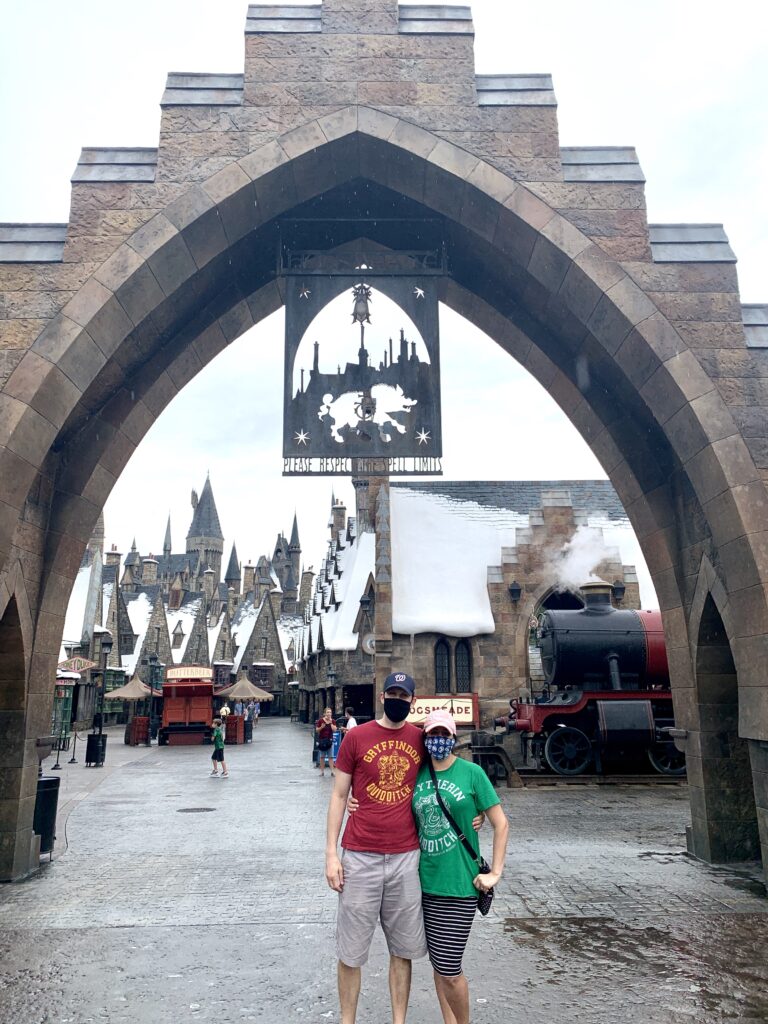 My favorite is that I finally got video of my kids going through the 9 3/4 platform from King’s Cross Station. Usually you’d have other people in your video and have to hurry and yell at your kids to go through when you say now, but now they hold the next party from going for social distancing. I’m not saying take your sweet time, but it’s a fun memory worth turning into a TikTok.

At the end of the day, there is always a risk, and if you’re not ready, you’re not ready. You don’t have to be. Universal Orlando will still be waiting for you when you are.

Why You Should Stay at a Universal Orlando Hotel Especially After Reopening
Categories: Theme Parks, Travel 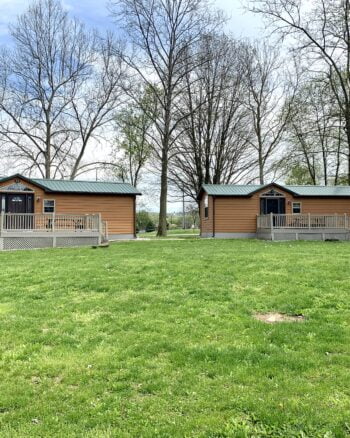