Season 2 of The Mandalorian is finally here! We were first introduced to Baby Yoda in Season 1, and naturally fell in love. This is a collection of the best quotes from The Mandalorian Season 2 from favorite characters Mando, Ahsoka Tano, Cara Dune, Peli Motto, Cobb Vanth, and more. Each week this post is updated as a new episode comes out every Friday! 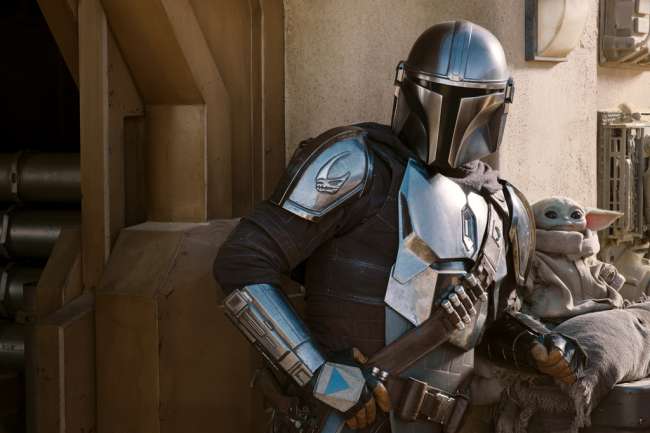 The new season finds the Mandalorian aka Din Djarin and the Child (Baby Yoda) continuing their journey, facing enemies and rallying allies, as they make their way through a dangerous galaxy in the tumultuous era after the collapse of the Galactic Empire.

If you don’t know anything about The Mandalorian, check out my Mandalorian Parents Guide to see just how violent the show can be. However, if you’re a Star Wars fan, it’s a fantastic series!

The trailers have teased us with some good quotes from The Mandalorian Season 2. And if you’re looking for Season 1 Quotes and quotes about Baby Yoda, check here.

Show me the one whose safety deemed such destruction. -Armorer

You must reunite it with its own kind. -Armorer

I’m here on business. I need your help. I’ve been quested to bring this one back to its kind. -The Mandalorian

The songs of eons past tell of battles between Mandalore the Great and an order of sorcerers called Jedi. -Armorer

You expect me to search the galaxy and deliver this creature to a race of enemy sorcerers? -The Mandalorian
This is the way. -Armorer

Episode 1 of Season 2 starts off with lots of action. Thank goodness, the funny quotes from Peli Motto break up some of the tension.

You know this is no place for a child. -Gor Koresh
Wherever I go, he goes. -The Mandalorian
So I’ve heard. -Gor Koresh.

I’ve been quested to bring him to his kind. If I can locate other Mandalorians, they can help guide me. -The Mandalorian

Do you gamble, Mando? -Gor Koresh
Not when it can be avoided. -The Mandalorian

I’m not leaving my fate up to chance. -The Mandalorian

The Mando I know of is on Tatooine. -The Mandalorian

Mando, cut me down. -Gor Koresh
That wasn’t part of the deal. -The Mandalorian

How much do you want for it? Just kidding. But not really. If this thing ever divides or buds, I will gladly pay for the offspring. -Peli Motto

I’m sure you call the shots where you come from, but ’round here, I’m the one tells folks what to do. -Cobb Vanth

Take it off. Or I will. -The Mandalorian

We gonna do this in front of the kid? -Cobb Vanth
He’s seen worse. -The Mandalorian

I guess every once in awhile, both suns shine on a womp rat’s tail. -Cobb Vanth

If we fight amongst ourselves, the monster will kill us all. -The Mandalorian

Episode 2 wasn’t quite as exciting as the first episode, but Peli Motto came through with the jokes again. And even Mando was feeling funny. Enjoy!

You finally found a Mandalorian and you killed him? -Peli Motto

However, there is one small skank in the scud pie. -Peli Motto

What can I say, I’m an excellent judge of character. -Peli Motto

Wake me up if someone shoots at us. Or that door get sucked off its rails. I’m kidding. If that happened, we’d all be dead. Sweet dreams. -The Mandalorian

Don’t play with your food. -The Mandalorian

There is only one way. The way of the Mandalore. -The Mandalorian

Help the child. -The Mandalorian

He didn’t kill your brother. I did. -Bo-Katan

What do you know of the Jedi? -Bo-Katan

Nothing. I was hoping you would help me by creed.

You’re changing the terms of the deal. -The Mandalorian

This is the way. Bo-Katan

This episode had more action and we see Greef Karga and Cara Dune again!

And you come here, little one. Have you been taking good care of him? -Greef Karga

Marshall Dune is to be thanked for cleaning up this town. -Greef Karga

I’m afraid of heights. And heat. And lava. -Mythrol

The Ahsoka episode! And this is also the episode we find out Baby Yoda’s real name, though I don’t know that I’ll ever stop calling him Baby Yoda. Here are some of Ahsoka’s quotes in The Mandalorian Season 2.

Surrrender or face the consequences. You have one day to decide. -Ahsoka

I’ve never had dealings with a Jedi before. -Mandalorian

Grogu and I can feel each other’s thoughts. -Ahsoka
Grogu? -Mandalorian
Yes, that’s his name. -Ahsoka

The Force is what gives him his powers. -Ahsoka

The Jedi Order fell a long time ago. -Ahsoka
So did the Empire, yet it still hunts him. -Mandalorian

I sense much fear in you. -Ahsoka

He’s hidden his abilities over the years to survive. -Ahsoka

I want to see if he’ll listen to you. -Ahsoka
That’d be a first. -Mando

So you threw in with the Jedi? -Lang
Looks that way. -Mandalorian

Probably one of the saddest episodes of The Mandalorian yet! But we do get ourselves some Boba Fett, so it’s a tradeoff.

Looks like that’s the magic rock I’m supposed to take you to. -Mando

Does this look Jedi to you? -Mando

You know for a second there, I thought you were this other guy. -Mayfeld

Let’s get one thing straight. You and I are nothing alike. -Mandalorian

You see boys, everybody thinks they want freedom, but what they really want is order. And when they realize that, they’re gonna welcome us back with open arms. -Valin Hess

Did I miss any of your favorite Season 2 quotes from The Mandalorian? Drop them in the comments below.

If you need a little Season One recap of The Mandalorian, watch the video below.  And check out these Mandalorian memes.

Best Mandalorian Memes to Get You Hyped - Lola Lambchops

[…] I go, he goes is one of my favorite Season 2 The Mandalorian quotes. The bond Mando and The Child share is adorable and @Chantal.art nailed […]

[…] Here are more quotes about Baby Yoda in the Season 2 Mandalorian Quotes. […]