How to Make the Best RunDisney Race Signs

My love for cheering for races started with the Kanye sign at the Princess 10K during Disney’s Princess Half Marathon. Some friends and I decided to cheer for Disney’s Enchanted 10K, and it was so much fun, and the beginning to many race signs.

Runners would laugh, they would stop for a quick pic, and I loved shouting encouraging things. The Kanye sign was Instafamous for about 5 minutes, but the best was hearing stories of how it actually inspired runners. I was inspired by their stories, and watching people overcome obstacles, fatigue, and fear during a race is extremely motivating. So cheering soon became a regular thing.

We’ve even started adding Celebrity Corner where we bring giant heads of celebrities and have posters of them saying things. Not even the Hillary Clinton, Donald Trump, or even Puppy Monkey Baby brought controversy.

Ok, well maybe Donald and Hillary did bring a little controversy. But the big one? 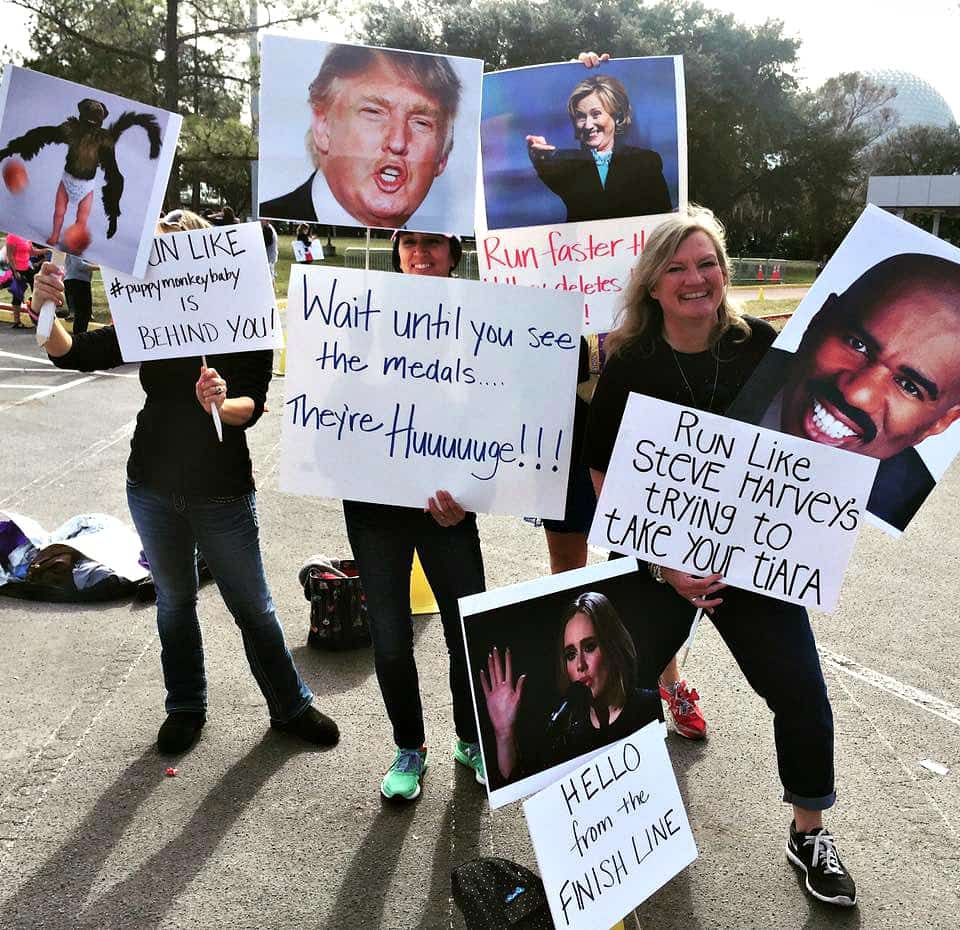 It was Darth Vader.

I know Darth Vader is a Sith and all, but I was surprised by the controversy. It was late and we needed to get to bed to get up early to cheer for the Walt Disney World Half Marathon runners in the morning. I still had not come up with a sign idea.

I was feeling some pressure from last year’s Kanye sign. So I searched the internet, saw the Darth Vader sign, laughed, and my friend Shannon whipped up a quick Vader. I loved it! Probably because Darth Vader is my favorite Star Wars character.

So in the morning I started to worry a bit. Is saying I find people’s lack of training disturbing rude? My friends assured me it wasn’t, and so we went to find a cheering spot around mile 12. At first I just kind of let my sign hang down low. I was trying to feel out the crowd. The elites don’t usually pay attention to our signs. They may glance, but give us an ‘oh, well aren’t you cute?’ nod and carry on with the race. Then the middle-of-the-pack runners starting coming. Our people!

Well I was getting positive feedback on the sign. People would laugh. Nod their heads in agreement. Stop for pictures. Yell to their friends about their training. I was feeling good and started to cheer louder now.

All of our friends had passed, but we decided to stay until the last runner came by. I wasn’t really thinking about my sign. I was caught up in the moment of cheering, yelling, clapping, handing out candy, and encouraging every runner and walker, because your mental game comes into play at the end.

The last 5 runners were coming around, because we had seen the Balloon Ladies pass, and we saw the runDisney motorcade coming up. One girl was by herself, saw my sign, kept moving, and then changed her mind. She took out her earbuds, backed it up, and said, “You know what? That sign sucks!”

Her: That’s not nice. I did try to train for this race, but I’m injured.

Me: Sorry, the sign was just for the Star Wars fans.

Her: Well I’m a StarWars fan, and it sucks. <starts crying> <gave me the finger. not that finger, but an index finger as she pointed at me and walked off>

What to Do When Your Race Sign Isn’t Funny

My friends and I just stood there dumbfounded. Then I just had to laugh and shrug it off. I knew where she was coming from, because I had been there. Tinker Bell Half 2014 was horrible. I knew the frustration. I knew that anything could have set me off, because it’s not the race I had dreamed of running.

The very next day while I was running the Walt Disney World Marathon, I told my friend and running partner that I had had enough of her motivational anythings. Different people just need different things.

My sign could have very well sucked, but I don’t think it was that that caused this particular confrontation.

For the future I’ll just stick to the nice signs my daughters make for me at the airport. Or else I’ll bring my kids with me to cheer. Who can yell at these faces? But funny race signs really are my jam.

Here are some tips for a great runDisney race sign.

Think of a current event, show, movie, quote, character to inspire or make someone laugh. We had taken advantage of the Kanye/Taylor situation, The Mandalorian popularity, Ryan Gosling “Hey Girl” Signs, even political signs (which now I would probably stay away from), or we print off big celebrity faces. We used Hamilton, Mariah Carey’s NYE debacle, or your runner’s favorite Marvel character. You get the picture!

If you want to make an easy sign with a picture, we would print off 16 x 20 pictures at Costco or Walgreens (google for a coupon code), and glue them to a thicker board to make them easier to hold. Sometimes we’d even use a paint stick and tape it on the back to use as a handle. You can even print off a picture of your runner to see as they run by!

If you want to add words on the picture, then use a meme generator online to make it into a meme and then print it off. Voila! Easy runDisney race sign!

Cheering really is so much fun and it has changed since the post-Covid closures, so make sure to read these tips to cheer for the Walt Disney World Marathon Weekend.

If you already think I’m a jerk, then take a look at my Princess Half Marathon Tips and Etiquette guide, because princesses, we need to keep it royal.

← Previous
The Best Book of Boba Fett Quotes on Disney+

Next →
Spectator Tips for Cheering at RunDisney Races in 2022
Click here to cancel reply.

I LOVE your Darth Vader sign! But thanks for the heads-up. I won't copy it if grouchy people react badly to it.

Most people found it humorous, but some were not in the mood for it.

I know this is an old post, but I think that Vader sign is hilarious. Emotions are wonky at the end of a race, so I can get where she's coming from, too.

My favorite poster from this year's Light Side Challenge? Face it: you've done dumber things while drunk. That one kept me laughing for quite a while.

That one is funny, too!! Thanks! I know how it feels to just have a horrible race and not be in the best mood. The funny signs are usually my favorite on a race course.

[…] Princess Enchanted 10K from earlier this year. I’m waffling between running only the 10K and cheering the half marathon or registering for the Glass Slipper Challenge. I really love the 1oKs, and even […]

I love seeing the great signs out at a race... really gives me a lift. I didn't "get" your sign, but I could hear it being said in a Darth Vader voice :-)

Thank you! I really appreciate the spectators and volunteers at races, too!

I think your sign was funny and I look forward to reading signs at every race. I can't wait to see what your friends make for Wine & Dine! That will be my first half, and I am sure I will need to motivational signs toward the end.

Thanks! I hope you'll love the signs and have fun! Wine & Dine is a blast and runDisney is perfect for a first half marathon!