Spectator Tips for Cheering at RunDisney Races in 2022

Being a runner and a chEARleader for runDisney races, I have experienced the best of both worlds. Since the 2017 Walt Disney World Half Marathon got cancelled (the race I was supposed to run), I was only a spectator this go around, but I always have the best time doing it! If you’re going to support your favorite runner at their next race, I’ve got come some tips for cheering for runDisney races in 2022 since it looks a little different than in previous years. 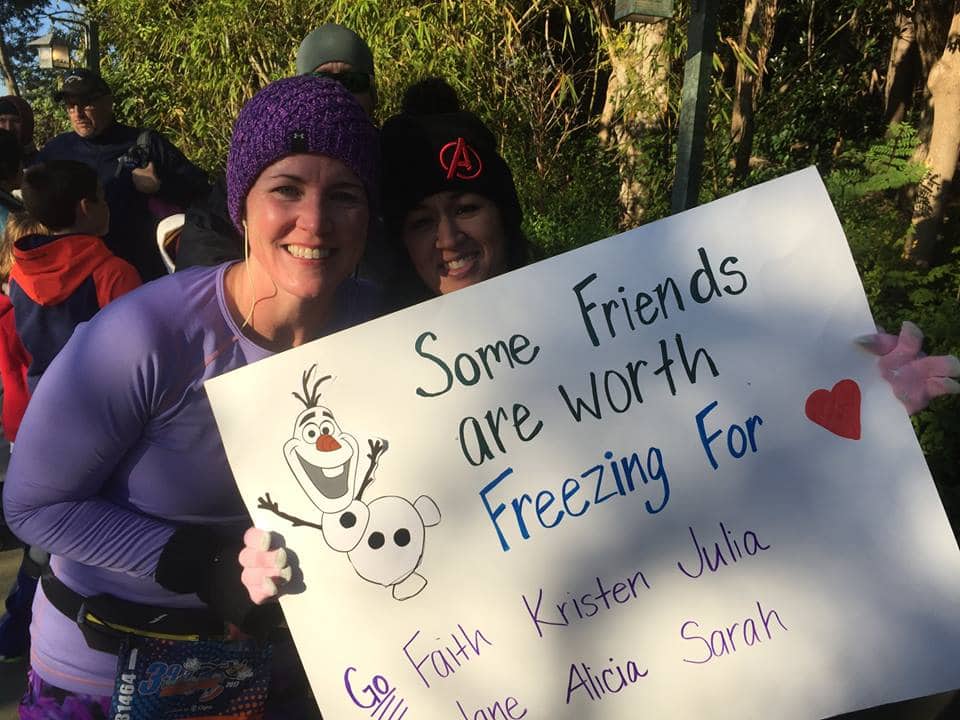 Cheering for runDisney races really is the best! I had so much fun at Walt Disney World Marathon Weekend, I decided to cheer year after year. My cousins from Brazil are running the 10K, friends are running Dopey, and others are running their last marathons. I can’t miss those magical moments. So before you cheer on your favorite runDisney runner, check out these tips!

Sign up for runner tracking here for the 2022 Walt Disney World Marathon weekend. It will be available January 3rd, 2022. Family and friends will be able to track participants with live online runner tracking for the 10K, Half Marathon and Marathon Distances.

Choose Your Spectating Spot With Your Runner

Let your runner know where you’ll be! Then they can look out for you. As a runner, when I’m having a hard time on the course, and I’m hitting a wall, knowing I’ll see a friend somewhere helps me push through.

However, now you can’t just meander your way to whatever spot on the course you want, like the Animal Kingdom parking lot.

Below are the 2022 Walt Disney World Marathon Weekend Spectating Spots.

Check your race guides or with the concierge at your Disney hotel if you’re relying on Disney Transportation. They told us buses wouldn’t run until 8:00 a.m., so we decided to drive to Animal Kingdom in the morning. However when we left at 7:15 a.m., we saw Disney buses running to the theme parks.

Leave adequate time to get where you are going. Road closures during race times slow things down.

One of my favorite things about spectating is making runDisney race signs! Since Steve Harvey first made an appearance at a race, we’ve adopted Celebrity Corner and now blow up pictures of celebrities with different sayings. My friend, Diane, always likes to invoke pop culture to make people laugh! Mariah Carey was a hit. I had to go with motivational and Captain America. There was a shout out to Hamilton fans, and of course, Kevin Bacon. Though some runners wanted real bacon.

No More Food or Snacks at runDisney Races as Spectators

Speaking of bacon…can you hand out snacks and drinks at runDisney races to runners? No. Rules have changed, and spectators can no longer bring food and snacks to give to their runners. It’s a bummer, because we used to bring waters, sodas, and candy for the marathon. My friend, Bonnie, even saved me half an Earl of Sandwich when I ran the WDW Marathon!

However, for safety reasons, they’ve done away with spectators handing out snacks at runDisney races, but there are still water stations along the course.

Have Fun and Have a Meeting Point at the Finish

Cheering for runDisney races is such a great experience. I know how much it means to have that support on the course. The people you know, the people you don’t know, the strangers, the sense of community as a whole. I love it! Have a great time and don’t forget to set up a place to meet your runner in the finish line area if that’s where you’ll be meeting again. We usually choose a letter of bag check and meet there.

Good luck, runners and spectators. Have a magical race!

← Previous
How to Make the Best RunDisney Race Signs

[…] running’s not your thing, no worries, cheering for runDisney races is a blast, too! Those who aren’t running support the others who are. We make signs, hand out […]

[…] and I stopped at a Walmart on Apopka Vineland Road to buy some supplies to make race signs to cheer runDisney races and the Walt Disney World Marathon Runners. When we were headed back we saw a legit-looking sign […]

[…] etiquette reminders. If you’re going to cheer on your favorite runner, then I’ve got runDisney cheering tips for you, too! Need costume ideas, then yup, check out my guide to group runDisney […]

LOL, those Mariah signs are HILARIOUS!! And I remember seeing the Steve Harvey signs at Animal Kingdom at last year's marathon. They were fantastic! Thanks for the tips since I *might* be cheering for the PHM next month due to injury. Will be a bummer but if I"m going to cheer, I want to be awesome at it! ;)

Oh no! Injury is a bummer, but cheering is a great time! I actually started cheering, because I was injured for a race as well. I hope your injury heals!

Fun! I don't think I've ever just cheered at a race. I've volunteered before, which obviously includes cheering. Sounds like you had as much fun as the people racing!