Posted on Published: May 1, 2021 Categories Entertainment

Funniest May the 4th Memes for Star Wars Day

Celebrate May the Fourth with these funny May the 4th memes on Star Wars Day! Why do Star Wars Fans celebrate on May the 4th?  Well, May the Fourth be with you is a play on words for Obi-Wan Kenobi’s famous Star Wars saying, “May the Force Be With You.” If you’re Catholic, you may just throw in an extra “And also with you,” for fun. Here are some of the best May the Fourth memes for 2021!

Where did May the Fourth come from? The phrase tied to this unofficial Star Wars Day was first used May 4, 1979, when Margaret Thatcher took office as Prime Minister of the U.K.  A full-page advertisement in the London Evening News appeared congratulating the new Prime Minister, which read: “May the Fourth Be with You, Maggie.” Members of Thatcher’s Conservative party published this, who were surely Star Wars fans.

Since then many Star Wars fans celebrate in different ways by reading funny May the Fourth memes, by having Star Wars movie marathons, or even by making Star Wars snacks, like these adorable Chewbacca cookies.

You can watch all of the Skywalker Saga on May the 4th on Disney+, plus Bad Batch premieres May 4th, 2021!

Enjoy some of the best May the Fourth memes on the internet to celebrate Star Wars Day 2021!

Sometimes short, sweet, and to the point is best.

Is that really so wrong? Yup, total disturbance in the Force on the 4th. 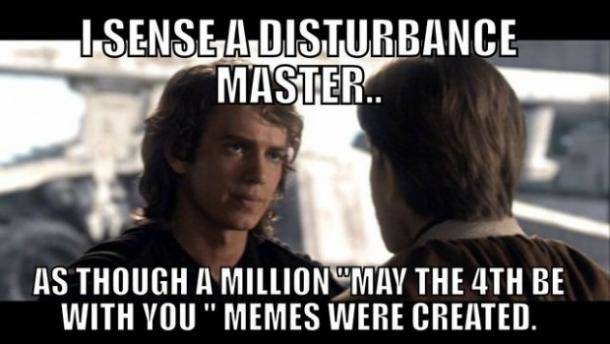 It’s Gonna Be May the 4th

Perhaps the greatest mashup of two meme holidays –It’s gonna be May memes combined with May the 4th. Who did this, because they’re a genius! Justin Timberlake has gotta be a Star War fan, right?

May the Fourth Be With You And Also With You

If Ewan McGregor was a Priest…

Dwight Schrute May the 4th Meme

You can always count on Dwight Schrute to set you straight.

Guess what day it is? Get excited, folks! Pew pew.

I love it when fandoms cross over! And Anna is totally me. You can show your young Padawans this meme if they’re just not that into it. This is my go-to meme for everything.

Whatever You Do, Don’t Forget May the Fourth Be With You

Don’t have any regrets, Luke.

Revenge of the 5th

May the 4th and Revenge of the 5th? I’m totally buying it!

And if you’re looking for just a funny Star Wars meme to share, look no further. Who doesn’t love a good, “Luke I am your father” joke. Sorry, spoiler alert!

When the Stormtroopers are Salty

Not everyone gets the day off for Star Wars Day…

Some people just won’t get it, but that’s ok, because Star Wars Day is for us fans!

May the Fourth Memes are Hilarious

I mean, I think they’re funny.

I hope these Star Wars memes make you smile! May the Fourth Be With You!

← Previous
Best The Mitchells Vs. The Machines Quotes on Netflix

Next →
Star Wars: The Bad Batch is Life After The Clone Wars
Click here to cancel reply.

Pop Culture: May the Fourth Be With You | The Viral Sphere

Bye Bye Bye, April, It's Gonna Be May Memes Are Back

[…] Yes, I appreciate a good fandom crossover. Because right after it’s gonna be May, it’s time for May the 4th memes! […]