What do you do when you have a Marvel-loving family? Assemble in Avengers Family Costumes of course! Every year we dress in a family theme for Halloween. A few years ago it was the Avengers, and now with the popularity of Avengers everything, it will be a hot theme. Some were DIY, some were store bought. Here’s how you can put together a quick Avengers group costume.

I was so happy when my daughters wanted to be Super Heroes, and they didn’t care whether they were girl characters or not. It would be nice to have more Avengers girl costumes, though. Ahem, Marvel. I know they’re working on it. This year my girls were eyeing a Wasp costume.

This was a pretty easy theme for me, since I’m already a huge Captain America and Avengers fangirl. What? I have to google Captain America pics? Dang it. I mean, all in the name of research.

That’s me. Since my daughter already called being Captain America, I had to be Cap’s bestie. I had a pair of black camo-like running pants, wore a long-sleeved black running shirt (I didn’t have the biceps for short-sleeved), and my black boots. I bought a wing accessory kit, and it even came with glasses. Easy and done. It’s currently unavailable, but I’m hoping with the new Disney+ show, The Falcon and the Winter Soldier, that they’ll bring something new.

I also wore a DIY Falcon Costume for running the Avengers 10K in Disneyland and for Mickey’s Not-So-Scary Halloween Party.

For our Avengers family costumes, my husband was Hulk. He wore a Hulk compression shirt I already had from running the Avengers Half Marathon. We also bought some Hulk fists, naturally. I found a cheap pair of purple sweatpants from Walmart, and we cut them up to look shredded. I didn’t have much luck finding purple shorts last-minute, so you improvise. 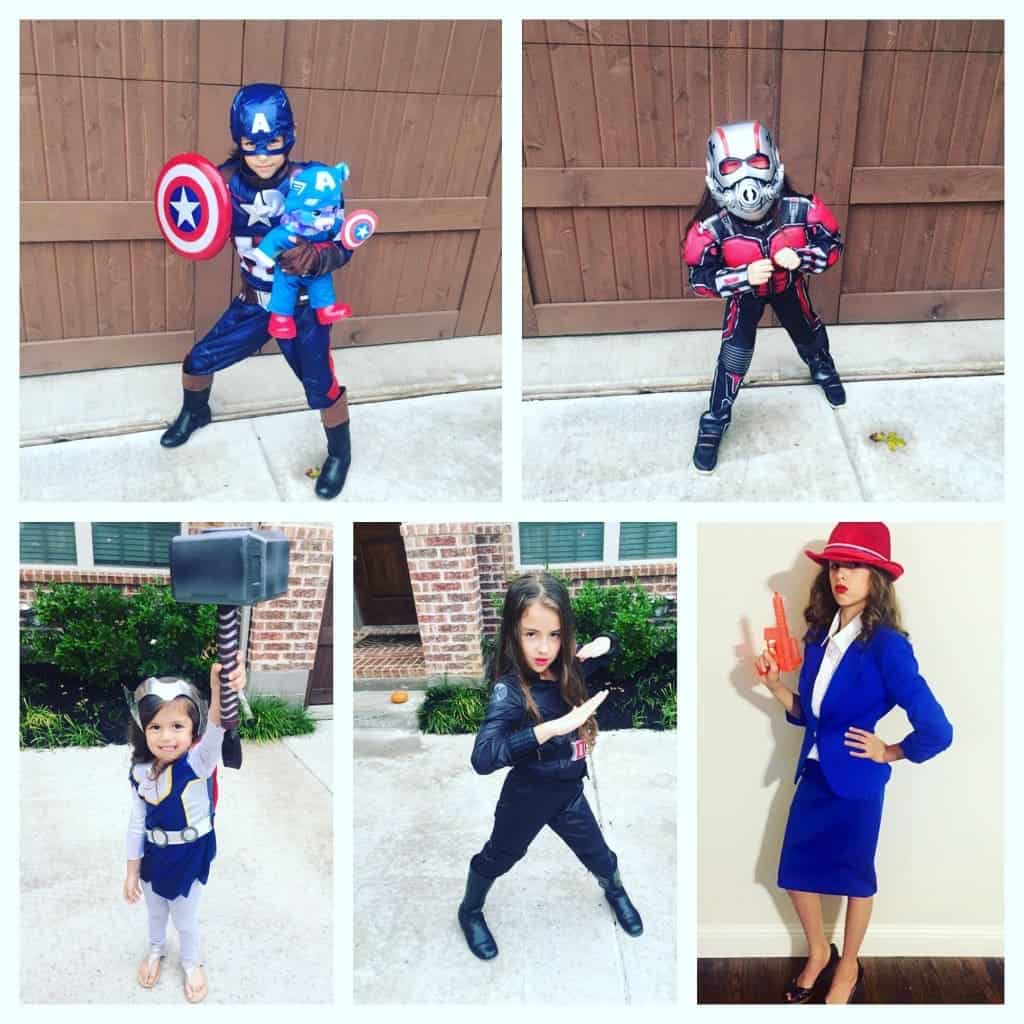 We’ll start with baby girl, because I loved this costume so much. The dress was a little short, so we added gray leggings under her dress, and bought her a Thor hammer. She already had silver sandals. She even wore it to Disneyland, because she wouldn’t take it off. You could easily make your own by adding a gray long-sleeved shirt underneath a blue dress and glueing silver fabric on top.

My daughter chose Captain America right away. She’s *almost* as big of a fan as I am 😉 That was a straight up Disney Store costume buy. We added a Captain America shield and black boots we already had. My daughter still wears that costume around the house.

This is one of the few Avengers girl costumes that existed when we did our costumes. Now there are so many awesome female Avengers and Marvel heroes you can choose from! This is the closest to the Black Widow costume my daughter wore. She already had black boots.

Black Widow would be so easy to DIY. Grab black leggings and a black shirt, make this DIY Black Widow belt, and add a S.H.I.E.L.D. patch.

Here’s another daughter that wanted an Avengers girl costume. This one was the hardest to put together, because of the color of blue Agent Carter wears. We finally found a skirt and jacket at Macy’s in the Juniors department. I searched high and low at thrift shops and came up empty handed.

Luckily, I also found an inexpensive red fedora hat at Party City and added white and blue ribbon around the hat. Toy guns are expensive, so I picked up a water gun from the dollar store. My daughter borrowed a white collared shirt from me and some heels. We added red lipstick, and bam! A sassy Agent Carter.

This one was a Target buy. And thank you, Target, because my daughter was obsessed with Ant-Man, and I couldn’t find it anywhere else. Since Ant-Man and the Wasp was released this year, I’m hoping they are more plentiful. Ant-Man rounds out our Avengers family costumes.

Our Avengers family costumes are in my top 2 favorite family Halloween costume themes.  I just love how much my daughters’ personalities come through. Girls are super heroes!

We might have to do a round 2, because so many new kick-butt female Avengers and Marvel charcter have come out like Shuri and the Dora Milaje from Black Panther, Scarlet Witch, Wasp, Valkyrie from Thor: Ragnarok, Gamora, Nebula, and more! I even love the female villains like Hela.

If you’re not familiar with these characters, then make sure to watch these Marvel movies in order to learn about all the Marvel characters you can dress up like for Halloween.

For more Family Halloween Costume ideas, check out our Alice in Wonderland Family Costumes  and our 101 Dalmatian Costumes. You can also check out Easy Halloween Costumes for Moms and Kids  in my Bus Stop Costumes where I dress up every day in October in a different costume to pick up my children from the bus stop!

[…] find plenty of inspiration to form your team of heroes for Halloween! We especially loved LolaLambchop, Leap of Faith Crafting, and A Little Tipsy’s […]

[…] Have fun with your dalmatian plantation! If you need more costume ideas, check out our Alice in Wonderland Family Costume and our Avengers Family Costume! […]

[…] Have fun with your dalmatian plantations! If you need more costume ideas, check out our Alice in Wonderland and our Avengers costumes! […]