Wilderness Explorers from the movie UP

Tips for Mickey’s Not So Scary Halloween Party

I usually recommend skipping a park in the morning and getting some rest or taking it easy, because I like to stay until they kick me out at midnight! If I’m paying extra for my ticket, you better believe I’m making the most of every minute.

When we entered the park around 4-ish, they gave us our party wristbands as soon as we entered the gate. Grab a Mickey’s Not So Scary Halloween Party map as you pass through. They also funneled party guests to the right of Main Street and handed us our trick-or-treat bags and a sweet treat!

Here are some of the things you can’t miss from the 2019 Mickey’s Not So Scary Halloween Party!

With the absence of a nighttime parade at Magic Kingdom right now, the value of Mickey’s Boo-to-You Parade is worth even more! It also happens to be my favorite parade of all-time.

There are 2 parades each night of the party, and although the 2nd parade is usually less crowded, you still need to arrive early to stake out a good viewing spot. Popularity has grown for this spooktacular parade, and you don’t want to miss the Headless Horseman ride through!

What makes this parade so special for me is the music, the variety of characters, the dancing ghosts from the Haunted Mansion, and the Gravediggers. I hold a special place in my heart for Disney Villains, so I love how they’re featured, but there’s still nothing nightmare inducing. This is one of the main reasons I attend Mickey’s Not-So-Scary Halloween Party.

They even added some new Incredibles floats for 2019!

Disney’s Not So Spooky Spectacular Fireworks

Does Disney World produce kick-butt firework shows every single day? Yes! I was a little sad about Happy Hallowishes leaving, but now there’s a new fireworks show during the Halloween party at Walt Disney World for 2019!

This fireworks show has projection effects, lasers, lights and fireworks and is hosted by Jack Skellington from The Nightmare Before Christmas. Disney’s Not So Spooky Spectacular  also features Mickey, Minnie, Donald and Goofy on a trick-or-treating adventure, as they are drawn to a mysterious haunted house.

I finally watched Disney’s Not So Spooky Spectacular Fireworks, and it’s definitely a cute show. It even felt like it was geared towards younger children. However, I miss Happy Hallowishes. The music was better and you could watch the fireworks from so many places in Magic Kingdom Park.

Since Disney’s Not So Spooky Fireworks uses a lot of projections on Cinderella Castle (which are very cool), you need to be in the hub to watch them, and it can get crowded and hot in there.

Special Halloween Treats at Mickey’s Not So Scary Halloween Party

Trick-or-Treating is fun, don’t get me wrong. I’m the one leaving the party with a full bag of candy and eating everyone else’s candy, too. However, the special party treats are where it’s at.

In the past they have had had a Pumpkin Cheesecake Dome, a Jack Skellington Dessert, Haunted Mansion Desserts, Pumpkin Mickey Waffles, Candy Corn Ice Cream, and more! These were only offered during party nights, so that’s another thing that makes Mickey’s Not So Scary Halloween party special. 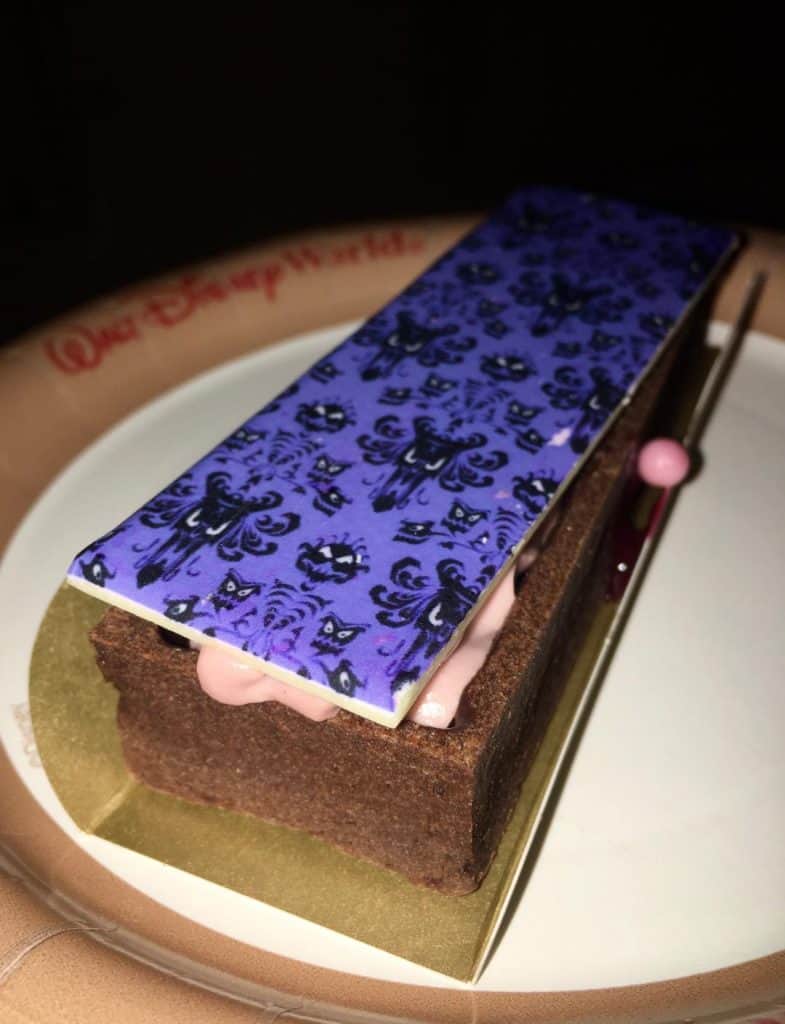 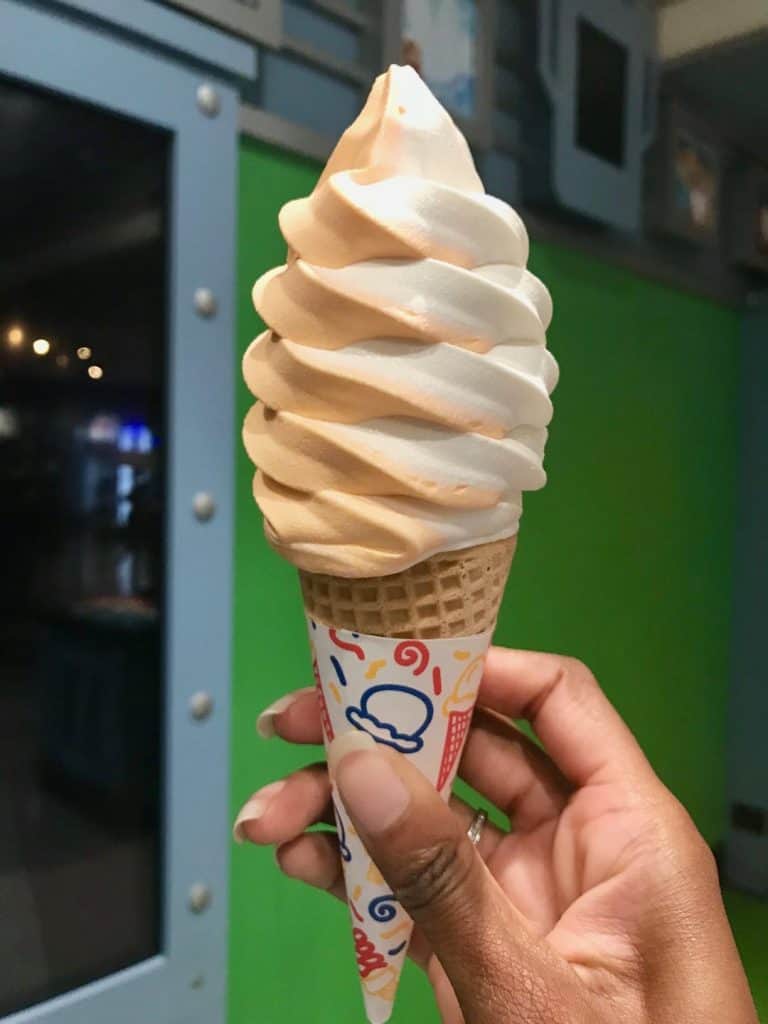 In 2019, Mickey’s Not So Scary Halloween Party offers some adorable and tasty treats that you won’t want to miss. Check out these Jack and Sally Push-Pops! Jack is  a chocolate cake, and Sally is a gluten-free vanilla cake with strawberries. My friend, Tessa, from Mama’s Geeky, says Sally is the way to go!

She also recommends Constance’s For Better or For Worse Wedding Cake. It’s a citrus-scented cake with raspberry Bavarian cream. Hurrrry baaaack for a second one if you like.

They also offer a Hocus Pocus cupcake in the Main Street Bakery that is really cute!

The Sanderson Sisters from Disney’s film Hocus Pocus are having a Halloween party and invite all your favorite Disney villains. They have been performing this for a few years now at Mickey’s Not-So-Scary Halloween party, and I never added it to my to-do list.

2017 is the first year I watched it, and it blew me away. There’s so much talent on that stage in front of Cinderella Castle, and of course, the Villains appear, so I was giddy! I actually like this stage show better than the movie. I’m so glad it’s still here for 2019!

Did I mention the villains? I love seeing so many on stage at once, and their musical number is insane!

Yes, I’m an adult, and yes, I love taking pictures with Disney characters. Even better is when my kids are with me, because the looks on their faces are priceless!

During Mickey’s Not-So-Scary Halloween Party, you can get photo ops that you can’t get anywhere else – like a Moana meet and greet. Also, you can find all Seven Dwarfs, Jack Skellington and Sally, and many Disney characters dressed in Halloween costumes.

Some popular characters such as Jack and Sally have been appearing as early as 5 p.m., but you do need a party wristband to get in line to see them. I suggest arriving early, because their lines get extremely long. I have heard reports that Jack and Sally have started accepting guests at 4:30 p.m., so guests have been getting in line very early. they meet in Town Hall.

For more information on the character meet and greets, check out Tessa’s post!

New for Mickey’s Not So Scary Halloween Party 2019 is the DescenDANCE party! With the popularity of Descendants 3, this is a hit with all the kids, tweens, and teens who are Descendants fans! I know all the words to Queen of Mean, so it’s for the adults, too!

The DescenDANCE party takes place inside Cosmic Ray’s Starlight Café, and features a DJ for dancing, photo ops, and video shout-outs from some of the stars of Descendants 3. This is exclusively for Mickey’s Not-So-Scary Halloween Party attendees on party nights.

They show video messages from some of the stars of Descendants and dance to some of their videos! I went in and kids were screaming and dancing and having a good time!

Here are some DIY family Descendants costume ideas if you need them!

Is Mickey’s Not So Scary Halloween Party Worth the Price?

This question is subjective. I think it depends what you want out of the party. Any Disney party is a good time! I admit I balked at this year’s party price. $100 is steep in my book. However, with all the things to do at Mickey’s-Not-So-Scary Halloween party, I can justify the price, especially for myself.

I’m a Halloween person and so is my family. My kids LOVE Mickey’s Not So Scary Halloween Party, so I set aside the money for the party and then save in other areas. Maybe we’ll skip a character meal or stay in a Value resort for a few nights.

Some people come to the party to ride attractions when lines aren’t as long. I enjoy the Halloween extras, so I prefer to spend my time doing those things. Also, my children can stay up late, so we stay until the end. If your children are falling asleep at 8 p.m., then enjoy morning Extra Magic Hours instead.

I didn’t even mention the special Disney PhotoPass ops with the Hitchhiking Ghosts and the Headless Horseman, and admiring the creative and amazing costumes worn by other guests. If you’re going to buy a ticket, then be sure to do the best things at Mickey’s Not So Scary Halloween Party and make the most of it!

If you need other easy costume ideas, check out my Easy Halloween Costumes. There are tons of things to do at Mickey’s Not So Scary Halloween Party and the party is well worth the price tag for my family. Dress up and enjoy the bootiful ambiance!

Next →
Best Place for Dole Whips in Disneyland
Click here to cancel reply.

[…] friends surprised me with a ticket to Cruella’s Halloween Hide-A-Way during Mickey’s Not So Scary Halloween Party! I know, best friends ever, right? What could be better than Cruella de Vil, food, desserts, and a […]

Is Villains After Hours Worth the Cost? - Lola Lambchops

[…] things, foods, rides, activities, shows, etc. are important to different people. For comparison, Mickey’s Not-So-Scary Halloween Party is my favorite party ever at Walt Disney World, and I can justify the price. Others aren’t as […]

Where to Meet Moana at Disney World | Lola Lambchops

[…] idea came from a couple I saw at Mickey’s Not-So-Scary Halloween Party in Walt Disney World earlier. I already had the Evil Queen costume from a Target clearance the year […]