Wondering if The Adam Project on Netflix is ok for kids? The Adam Project starring Ryan Reynolds, Jennifer Garner, and Mark Ruffalo is rated PG-13 and is an enjoyable sci-fi action adventure that’s fairly family-friendly with some asterisks. Here’s what parents need to know in The Adam Project Parents Guide. 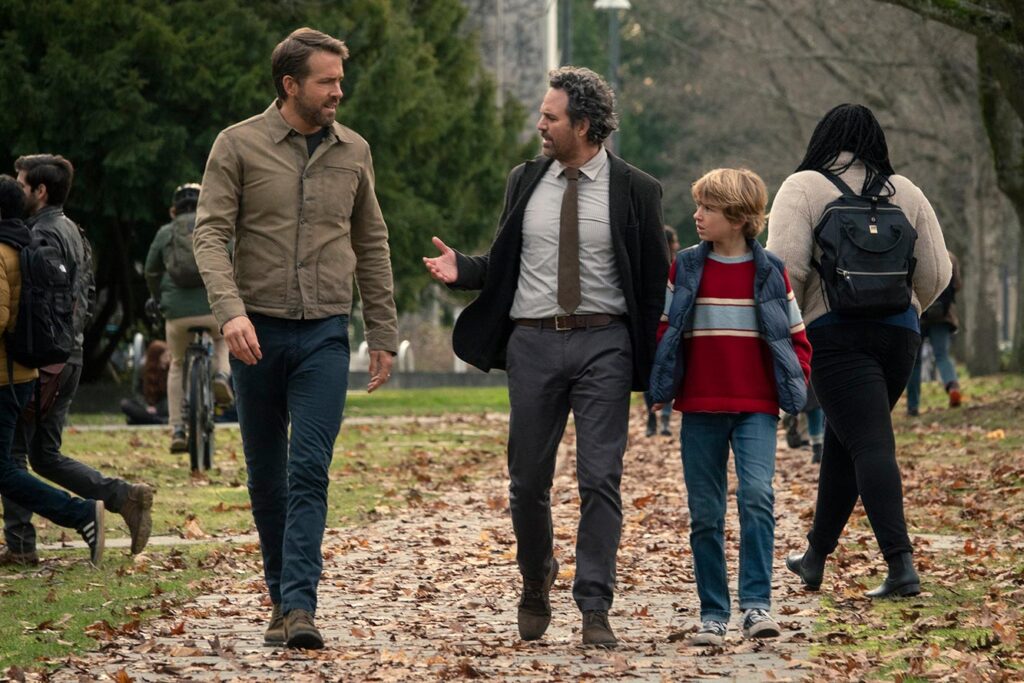 An adult pilot, Adam Reed (Ryan Reynolds) time travels to his younger self (Walker Scobell) in order to save the future. Only he accidentally lands in 2022, not the year he was intending. Next, hijinks and trading insults ensue with his 12-year-old self as they try to hide middle-aged Adam from their mother (Jennifer Garner) and have to time travel again to get help from their deceased father (Mark Ruffalo).

Why is The Adam Project Rated PG-13?

The Adam Project is rated PG-13 for violence/action, language, and suggestive references which means some content may not be suitable for kids under 13.

There are some suggestive references when older Adam talks to younger Adam and they talk about getting laid. There is also a penis joke, a joke about a condom, and passionate kissing with implied sexual relations, but no nudity or skin is shown.

Younger Adam is bullied and gets in a fight where they call each other names and throw punches.

Violence is pretty tame for a PG-13 rating, however there is some sci-fi type action with lasers, guns, and explosions. Characters are injured.

Topics of discussion for children could be death of a parent, lying, bullying, and integrity.

Is The Adam Project Appropriate for Kids Under 13?

13 years old is a pretty solid age for The Adam Project. Kids younger than that can definitely watch, especially if they’ve seen superhero movies or even Ryan Reynolds movies. The Adam Project is a good family film for tweens and teens, as long as you’re ok with the content. The language is a bit much and could have very easily been toned down without compromising the story.

The Adam Project is a mish-mash of different genres and time periods, while delivering fan service for different films. At times it loses its focus, but dang that nostalgia got me. For starters, we have a Ruffalo and Garner reunion that will have 13 Going on 30 fans screaming “Razzle Red.”

Ryan Reynolds plays that same wise-cracking character we are accustomed to, and it works, especially with Scobell keeping up with him. Not as jovial as his Free Guy character, but better fitting this his character in Red Notice. If you have Ryan Reynold fatigue, perhaps skip this one, but I’ll be darned if he’s just so dang likeable.

The action scenes weren’t particularly noteworthy, but I assume they were restrained so families could watch this together. What caught me by surprise was how emotional I was during the film. Between Turning Red and The Adam Project, we are breaking all kinds of familial tropes. A complicated father/son relationship also reveals words unsaid, as is common in families today.

The Adam Project hits the right balance of heart, fun, and sci-fi mostly fostered through its charming cast.