Wondering if Free Guy is ok for kids? Free Guy is rated PG-13 for language, violence, and some sexual innuendos, so this gaming movie may not be suitable for younger kids. If you know Ryan Reynolds, you know he can get a little mouthy. And while there is a lot of violence, most is for comedic purposes. Here’s what parents need to know in this Free Guy Parents Guide.

A bank teller named Guy (Ryan Reynolds) loves his life. He has the same routine every day including saying good morning to his goldfish, having a hot cup of coffee, and getting robbed at the bank. But the thing is Guy is in a video game known as an NPC – non-playable character. Only he doesn’t know it until he does, then all the stakes change as his game will be going offline. And it seems like he’s just the guy who can save it.

Free Guy is rated PG-13 for language, crude and suggestive references, and strong fantasy violence which means some material is not suitable kids. Parents should know there is quite a bit of language and crude sexual references.

There is a lot of language in Free Guy including at least 9 uses of sh*t, 4 uses of a**, 2 uses of damn, 5 uses of g-ddamn, and one use of f*ck. There’s also a time when a child says motherf*cker, but it cuts off before she completes the word. Other language includes sexual words like balls and d*ck.

Since Guy is living in a video game, there is video game violence including people getting shot, guns frequently used and pulled out to threaten others, people get stabbed, things are set on fire, there are explosions, fighting, etc. However, there isn’t really blood and gore. The violence is supposed to be part of the video game and some is used for comedic purposes.

Is Free Guy Appropriate for Kids Under 13?

Free Guy was surprisingly funny, though unnecessarily crude in some parts. Is Free Guy kid friendly? Not really for younger kids. Not only is language and violence inappropriate, I don’t know that they’d be interested in the main arc of the story. It’s a combo Truman Show/Ready Player One/Wreck-it-Ralph vibe, which is a totally weird combination.

Yet somehow it works – for teens and adults. Kids who play more mature video games will probably enjoy it as some parts are like living in a real-life video game. Ryan Reynolds is charming and charismatic as usual, with some funny quotes. And there are a lot of “awww” moments as well as some incredible surprises if you’re a Marvel or Star Wars fan.

Taika Waititi is well, Taika. But even EXTRA Taika. And for as obnoxious as he can be, you can’t help but love him (sometimes). Because seriously, Taika was doing the most.

Free Guy is definitely fun! I just wish they didn’t have to put in the extra junk that wasn’t needed. The writing is witty enough without having to resort to cheap laughs.

Free Guy has heart, will make you laugh, and will just help you escape reality for a solid two hours. If you want to see Ryan Reynolds in a more action-type role, check him out in Red Notice. 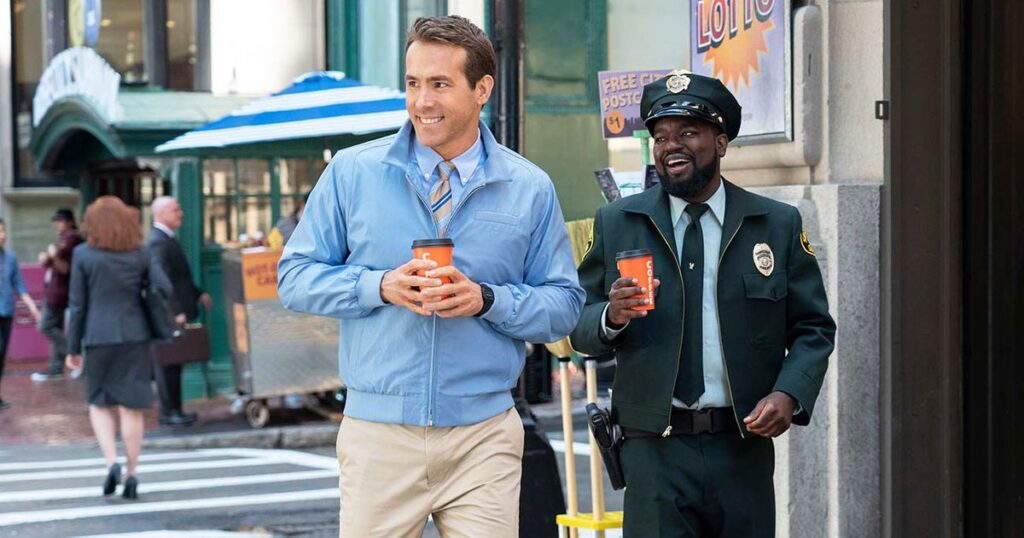 […] new. He’s becoming pigeon-holed into a character type, and I’d much rather watch him in Free Guy. Red Notice is your typical action comedy, and if that’s what you need, then you could be […]

[…] Did I miss any of your favorite quotes from Free Guy? Drop them in the comments below. If you’re wondering if Free Guy is kid friendly, check out this Free Guy Parents Guide. […]

Is Marvel's What If...? Kid Friendly? Parents Guide - Lola Lambchops

[…] these days. Reynolds holds down the fort and makes it watchable for nearly 2 hours. And although Free Guy may not be kid-friendly due to some strong language, it’s one that many families will be able to enjoy together with its […]

[…] Did I miss any of your favorite quotes from Free Guy? Drop them in the comments below. If you’re wondering if Free Guy is kid friendly, check out this Free Guy Parents Guide. […]