Is Netflix’s I Care a Lot Kid Friendly? Parents Guide.

Wondering if I Care A Lot on Netflix is ok for kids? Rated R for violence, language, and horrible people, I Care a Lot is not for kids. If you’re looking for a film to restore your faith in humanity, this isn’t it. I Care a Lot is a whole muddled mess of wicked, but Rosamund Pike almost makes it worth watching. Here’s what parents need to know in this I Care a Lot Parents Guide.

I Care a Lot Parents Guide

Marla Grayson (Rosamund Pike) is a professional, court-appointed guardian for dozens of elderly whose assets she seizes and steals from…legally. Marla and her business-partner and lover Fran (Eiza González) find their newest victim, Jennifer, (Dianne Wiest) a wealthy retiree with no living heirs or family. However, they picked the wrong lady to mess with, because she has an equally shady secret herself and connections to a gangster who is not afraid of Marla. Well Marla isn’t backing down and she doesn’t intend to lose.

What is it with the bobs and evil characters lately? I’m looking at you Behind Her Eyes. If you watch the trailer, you can get a good idea of what to expect, however then add on the R rating.

Why is I Care a Lot rated R? Parents need to know there’s a lot of violence, strong language, sex trafficking, and abuse of the elderly.

There is a lot of profanity including sh-t, a–, bit-h, a lot of the f-word, and sexual words like cun- and dick.

Women are attacked and tortured by men. Some are murdered.

The elderly are taken advantage of and are stolen from and tricked and lied to.

Characters make out and sex is implied. There is a shower scene, but no explicit nudity. A character is shown in her underwear.

There are several scenes involving fights, some with guns, many murder attempts, an attempted drowning, blood is shown from a wound.

Female characters are referred to with derogatory comments.

Is I Care a Lot Appropriate for Kids Under 16?

Bottom line, these characters are horrible people and are not good role models for anybody. This is a satirical film meant to expose capitalism. “Playing fair is a joke invented by rich people to keep the rest of us poor.” If kids are mature enough to recognize the point, then perhaps they’d enjoy the cat and mouse game, but there’s a lot of muck to wade through to get there. I wouldn’t recommend it for teens under 16 and even then, I’d still say 18 years old.

What I Care a Lot does well is even the playing field with male and female villains. It’s a battle of  the sexes and women can be just as shrewd and dirty as their male counterparts. It’s hard to know who to root for, if anyone.

Rosamund Pike is an icy queen, and she plays it so well. I found myself liking her character for a hot second and then quickly felt ashamed. Her ability to manipulate is exceptional. And Peter Dinklage is Peter Dinklage. It’s a mixture of tones, and sometimes that’s what gets confusing.

I couldn’t figure out what kind of movie I Care a Lot wants to be, and that was the biggest problem.

For more parent reviews on recent Netflix movies and TV shows, check out this To All the Boys Always and Forever Parents Guide and Ginny & Georgia Parents Guide.

← Previous
20 Best Behind Her Eyes Quotes on Netflix 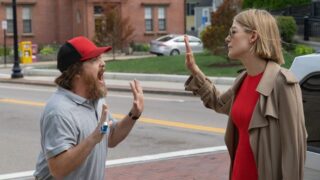 Next →
20 Best I Care a Lot Quotes on Netflix
Click here to cancel reply.