My Experience as Gunner and Engineer on Millennium Falcon: Smugglers Run

Good news – there’s a Single Rider line for Millennium Falcon: Smugglers Run! And with each ride fitting 6 people, I can see the Single Rider need to be plentiful. Note: During Covid, there is no single rider line in Smugglers Run and each party will get their own ship.

The queue line is long in Smugglers Run, but you get to see so many details! It’s incredible. You can catch most of it in the video below of a walk through of Star Wars: Galaxy’s Edge.

Guests are handed a card with the assignment of pilot, gunner, or engineer, and each is given specific tasks to perform during their experience aboard the Millennium Falcon. After your group of 6 has been given their roles (you can switch with someone in your group if you’d like), then you wait for your boarding group (by color) to be called into the cockpit of the Millennium Falcon.

Note: During Covid, they ask you in your party who would like to be what position. 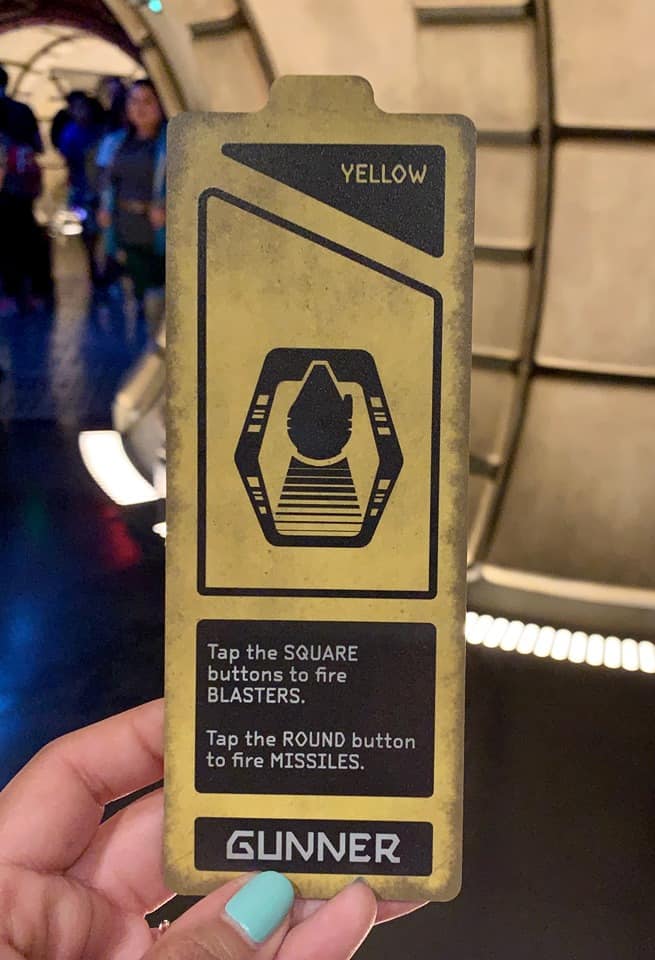 There are other photo opportunities while you wait to be called.

My Experience as Gunner on Millennium Falcon: Smugglers Run

I have now experienced all three positions on Millennium Falcon: Smugglers Run. Which is the best? It depends on what experience you want. When I first went, nobody in my group had ever ridden Smugglers Run yet, so we were all newbies. With this attraction you all need to work together. If I couldn’t be the Pilot (it’s the coolest job), I was happy to be a Gunner.

First of all, it’s exciting to be in the cockpit of the Millennium Falcon. However, the seats are placed in rows of two behind each other. I couldn’t see the control panel of the pilots, so for little kids, this may be a challenge. You can still see the screen and Tie Fighters being shot, etc.

If you can see my Gunner instructions, it says, “Tap the square buttons to fire blasters; tap the round button to fire missiles.” When I was in there, I would hit both buttons, but honestly, I couldn’t see what I was hitting. So I just sat back and fired away, not really knowing my purpose.

I think they’ve done some updates, because now as Gunner, you can hear Hondo Ohnaka telling you to hit the buttons and blast certain things. Gunner is actually quite fun!

At the end Hondo Ohnaka gives you credits depending on the condition of your ship, so hopefully your ship isn’t too damaged!

Being Engineer on Smugglers Run

On another ride I was chosen as an Engineer, and like Gunner, it’s a lot of hitting buttons. Engineer can be a little boring, but it is what you make of it.

Even though I was in the last row of the Millennium Falcon, the button would light up, I knew I would hit that one, and then sometimes the Falcon would make some kind of movement, so I felt like I was doing something. I’m not exactly sure what, but hey, it was something!

So whatever role you get, it’s still a cool experience to be on the Millennium Falcon, but Pilot is definitely the one to be, although it is a lot of pressure! I think my little ones would be just fine being Gunner or Engineer on Smugglers Run and hitting the lit up buttons on the side.

I also got to experience Millennium Falcon: Smugglers Run at night which is different scenery than during the day. Your story and screen will be in the dark. I really liked the differences, and the fact that every ride will be a new experience every time.

I’m pretty sensitive to having motion sickness, especially with 3-D and Virtual Reality rides. If I go on Star Tours, then I just close my eyes the whole time. Millennium Falcon: Smugglers Run is definitely not on the Star Tours motion sick level. You don’t need glasses for this ride, hallelujah! I’d say Flight of Passage also makes me more motion sick.

Being Pilot did make me the most motion sick on Smugglers Run. It’s because you are closest to the screen and the movement as well as everything you have to pay attention to makes me queasy.

Smugglers Run was more on the mild side, and I think it depends on your pilot as well. If your pilots make the ship move or crash more, then my stomach got very queasy. I would just have to focus my eyes on something else.

Being Pilot is fun, but it’s complicated and a lot of responsibility. You’re trying to avoid crashing into large rocks and ships, so decide amongst your party who wants to try what!

Is Millennium Falcon: Smugglers Run Worth It?

Yes! As one of two rides in Galaxy’s Edge, you have to ride both! Who hasn’t dreamt of sitting in Han Solo’s seat and piloting the Falcon?

However, for kids, I think they’ll love the experience no matter what. As an adult, I was wanting to be more involved. Rise of the Resistance is a whole other level though and not to be missed!

I was giddy just being able to walk through Millennium Falcon: Smugglers Run. If you know everyone in your group, then I could see it being more fun as you all work together and feel a connection. 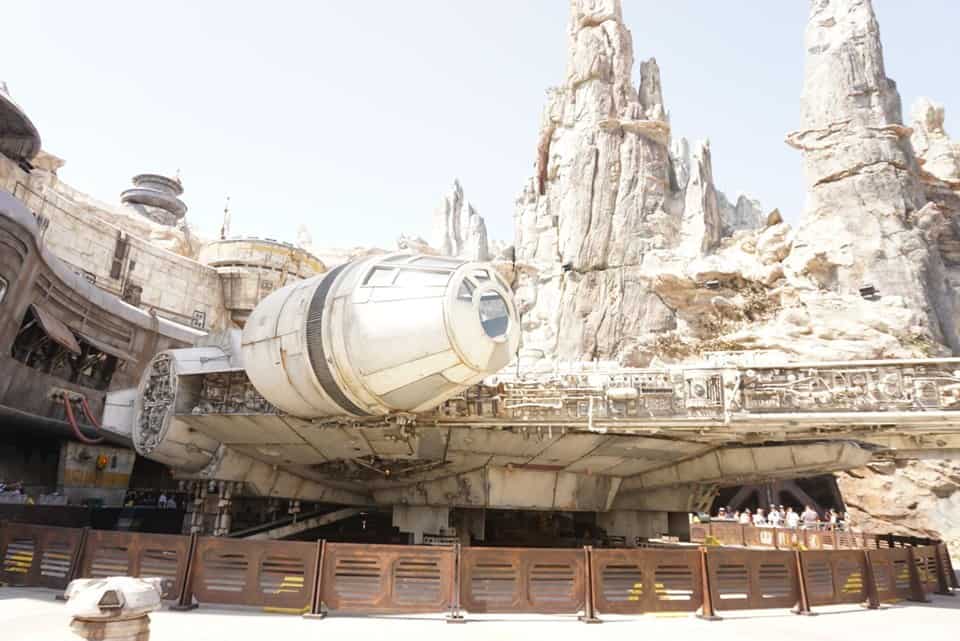 There are photo ops galore as long as you can quickly snap a picture amongst the crowds. The eye candy of the Falcon is worth it alone.

For more about Batuu, check out my guide to the best and worst foods at Galaxy’s Edge.

Next →
Is Men In Black: International Kid Friendly? Should You Take Teens?
Click here to cancel reply.

[…] lol!! This is for my Disney Galaxy’s Edge people. I even wrote a post about being an Engineer on Smugglers Run. And no, I still have never been pilot. Not bitter or anything […]

I so loved learning about this attraction. I’ve never been to Disneyland and have it on my Dream Wish List. You make it sound just as amazing as it looks!!