Is Men In Black: International Kid Friendly? Should You Take Teens?

Overall, this is not a kid friendly movie. If your kids are used to seeing Marvel movies, Star Wars movies, or Transformers, they may be fine, but some of the type of language, plus sexual content would make me pause as a parent. Is Men in Black: International ok for kids?

Language in Men in Black: International

Violence in Men in Black: International

Being that it’s a Men in Black movie and about saving the world, there’s bound to be weapons, fighting, and violence. And there was. You’ll see shoot outs, weapons of mass destruction, fist fights and aliens and people dying. There’s one particular gruesome death that was gross. If you’ve seen Shazam!, something along those lines.

Sexual and Mature Content in Men In Black: International

There are some things to watch out for kids like crude jokes, an alien ending up in bed with Chris Hemsworth, a shirtless Chris Hemsworth getting out of bed in shorts, and a gyrating alien. Tessa Thompson’s Agent M also asks Agent H if he’s “pimping her out?” She also makes a reference to fornication and butt dancing.

There is partying and many characters drinking alcohol.

Is Men in Black: International Appropriate for Kids Under 10?

I would say no. I think it’s a solid PG-13 rating when taking into account the violence, language, and mature content. Plus, it’s just slow-moving overall. Kids may want to see it, because of the Thompson – Hemsworth pairing from Thor: Ragnarok. That’s why I wanted to see it!

Don’t go in expecting that, and Men in Black: International was fairly entertaining. Thompson and Hemsworth still have some of that chemistry, but the writing, unfortunately, isn’t as good. The plot “surprises” were predictable, but there were still some good things.

Who Should See Men in Black: International?

If you’re looking for a fun, mildly entertaining film to keep you occupied during the summer, this is it. Sometimes I just want a mindless watch. Plus if you like aliens, strange creatures a la Harry Potter, or an Agents of SHIELD-type universe, then you’ll also enjoy Men in Black: International.

Even though there were slow parts, and I wanted Agent M to be a little more kick-butt, I enjoyed Thompson’s character plot line more than the drunk Valkyrie in Thor: Ragnarok.

Pawny, voiced by Kumail Nanjiani, is an adorable snarky little alien sidekick that basically steals every scene he’s in. He saved Men in Black: International for me, and you just want to put him in your pocket. 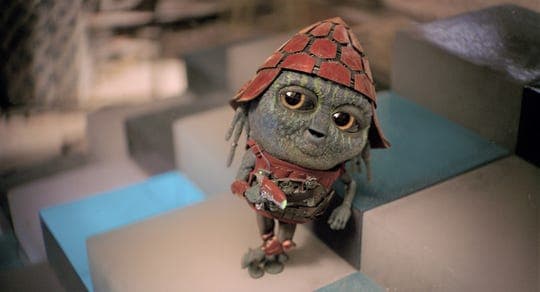 And there’s supporting roles from Emma Thompson, Liam Neeson, and Rebecca Ferguson to add to the star power.

The Men in Black have expanded to cover the globe but so have the villains of the universe. To keep everyone safe, decorated Agent H and determined rookie M join forces — an unlikely pairing that just might work. When aliens that can take the form of any human arrive on Earth, H and M embark on a globe-trotting adventure to save the agency — and ultimately the world — from their mischievous plans.

← Previous
My Experience as Gunner and Engineer on Millennium Falcon: Smugglers Run