Is Army of the Dead Kid Friendly? Parents Guide

Army of the Dead Parents Guide

ARMY OF THE DEAD takes place after a zombie outbreak that has left Las Vegas in ruins and walled off from the rest of the world. Scott Ward (Dave Bautista), is a displaced Vegas local, former zombie war hero who’s now flipping burgers on the outskirts of town, He’s approached by evil casino owner, Bly Tanaka (Hiroyuki Sanada), with the ultimate proposition: Break into the zombie-infested quarantine zone to retrieve $200 million sitting in a vault beneath the strip before the city is nuked by the government in 32 hours.

Since he doesn’t seem to have much left, he figures why not and maybe it’ll help pave the way to a reconciliation with his estranged daughter Kate (Ella Purnell). Ward takes on the challenge and of course assembles a ragtag team of experts for the heist. Scott finds an unexpected emotional hurdle when Kate joins the expedition to search for Geeta (Huma S. Qureshi), a mother who’s gone missing inside the city. With time against him and a bunch of blood-thirsty zombies coming, will this crew survive?

Why is Army of the Dead rated R? Parents need to know that Army of the Dead is gory, full of violence, and even some nudity and sexual content. Yes, there are topless female zombies. The plot couldn’t have survived without them.

Army of the Dead is full of profanity including sh** and fu*k. There are at least 50 uses of them combined. There are also uses of damn and a**, with words of Deity used.

The violence is heavy with gore and blood. It’s an all-out zombie war and one of the opening scenes just has zombies’ heads being blasted off.  Characters are impaled, decapitated, blown up, burned, etc. A zombie’s head is sawed off and when the head falls off, it’s still alive. A man is eaten by a zombie tiger, and you can see his mauled face.

There is some nudity as topless female zombies kill a man and in another scene you can see nude people in the background getting hosed off. There is also a scene with implied oral sex while driving and a man puts his head back and moans. Another character is accused of being a rapist, which could be triggering for some people. 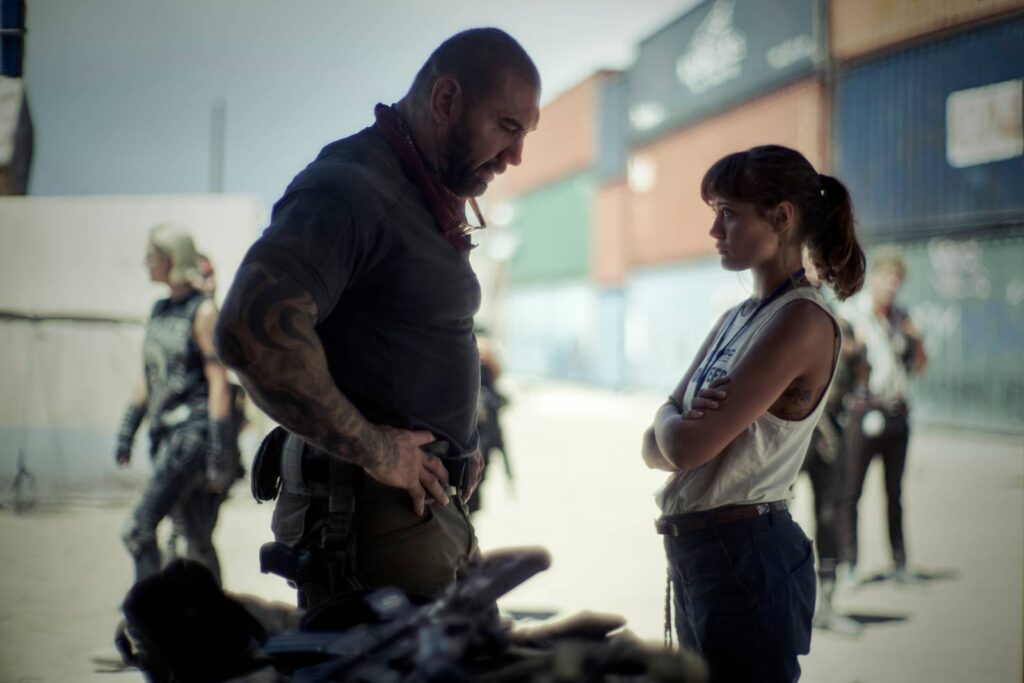 Is Army of the Dead Appropriate for Kids Under 18?

Army of the Dead is your typical Zack Snyder blow ’em up, graphic violence, no real story-telling movie. If you like Zack Snyder’s style, then I imagine you’ll love this one, too. I would not recommend Army of the Dead for any kids, but you know your child. If this is the type of stuff they like, then the real concern is probably the nudity and extreme violence.

There are a lot of subplots in this film, but it’s way too long. A zombie film with an Ocean’s Eleven heist? It maybe could have worked, but it lacks originality. Snyder had a big budget, and he used it for some really cool visuals, but that’s not enough to make me like this movie.

The good thing is that I don’t think Army of the Dead takes itself too seriously. So, if you want some good ‘ol fashioned zombie violence, Zack Snyder delivers.

I’ll just be over here waiting for In the Heights to be released in theaters.