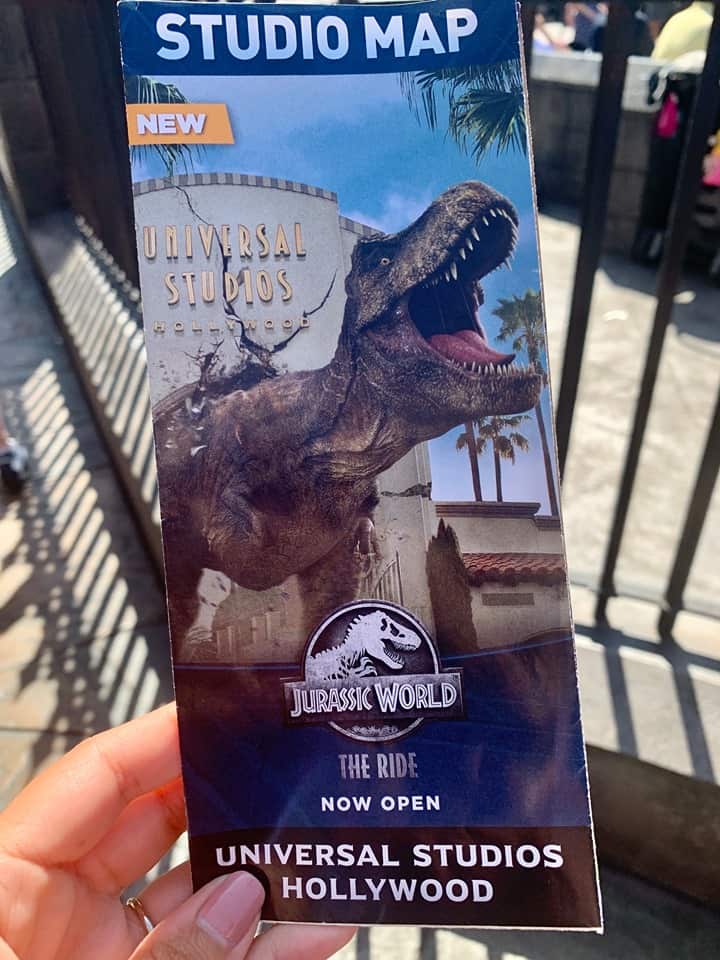 Harry Potter, duh. Even if you’re not a fan, you’ll definitely want to take a walk inside another world. Not only will you ride one of the best attractions ever made – Harry Potter and the Forbidden Journey – but they also have Butterbeer. 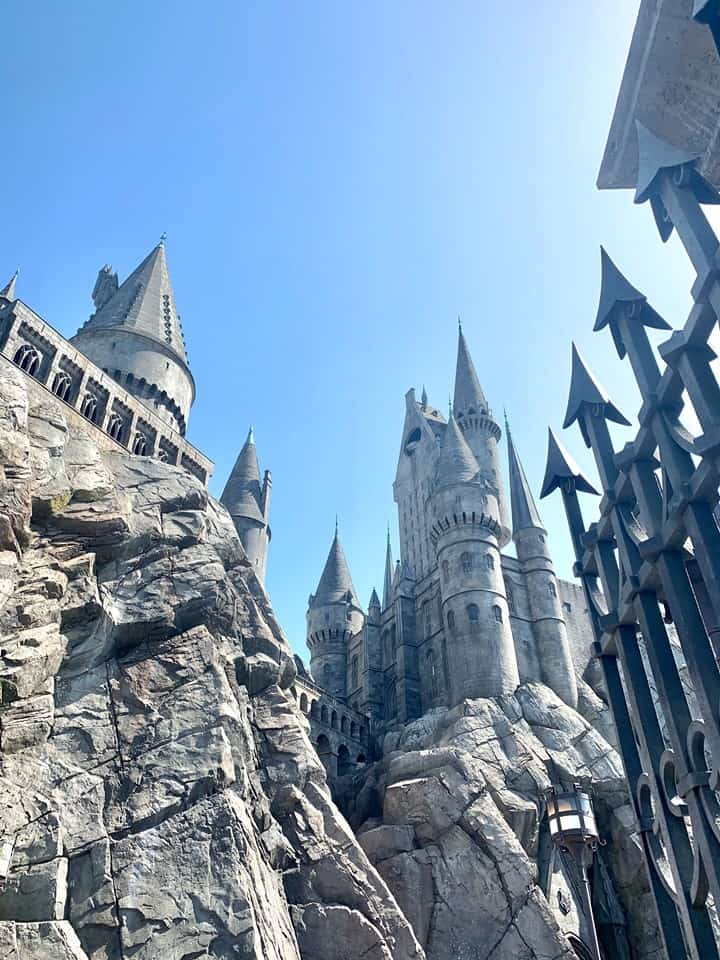 Harry Potter and the Forbidden Journey is incredible, but it also makes me motion sick, not because of the ride movement, but because of the movement combined with the 3D effects. I’ll still ride it, though, because it’s that good. I just close my eyes during the 3D parts when I start to get a little woozy. Afterwards, I reward myself with Frozen Butterbeer. 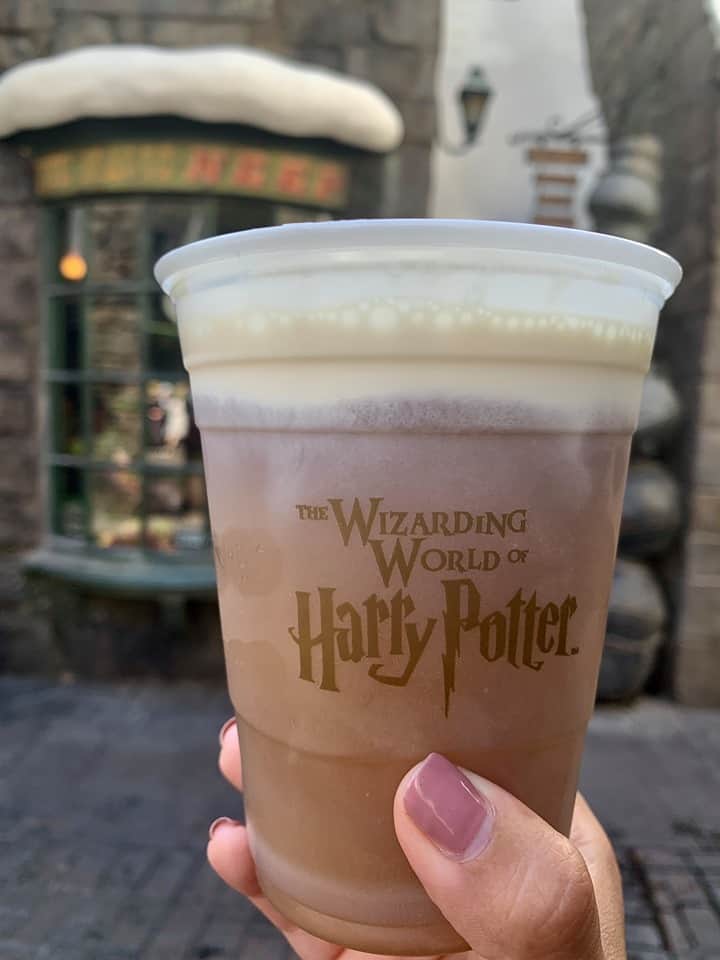 Look inside the shops at Hogsmeade, grab a bite to eat at Three Broomsticks (I recommend the Shepherd’s Pie), and grab more treats at Honeydukes. Chocolate Frogs are always on my kids’ favorite souvenir lists!

If you find yourself on the East Coast, check out my must-dos at Diagon Alley!

The newest ride to open at Universal Studios, Jurassic World, should be at the top of your must-dos if you love water and thrill rides! Start off with a little video starring Chris Pratt (I mean, do you need any more convincing?), then board your vessel and go on an epic adventure. 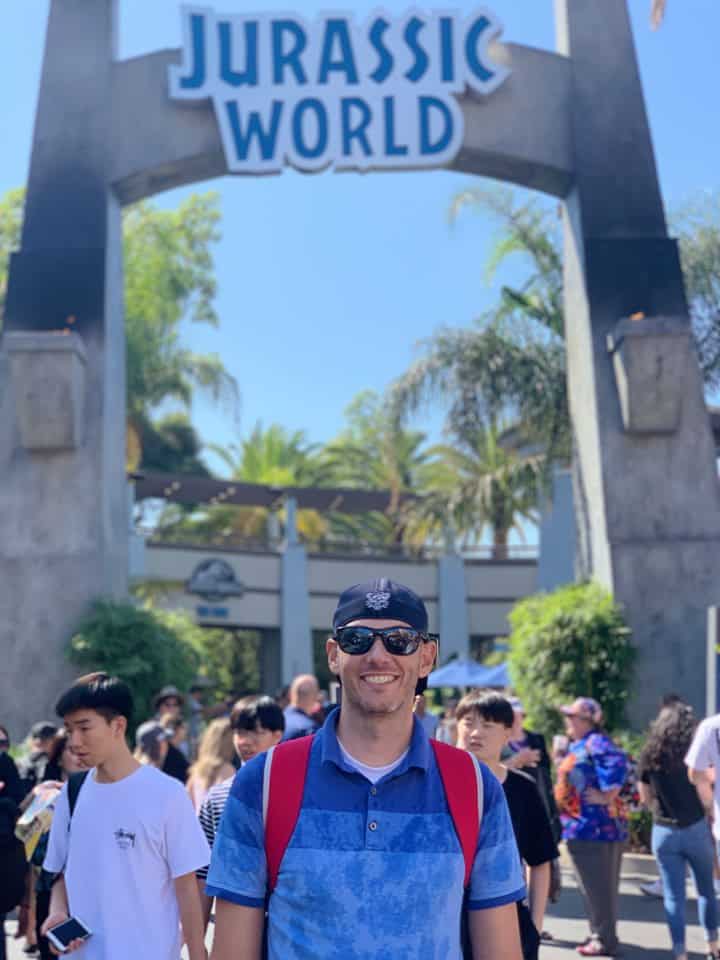 This ride has been updated to include new scenes and be careful, because there are dinosaurs everywhere! You’ll end your adventure with an 85-foot drop! You may want to wear a poncho, because you’ll most likely get wet, but not in the spot you think you will. Surprise!

Then meet Blue the Velociraptor and a new Triceratops at the Raptor Encounter. Jurassic World is your go-to place for dinosaur fans!

Despicable Me: Minion Mayhem is a great family attraction for those who aren’t super thrill seekers, but still get a chill!  It’s a fun 3D experience that kids will enjoy, but they do have to be over 40 inches tall. Join your favorite Despicable Me characters like Gru, Agnes, Margot, and Edith.

Start your adventure in Gru’s home, where you’re recruited for his latest scheme. Within moments, you’re launched into an unforgettable trip through his super-villain laboratory and even become a minion. You’ll conclude with a Minion-inspired dance party, so don’t be shy and get your groove on.

We were lucky enough to grab a picture with Margot and Edith afterwards! 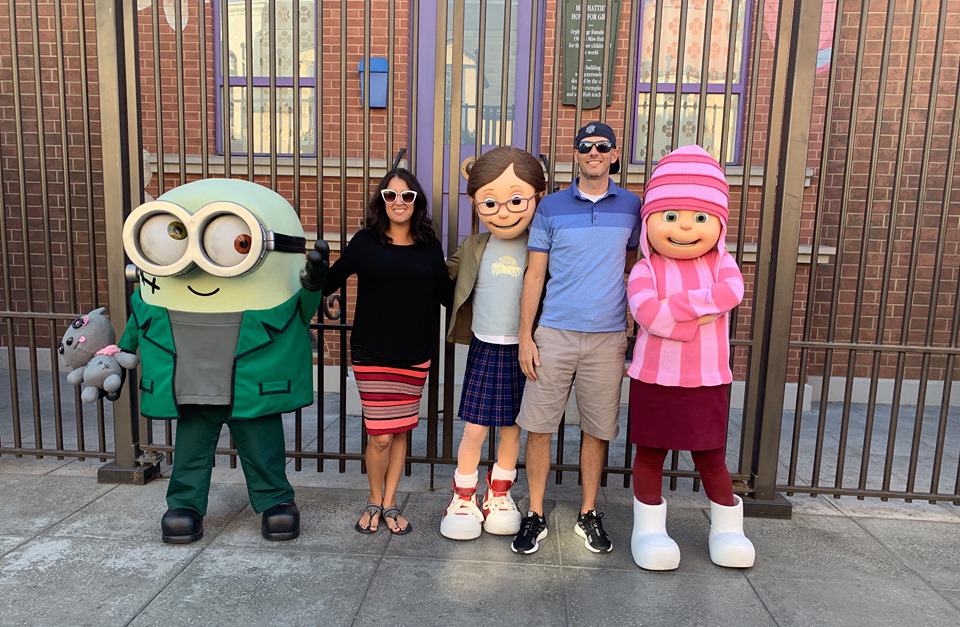 The Studio Tour is one of the most unique things about Universal Studios Hollywood and any theme park. The best thing is it’s included with your park admission!

The Studio Tour is a 60-minute tram ride through the back lot, where you’ll see movie sets from the past and even live working sets. You may just catch a glance of a celebrity. Plus it’s a great time to rest your feet, but make sure you use the bathroom before you board, because there is nowhere to stop along the way.

There are monitors in each car, so you can see your live tour guide pointing out details as you ride through the set. Jimmy Fallon also brings the funny in several appearance on the TV monitor in pre-recorded segments.

One of the highlights for me was riding through the set of one of my favorite TV shows – The Good Place! Holy shirtballs it was cool! 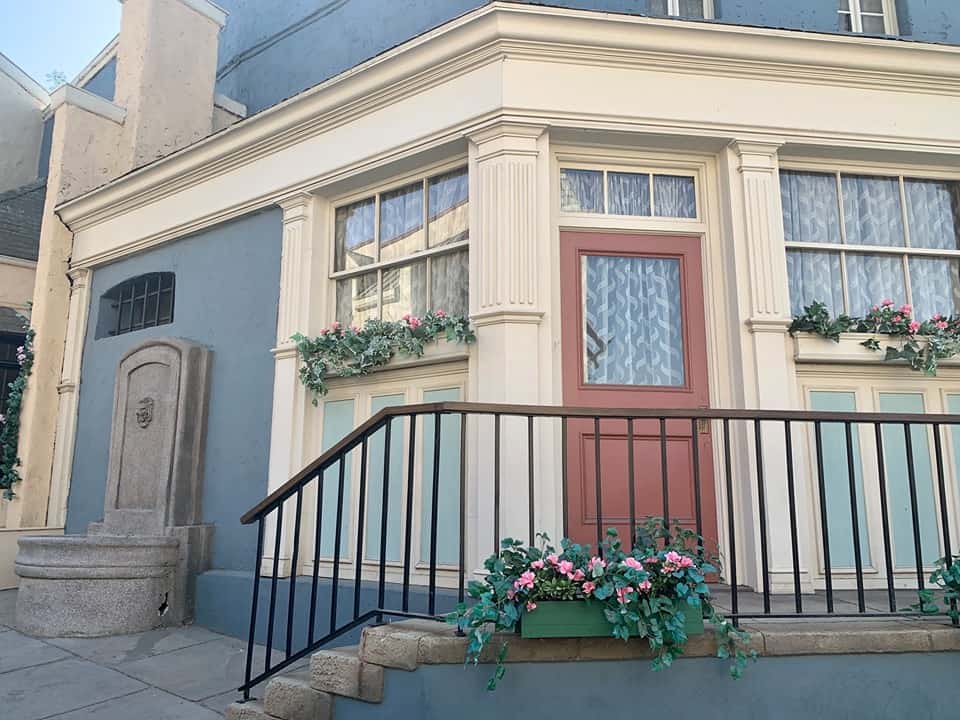 You’ll also experience newer movies like Peter Jackson’s King Kong 360, experience an earthquake, a flash flood, fire and go for a high-speed chase in Fast & Furious – Supercharged! If you’re more into the classics, then Jaws and Norman Bates will be waiting for you, too. 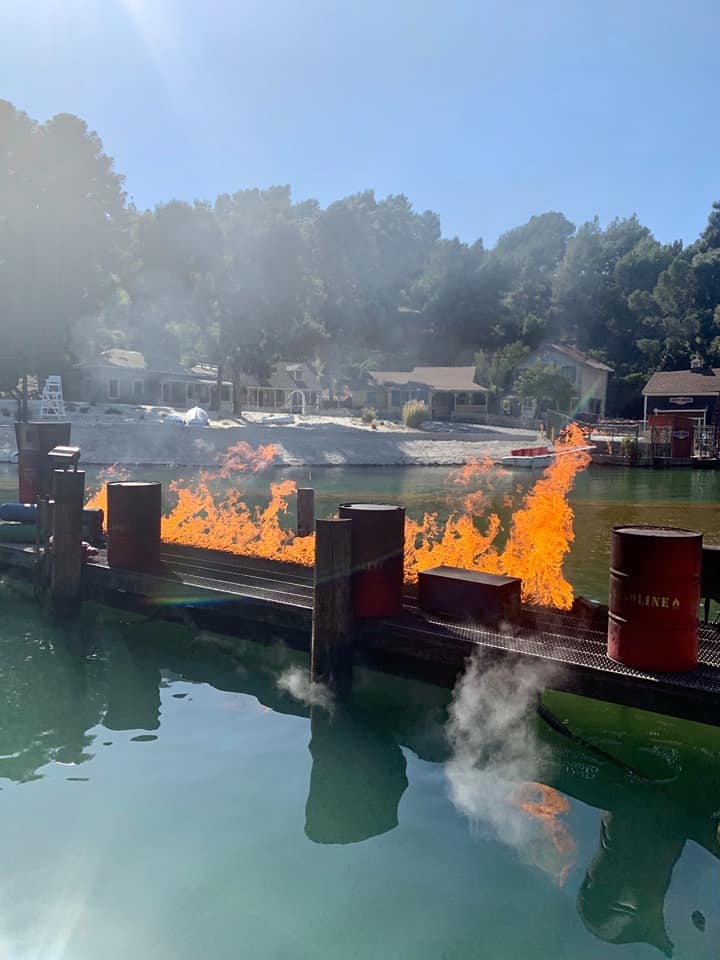 I would not skip the Studio Tour!

I don’t care how young or old you are, but character meet and greets are fun! You never know what kind of interaction you’ll get and what stellar photos may come out of a visit. I love Universal Studios Hollywood, because they often have characters walking around and some in their respective “lands.” 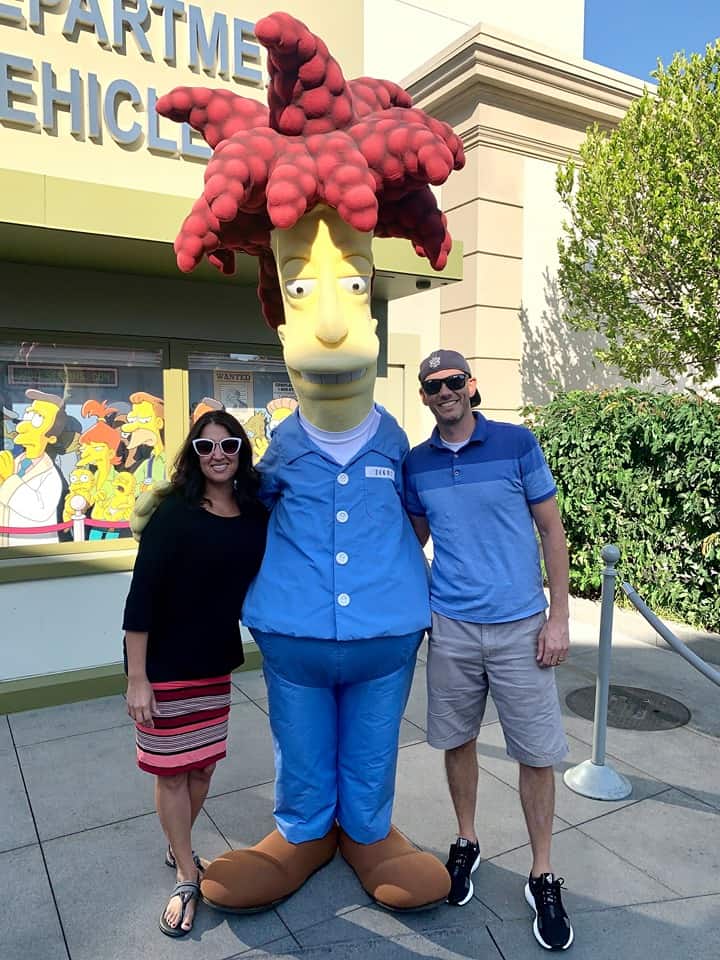 I used to be a huge Simpsons fan when I was younger, so when I caught a glimpse of Sideshow Bob, I had to stop! He danced with me, tried to steal my drink, and blocked my husband out of another photo. I love that joy when I feel like a kid again. You

The lines were often short, and they are memories that I’ll treasure! Keep an eye out for more Simpsons characters in Springfield, too!

There is plenty to do and see at Universal Studios Hollywood, so don’t forget the must-dos! Check out a map ahead of time and choose your top attractions, then add in with favorite shows and snacks. And if you want to get festive, check out Universal Studios for the holidays! 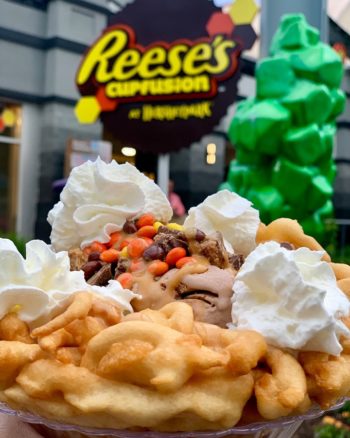 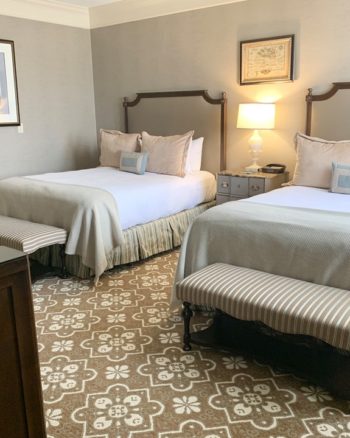 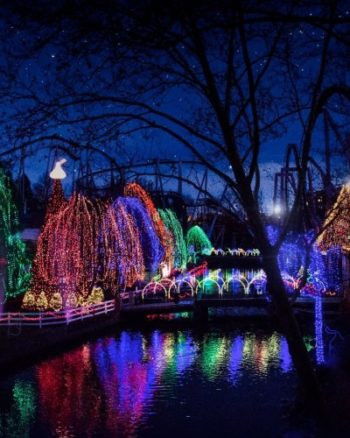 What to Expect at Christmas Candylane at Hersheypark in 2019
Categories: Theme Parks, Travel