Don’t get me wrong, Hogsmeade in Universal’s Islands of Adventure is magnificent, too! Diagon Alley just happened to be my jam. It was like the angels started singing when I rounded the corner and felt as if I had stepped right into a Harry Potter book. All those details tho! It doesn’t matter if you’re in elementary school or an adult, Diagon Alley will surely make you smile.

Harry Potter and the Escape from Gringotts

This is the one attraction in Diagon Alley, and I loved it! Walking through Gringotts itself is an attraction. You walk through the bank’s lobby all while keeping an eye on goblins working (or maybe they were keeping an eye on you), go through passageways, into Bill Weasley’s office, up an elevator and a winding staircase to board the attraction. My eyes were already wide from excitement, but then the multi-dimensional adventure through the vaults of Gringotts was thrilling and amazing.

If you want more of a thrill, sit in the back. There is a drop at the beginning of the ride, so the further back you sit, the more of a drop you get. I don’t like drops, so I request the front and they are happy to oblige.

Side note: I love Universal’s Child Swap service. Your children who do not meet the height requirement or who don’t wish to ride can walk with you through the line and then wait in a room close to the boarding area for the ride. They show clips of Harry Potter and you’re out of the heat and rain while you wait. Then when the rest of your party is finished, they meet you in that room, you switch, and you get right on the ride. It’s so easy!

Wands at Ollivanders: Makers of Fine Wands since 382 BC 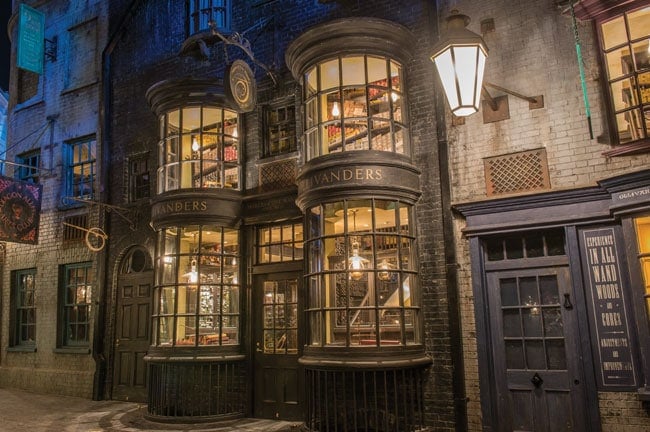 It’s really fun to watch a wand choosing at Ollivanders. The wand chooses the wizard or witch. We went right before the store was about to close and our family was the only family in there. What were the chances one of my children would be chosen? 😉 Luckily my oldest was chosen, and she was very excited and old enough to understand the meaning and the importance of having a wand choose her. My other girls were thrilled to be able to go shopping and choose the wands of famous wizards in Harry Potter. They chose the wands of Hermione, Ginny Weasley, and Professor McGonagall. My youngest chose a toy wand that lit up, and she was in heaven.

The wands are a little pricey, but for $8 more (which make them almost $50), you can buy an interactive wand. No brainer and worth every penny, because you get a map with the purchase of your wand, and my daughters had a ball finding all the interactive activities.

Classic spells. Make the eyeballs move. Make the umbrella rain with a flip of your wand. You actually have a marked spot to stand on and must move your wand in a certain pattern. Some were easier than others to master. We made it rain at least 30 times. It was that funny every time. So while the kids ran around Diagon Alley with their wands, I did this…

No lie, watching the Dragon on Gringotts was hypnotizing. Every 10 minutes the dragon breathes fire, and every single time I would cheer like a school girl. I watched it from different angles, in the morning, afternoon, and night. I was addicted. There I said it, and admitting it is always the first step. But you know what they say, never tickle a sleeping dragon.

Gringotts Money Exchange is a separate building from the ride. You can bring in your dollars and exchange them for Gringotts Bank Notes. They are available in $10 and $20 increments and can be used to purchase merchandise around Universal Studios. They are a fun souvenir, but my daughters opted to spend theirs. The goblin at the desk speaks and interacts with you, too. So awesome.

Eat all the ice cream! Drink all the Butterbeer! I like ice cream, but I can’t say it’s my jam. The ice cream at Florean Fortescue’s Ice-Cream Parlour is my jam. First of all, hello Butterbeer ice cream! Yes, I’m going to have to say it’s more amazing than Frozen Butterbeer. I’m sorry. #SorryNotSorry You’ll have to be the judge though.

But not only is the Butterbeer flavor outstanding, I found other favorites, too. I’m looking at you pistachio, salted caramel blondie, and sticky toffee pudding. These are the benefits of having a large family, plenty of people to share with, so I had to try many flavors. I won’t mention how many times we went back. But seriously, go. Try a flavor you wouldn’t normally try. You won’t regret it.

As an extra bonus, you can have a photo op outside of Diagon Alley with the Knight Bus. Squee! The conductor was pretty chill, so we tried to play it cool, too. Even though on the inside, I’m screaming, “This is so cool!” 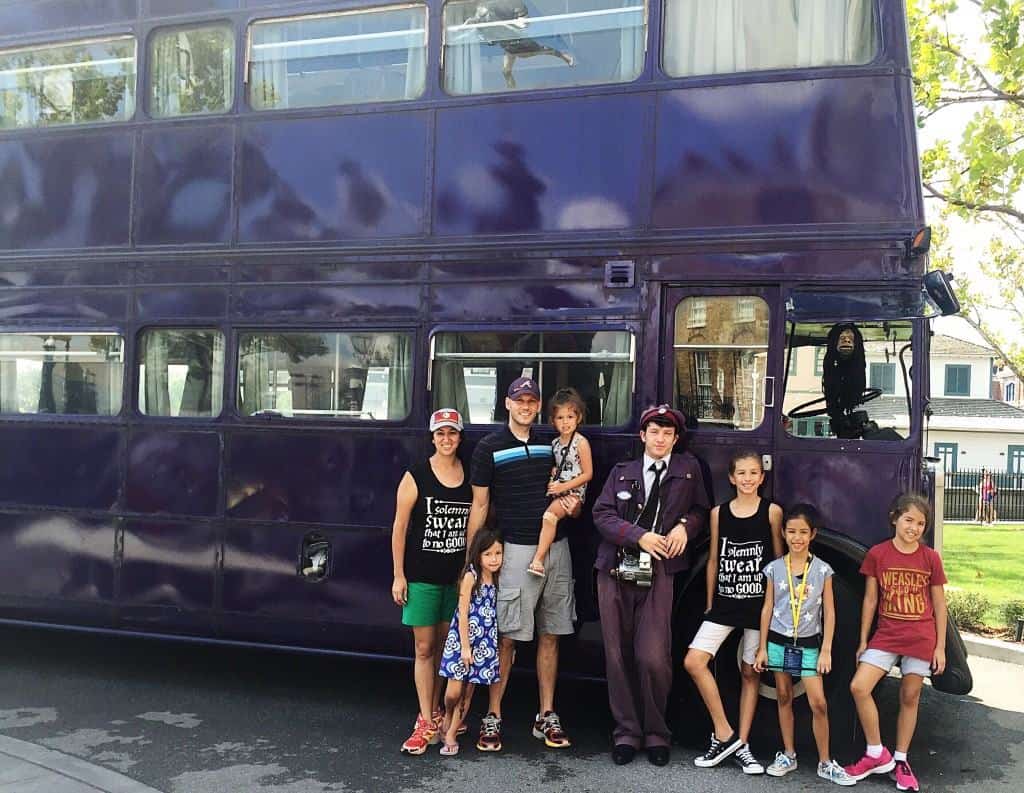 Diagon Alley was an every day visit for us. We kept coming back and nobody got bored or asked to leave. We waited until they kicked us out at park closing. I recommend Park-to-Park admission, because I can’t even begin to describe the awesome that is King’s Cross Station and the Hogwarts Express. Riding the train back and forth between parks was a highlight for my children. All my girls are now full-fledged Harry Potter fans and have come home wanting to read and watch Harry Potter everything. This is something I can fully support, except when they start trying to cast spells on me.

What are your must-dos at Diagon Alley or your favorite things at Universal Orlando? 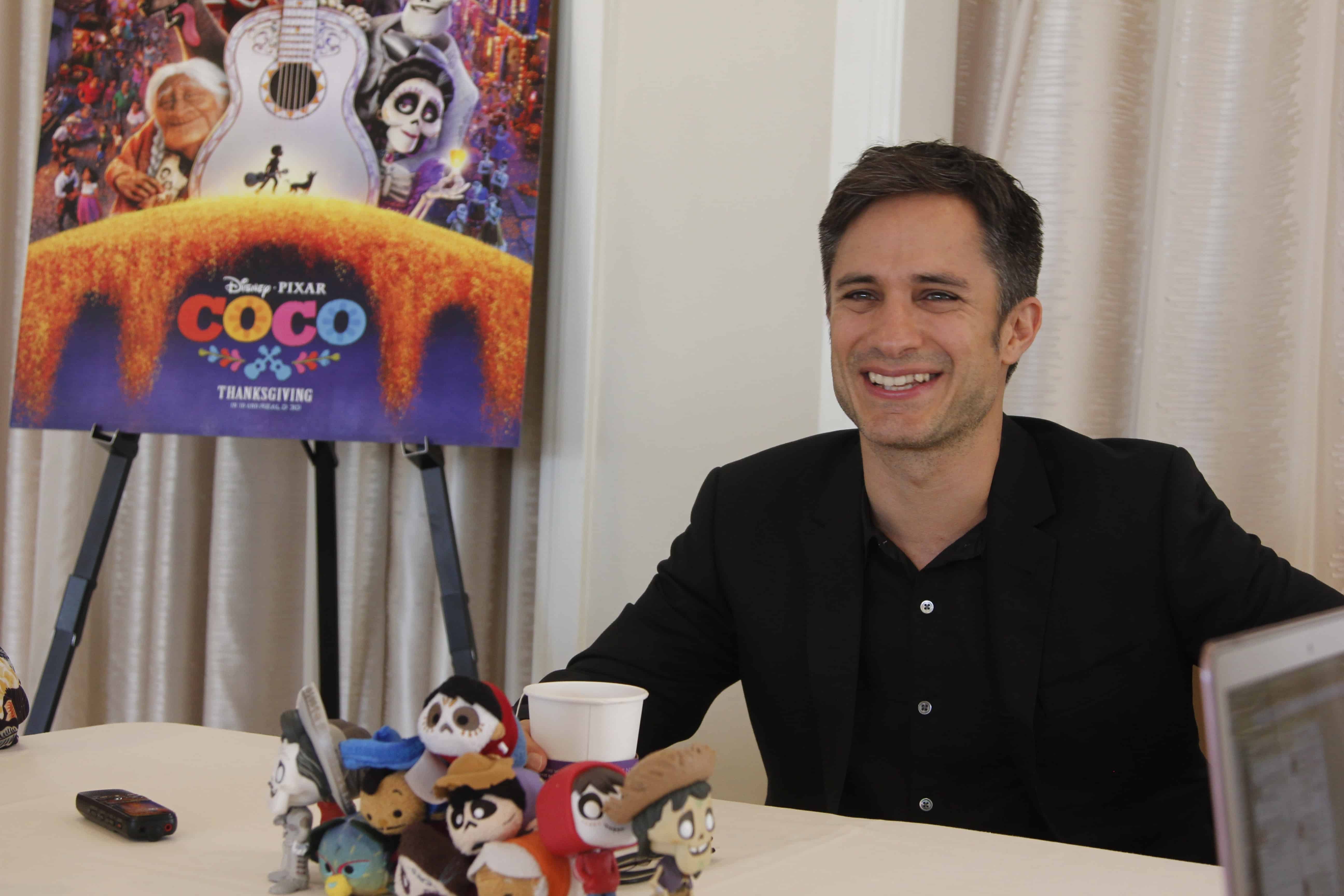 Next →
Last Minute Holiday Travel | Being Home for the Holidays
Click here to cancel reply.

[…] you do get some pretty awesome pictures with hardly any people in the parks, but my favorite is Diagon Alley! Universal Studios was the park available every day and most people got in line for Harry Potter […]

[…] If you find yourself on the East Coast, check out my must-dos at Diagon Alley! […]

Awesome tips! I love Diagon Alley. I think my favorite thing from this past year's experience was taste testing all of the drinks. They are so creative with their food and beverage choices. Well, and just the whole place.

PS: I love your family picture by the bus. Cute!

Yes! So many choices! My goal is to try every ice cream flavor :)

Oh I so want to go back! Especially for that butter beer. Delish!