Wondering if Nightbooks on Netflix is ok for kids? Nightbooks is rated TV-PG for violence and fear. Not gonna lie, some parts are a little psychotic and creepy as hell. Nightbooks is not kid-friendly for all kids, even with that PG rating. I probably would have rated it at least TV-14. Here’s what parents need to know in this Nightbooks Parents Guide. 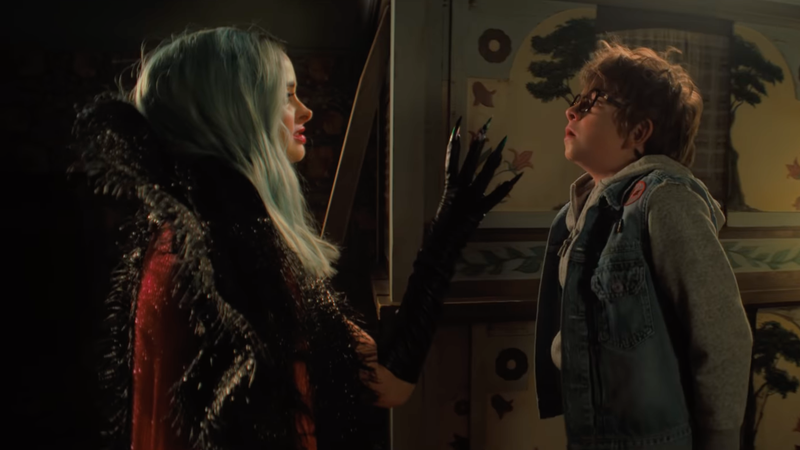 Nightbooks, based off the book by J.A. White, is essentially a horror movie for kids. But is it really for kids? Alex (Winslow Fegley) is a creative boy with a passion for writing scary stories.  However, when friends and kids at school call him weird and make fun of him for what he likes, he swears he’ll never write another scary story again.

An evil witch named Natacha (Krysten Ritter), captures him in her magical apartment in New York City and demands that he tell her a new scary story (NO HAPPY ENDINGS ALLOWED) every night if he wants to stay alive. However, Alex swore off writing scary stories and has cases of writer’s block.

Trapped inside the apartment is also Lenore, the witch’s spiteful cat watching his every move. Alex meets Yasmin (Lidya Jewett), another young prisoner who has managed to stay alive, but has become very cold and bitter. She just wants to be left alone. Will they ever escape and return to their families? Not if Natacha has anything to do with it.

What is Nightbooks rated?

Nightbooks is rated TV-PG for language, violence, and scary elements. Like I said, I would rate Nightbooks TV-14, because movies like Incredibles 2 is rated PG, and this is no Pixar movie. Kids under 14 can definitely watch it, but parents need to know Nightbooks has very scary elements for children.

There are a few words like damn, hell, and stupid to watch out for. Also the phrase “oh g-d” is used quite a bit.

I can’t even list all the horror film elements, but there are a lot of creepy things that will make kids jump and possibly give them nightmares.

Is Nightbooks Appropriate for Kids Under 10?

If your kids enjoy scary and spooky, then Nightbooks is a good transition into scarier films like Nightmare on Elm Street or Lost Boys. If they’ve already seen those movies, then they’ll be fine. If your kids do not like the villains in Disney movies, then skip this one or you’ll be dealing with tears.

I’d recommend Nightbooks for kids 10 and older, but you could go younger if they love the horror genre. Although there are some disturbing scenes and frights, Nightbooks also does well at adding warmth and some lightheartedness to balance out the jumps.

It’s heartbreaking to hear Alex say he wants to be normal or to fit in, but Nightbooks has a fresh approach to this important message of being yourself and embracing what makes you special, especially if it’s something you’re passionate about.

Ritter, Fegley, and Jewett are all phenomenal. Ritter especially has a way of playing such a delicious villain. She has a knack for playing characters that are out of the ordinary, and Natacha is complicated. She threatens the children, but also gives them attention they sometimes need. Plus those costumes…perfection.

The stylized way Nightbooks is shot adds to the character and charm. Nightbooks is great fun and one I’d watch on repeat if it didn’t scare me so much.  The perfect Halloween family film for those who need an extra scare!

Nightbooks is now streaming on Netflix.

← Previous
The BEST Ted Lasso Memes To Make Your Day

Next →
The Stars of Do, Re & Mi Stress The Importance of Music Education
Click here to cancel reply.

[…] on Netflix is a really great scary movie for kids who want something more frightening than animated movies, but aren’t quite ready for the […]