Spies in Disguise is the first animated spy movie for kids, so think James Bond for the little ones. But is Spies in Disguise kid friendly? It’s rated PG for violence, guns, action, rude humor, plus a couple of naked behinds. So I would recommend it for families, but with an asterisk. Overall, Spies in Disguise is family friendly, but let’s talk about where it may not be ok for all kids. 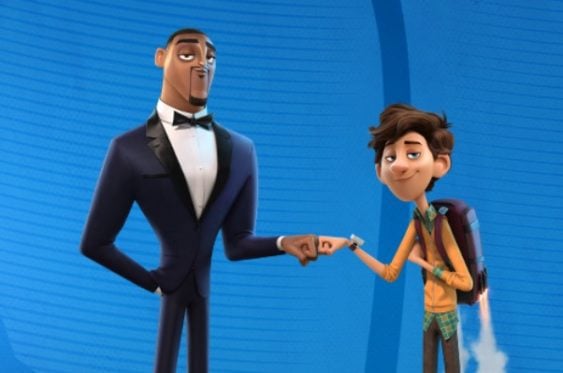 Is Spies in Disguise Kid Friendly?

Super spy Lance Sterling (Will Smith) and scientist Walter Beckett (Tom Holland) are almost exact opposites. Lance is smooth, suave and conceited, Walter is not. Events take an unexpected turn, and this unlikely duo is forced to team up for the ultimate mission that accidentally turns Lance into a pigeon. Yes, a pigeon.

Walter and Lance suddenly have to work as a team, or the whole world is in danger. Spies in Disguise provides topics for difficult conversations with kids, but overall leaves you with a message of hope and teamwork. But I’m still not on board with animated nudity, even for laughs. Let’s take a look at the language, violence, and mature content in Spies in Disguise.

There is no profanity, but there is a lot of potty talk and gross humor that involves talk of butts and how birds use the bathroom. So if you bring little ones, just be prepared for some repeating of phrases. There is also one instance where they bleep out a bad word.

Being a spy movie there is quite a bit of violence. The opening scene is a little intense with guns and fighting, but being that it’s animated softens the blow. Overall I think Spies in Disguise had a good balance of being an action movie without going overboard or crossing the line.

There are a couple of heavy topics to discuss with kids like death of a parent and being considered weird and not fitting in. You’ll also find unnecessary things like a large animated butt on screen when the bad guy’s towel drops, a side naked butt shot when Lance Sterling transforms into a human, and then a shot of Lance checking down his pants when he turns into a pigeon.

Is Spies in Disguise Appropriate for Kids Under 8?

My kids have been excited for Spies in Disguise since they saw the previews, because when you do say things like, “I can see my butt and your face at the same time,” and other Spies in Disguise quotes, then it tends to get a laugh from the younger crowd and is repeated around school. If kids are fans of Spider-Man, then they’ll want to watch Tom Holland voice Walter Beckett.

Is Spies in Disguise safe for kids? I would recommend it for kids ages 8 and older as long as you don’t mind hearing some of the gross humor being repeated around the house. Could kids under 8 still be safe watching Spies in Disguise? Sure. It all depends what you’re comfortable with and at 1 hour and 44 minutes, the movie does get a little slow in some parts, but for the most part the jokes and action are plentiful. Some jokes will go over some kids’ heads, so Spies in Disguise is ok for most kids.

At first glance, the whole pigeon thing is indeed weird, but like the movie says, “What’s wrong with weird? The world needs weird.” I, perhaps, have a little more grace for this movie, because of its ’embrace the weird’ message. I’m tired of hearing that word used as a derogatory word, as an insult. Let kids be who they are without fear of backlash of not fitting in to a stereotype. <Gets off soapbox.>

Will Smith and Tom Holland have great chemistry; plus they make a fabulous team and show how the cool kids and the “weird kids” all contribute and make a difference. The best message of all is that violence isn’t the answer. This is so important for kids and adults.

With cute surprises like kitty glitter, Korean soap operas, and 50 shades of yay, Spies in Disguise is fun for the whole family with a lot of heart. The message is clear, Spies in Disguise teaches us that weird is good, teamwork is best, and friendship is important. Next time, just leave the butts out of it.

Spies in Disguise is in theaters Christmas Day!

Is Jumanji: The Next Level kid friendly? 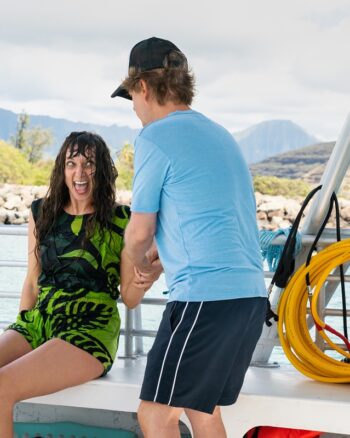