Is Avengers Endgame Kid Friendly? A Guide for Parents

We’re in the endgame now with the Avengers. The end of Phase 3 in the MCU, it seems. Emotions were high when we last saw The Avengers in Avengers: Infinity War, so where does it pick up and is Avengers: Endgame kid friendly? Well as you can imagine, desperate times call for desperate measures, and sometimes that high level of intensity is not ideal for little kids. Here are the details on language, violence, mature themes, and sexual content in Avengers: Endgame in my non-spoiler review.

Avengers: Endgame earns its PG-13 rating for language and violence. However, I’d also be concerned with some mature themes. The information below is presented so that you can make your own decisions whether Avengers: Endgame is appropriate for your children and family.

There’s not a ton of review I can give to avoid spoilers, but I will at least try to present information to help make an informative decision.

For a Marvel film, there was a lot of language in Avengers: Endgame. However, I think that’s been the case more and more with the newer films. A lot was used for humor, but let’s get to the countdown.

I watched this at the L.A. Premiere, so I may have missed a few of the profanity due to the excitement.

Overall, the language is noticeable and words by characters you wouldn’t expect. The majority of them are completely unnecessary, but it is what it is. Some did get a laugh, and I think were used to lighten up tense situations.

The violence in Avengers: Endgame is about the same as Avengers: Infinity War. There are fights, explosions, disgusting-looking creatures, and death.

There is one scene with Hawkeye that is particularly violent and disturbing. There’s gunfire, swords, stabbings, and heads being chopped off. If I had to choose a scene to cover little ones’ eyes, this would be it.

Be cautious of the mature themes in Avengers: Endgame, too. Yes, there’s death, grief, and suffering so that will be unsettling for small kids, especially those who may have dealt with death of a loved one recently. There are also complicated relationships that may be tough for empathetic children with sensitive feelings.

There is no strong sexual content in Avengers: Endgame. There are at least two kisses.

Is Avengers: Endgame Appropriate for Kids Under 10?

Ideally I would recommend Avengers: Endgame for ages 12 and up. If your kids are fans of the Avengers films, then they are going to want to see it. I don’t blame them, the hype is real.

However, I would let my 10-year-old see this if she wants to. My 8-year-old and my 6-year-old really want to watch Endgame, because they want to know how it ends. However, I may wait for this to be on video for the younger ones, so I can fast forward certain scenes.

The things that make me pause most are the language, mature content, and the length. Sure my kids hear worse in school. However, when you are also marketing a film to children, and there are things (like language) that can be avoided that add nothing to the story, I don’t understand the point. I just wish Marvel would be more mindful of that.

Also, Avengers: Endgame is 3 hours long. It’s long, and at least the first hour or so is a little slow. There’s a lot of explanation and buildup that needs to be done.

Some kids may be antsy, and there is so much packed in, that I need at least a viewing or two without the kids. But go in dehydrated, because you can’t take a bathroom break or you’ll miss something.

If you really can’t hold it, because the soda and popcorn lured you, then my friend, Patty, has some recommendations of when you should use the bathroom during Avengers: Endgame.

Is Avengers: Endgame Worth the Hype?

Buy your tickets (adults and teenagers), watch the movie, and watch it again. You thought Infinity War took you for a ride? Well Avengers: Endgame takes you on a roller coaster of emotions and you’re unsure whether you want to scream out of exhilaration, joy, or pain. I did all 3.

I highly suggest watching as many Marvel movies as you can before you see this film. You’ll thank me later. Check out these Marvel movie lists of what to watch before Avengers Endgame.

You may think you know what will happen in Avengers: Endgame, but you don’t. This is a careful symphony orchestrated by the Russo Brothers, almost a love letter to the original 6 Avengers. And I sign my name with the rest of the fans.

While Avengers: Endgame may not be perfect, I forgot about its imperfections and cheered with the rest of the crowd at several thrilling and perfect moments. You may want to leave the younger kids at home for Avengers: Endgame due to language and violence, but the older kids will be talking about it at school for months to come! 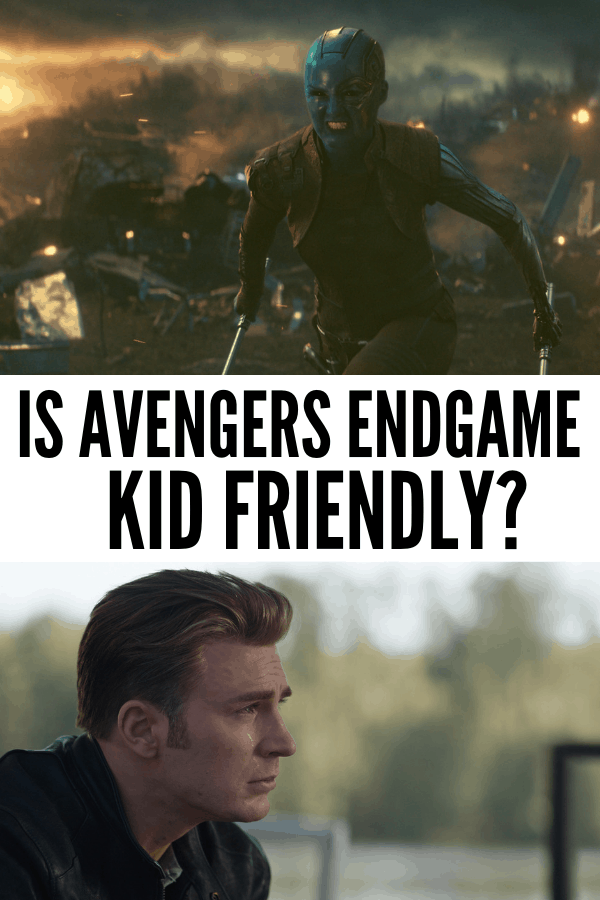 […] guns, and martial arts. Some scenes are a little graphic, but not quite as bad as the scene in Avengers:Endgame when Ronin makes an […]

[…] for the next film. Eternals just didn’t do it for me. If I need an almost 3-hour Marvel film, Avengers: Endgame will be my […]

[…] down because well I like to just sit back and enjoy the movie. But my friend Tania wrote a fantastic post that details everything in the movie and whether or not it’s […]

[…] the exciting conclusion to the battle against Thanos. You can check out my parent movie review if Avengers: Endgame is kid friendly […]