Dear Evan Hansen is not a filming of the musical, like Hamilton on Disney+. They’ve turned the popular musical into a motion picture with Ben Platt as Evan Hansen (the original Evan on Broadway). Evan is a high school senior who doesn’t really have any friends, except Jared, a family friend. He’s a bit socially awkward and has had a crush on Zoe Murphy (Kaitlyn Dever) for a long time. This year was going to be different, at least that’s what he told himself in letters that he would write to himself, an exercise suggested by his therapist.

However, when he gets to school, Evan runs into Connor Murphy, Zoe’s troubled brother. Connor yells at him due to a misunderstanding and then later appears to have a change of heart, even signing Evan’s cast. When Connor finds one of Evan’s letters, he believes Evan is making fun of him and leaves school. A few days later Evan finds out that Connor died by suicide.

Through another series of misunderstandings, Connor’s parents think Evan and Connor were good friends, thus helping them through the grieving process. However, Evan’s lies continue to grow and although they start off well-meaning, eventually they snowball and hurt a lot of people.

What is Dear Evan Hansen Rated?

The Dear Evan Hansen movie is rated PG-13 for thematic material involving suicide, brief strong language and some suggestive references according to the MPA. Is Dear Evan Hansen kid friendly? Yes, for older kids the movie is more so than the musical. Parents need to know that there are some tough topics for teens and kids in Dear Evan Hansen, but the language is toned down a lot from the stage production.

Suicide, grief, social media use, drugs (prescription and recreational), and mental health are all at the forefront of Dear Evan Hansen. Parents, please don’t let your kids watch this and then not talk to them about what they saw and felt. Better yet, watch it with them or at least watch it on your own.

There are also some sexual jokes about Evan and Connor being gay and that the letters were a “sex thing.” In one scene a character sings about having a boner and then rubs his nipples. 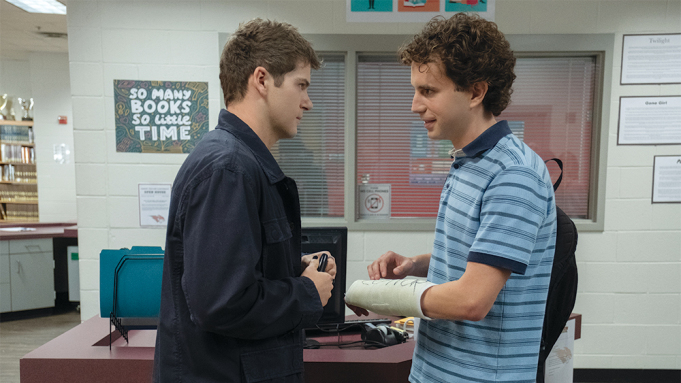 Is Dear Evan Hansen Appropriate for Kids Under 13?

When I saw Dear Evan Hansen on stage a couple of times, I would not have recommended it for kids. There are a lot more sexual jokes and the language was harsher, including many uses of f*ck, which made some tweens uncomfortable.

The subject material is not for all kids or teens either. Dear Evan Hansen movie is very emotional, and I was ugly crying, but “You Will Be Found” often does that for me. Perhaps if you hate the subject material, then it won’t move you at all.

Much of the criticism for Dear Evan Hansen comes from the lack of consequences Evan receives for his deceit, allowing his lies to spiral out of control and even reaping some benefits. There’s also another point of exploiting someone’s pain and grief into a gross glorification. Both valid points.

But what consequences does everyone want for a high school boy, perhaps autistic, obviously suffering through mental health issues of his own? This is where Amy Adams does an excellent job of portraying Connor’s mother – desperate from her grief, but also empathetic enough to not want to to hurt another child.

Where Dear Evan Hansen fails is the casting of Ben Platt. He’s too old to play this character and the camera closeups revealed the heavy makeup that made him seem even more fake. Maybe they thought if they gave him Napoleon Dynamite hair, that would make him look younger? Nope. They should have just let him be. 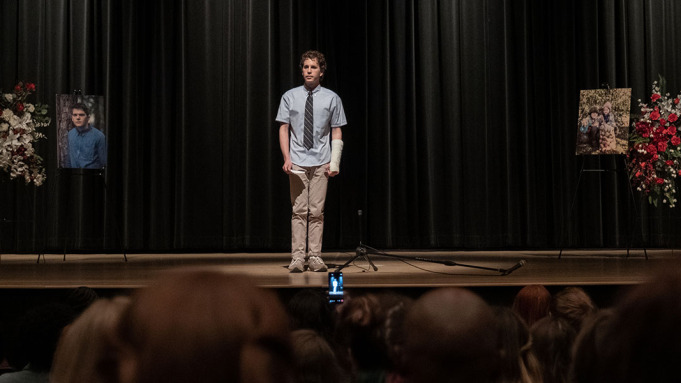 However, he does have a connection with fans and the Dear Evan Hansen community. For those musical fans who never got their chance to see Platt as Evan, now’s their chance. And he has some chops. I get goosebumps every time I listen to sing. However, some of his mannerisms were a little over the top, and didn’t help the age argument, but I forgave him. His voice is just too good.

The soundtrack has always been a favorite, and the new songs are a welcome change. Wow, Amandla Stenberg in “The Anonymous Ones” is incredible. While the plot mainly stays true to the musical, I enjoyed some the additions and softer characters like Jared isn’t quite the turd he was in the play.

It’s hard for me not to insert my observations as a mother in this review – that’s why the musical and the movie hit hard. What kids and teens go through these days is sometimes heart-wrenching to witness. Bullying, isolation, social media, likes, anxiety, etc. That’s not to say that all kids going through these things make horrible decisions like Evan. But I can see how it could happen. Depression and desperation make you believe things that aren’t as they seem sometimes.

I don’t think Evan went unscathed from his choices. And the scenes different in the movie help make some sort of amends. The powerful messages through music were not hollow to me or to my own daughters. Others may feel differently, but I think teens deserve the chance to see this beautiful movie, imperfections and all. Dear Evan Hansen makes me want to be a kinder person. What’s wrong with that?

[…] from Dear Evan Hansen? Drop them in the comments below. Wondering if the film is kid friendly? This Dear Evan Hansen Parents Guide will tell parents what they need to […]