Some of the best Downton Abbey movie quotes come from interactions between the Dowager and Isobel Crawley. They are friendship goals.

Did I miss any of your favorite Violet Crawley quotes? Drop them in the comments below.

On the King and Queen coming for a visit…

Dowager Countess: Will you have enough cliches to get through the visit?
Isobel Crawley: If not, I’ll come to you.

Isobel: I see a Machiavellian look in your eye.
Dowager: Machiavelli is frequently underrated. He had many qualities.

Mr. Carson: I went where I felt like I could do the most good.
Dowager: (while giving Isobel the side eye): Wise words for all of us.

Dowager: “Thank you. That was helpful.”
Isobel: “I told you I wanted to help.”
Dowager: “Thanks to you we have her cornered.”
<Isobel looks in horror>

On Having a Sharp Tongue

Dowager: “Sarcasm is the lowest form of wit.”

Dowager: “What simpletons men are.”

On Just Being the Dowager We Love

King of England: “Were you effected by the strikes?”
Dowager: “My maid was rather curt with me. She’s a communist at heart.”

Dowager: “Dislike it? I will lick the stamps myself.”

Isobel: “Oh Violet. After all these years you still astonish me.”
Dowager: “Oh good, I’m glad I’m a revelation and not a disappointment.

Thank you to Maggie Smith for being such a gem. Without her we would never have these hilarious Dowager Downton Abbey movie quotes!  Here is my ‘Is Downton Abbey kid friendly‘ movie review if you’re thinking about taking the kiddos. 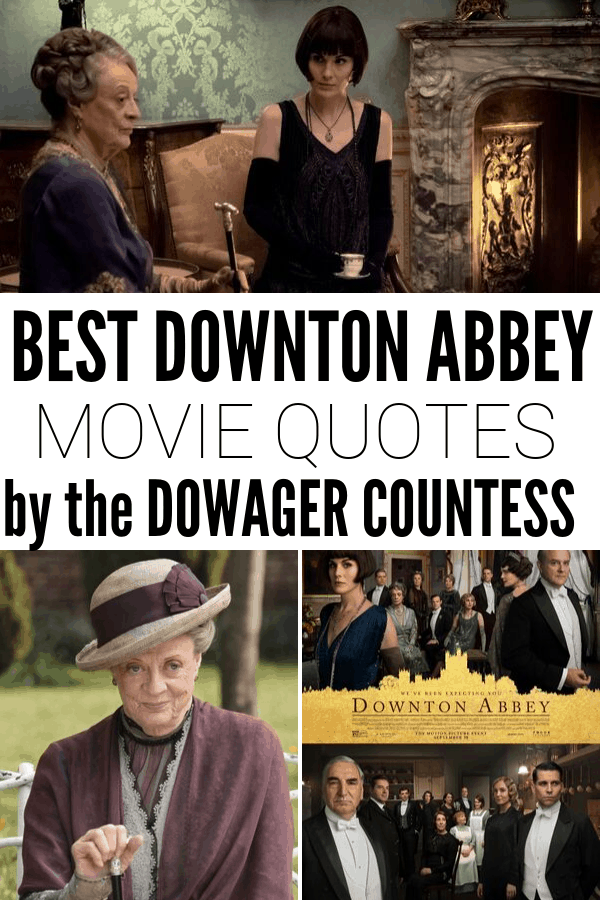 “I feel as though I have been transported to another world!”

What is the line Maggie Smith uses when she says … If you live long enough you’ll feel as if you came from another planet? Something like that

[…] you can’t help but wait for Lady Whistledown’s gossip. She sometimes reminds me of Dowager Grantham from Downton Abbey. Did I miss any of your favorite Bridgerton quotes? Drop them in the comments […]

[…] after the events in the series finale.  Most of the regular characters are back, including the Dowager Countess of Grantham (played by Maggie Smith).  I don’t want to spoil the Downton Abbey Movie for those who […]