When I found out that Emma Watson and Dan Stevens were on our list to interview at the #BeOurGuestEvent, I was in heaven. I’ve loved both of them in different roles they’ve played. It’s difficult to keep it professional when inside the inner fangirl in you is screaming to ask all the questions you want to ask like, “But whhhyyyyy did you leave Downtown Abbey?” or “Hermione, can you just say a quick spell for me?” But I kept it together, rocked my jumper, and sat with a permagrin as I listened to them speak about everything Beauty and the Beast. Take a look at our exclusive interview with Emma Watson and Dan Stevens!

I was pretty pumped that it was our group of bloggers and Emma Watson and Dan Stevens in one room – together! When they entered the room, we started to clap and cheer. They were so cute, gracious, and excited! It was fun to see their interaction and take note of the amount of respect they have for one another. You could tell they were genuine friends. 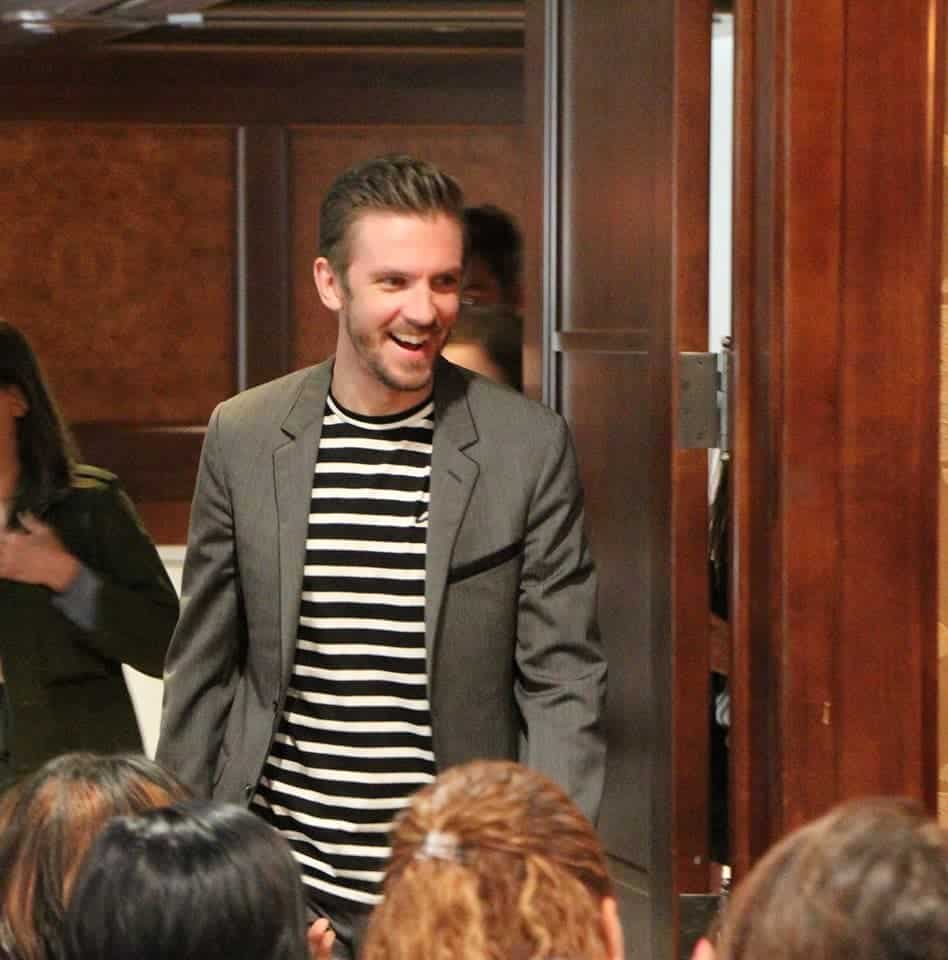 Let’s start there, shall we? This was part of the last question asked in the interview, but really, it was the greatest takeaway for me. As a woman, mother of 5, wife, daughter, friend, adventurer, I admire so many qualities in Belle. That’s why we love her so much. That’s why people are excited to see this film. Listening to both Emma Watson and Dan Stevens talk about their roles and the movie, they take it seriously, too. They know what’s at stake for the fans.

The Importance of Belle

What is important for both of you, for girls and boys, to take away from this movie?

Dan: “I actually have a great friend of mine who’s now in his mid-thirties. He grew up in the west of England in the countryside, who for him, Belle was his greatest hero, and he used to go into the fields of Somerset and sing. There’s something about the spirit of Belle that is to be championed in, in all of us. I think that curiosity, that imagination, that ability to see beneath the surface deep, but also to see beyond your immediate surroundings. And she has tremendous vision in all ways, and I think that’s something to be applauded.”

Emma: “I think as a child, I had a very hard time working out sometimes to why people weren’t kind to other people, and trying to kind of understand. I think what is so beautiful about Belle is that she’s so nonjudgmental. It’s her ability to see beyond the surface of things to understand that everyone has a story, and you don’t always know what that story is, and to look deeper into things before you make a judgement. And, so there’s a kind of compassion and empathy there which I think is kind of a relief because I don’t think anyone is inherently evil. I think there’s light and dark in everyone, and I think that she kind symbolizes that very well.”

The Importance of Emma Watson

Everyone that we interviewed from the cast had nothing but wonderful words about Emma Watson. They spoke about how talented and kind she is, and most importantly that she’s a good role model. And she really is. This is someone who I would absolutely want my five daughters to look up to. From her advice to her input in the movie and Belle’s character, Emma Watson is a gem.

What would you say to girls that feel different and odd in their own way?

Emma: What I remember being so torturous about school was that [school] is your whole world. It’s like this microcosm; the people that are in your class, that’s your entire universe. That is your planet, and if you don’t fit with that, with those, however, many people are in your class, it’s miserable.

And I think what my mom really said to me was that it might feel like the end of the world right now, that you don’t quite fit, but one day, you might be really grateful for that. It’s very hard to see at the time but there’s a big, wide world out there with people who have diverse interests, perspectives, and opinions. And you kind of have to just like go out there and, find your tribe; find your kindred spirits; find the people that resonate with you and that you feel at home with.

I literally gasped at the ballroom scene, it was so beautiful. Belle’s dress is to-die-for. So how much input did Emma Watson get and how did the dress come about?

Emma: “I was very heavily involved in the dress. Trying to get the dress right was really difficult because we needed to dress her to serve a number of different purposes and functions. So it needed to be of the period, so originally we had started off with a seventeenth century traditional dress, but then realized that it didn’t do the really cute twirly thing that it does in the animation… We were like, okay, back to the drawing board. It’s gotta twirl.”

“So it also needs to feel like an action hero dress which is why the front of the dress looks a bit like a coat of armor. It’s got gold flecks in it, and it kind of had that warrior element to it, as well. So, yeah, we kind of created a warrior, modern seventeenth century twisty, twirly dress hybrid.”

Dan: “There was a  lot of chewing and throwing with that dress design, and during that extensive design period, Emma came over to my house in London for dinner. We were talking about what the dress was gonna look like, and my five-year-old daughter at the time sort of overheard our conversation. She scurried into the next room with a pen and paper and came back about a half an hour later with five different dress designs. Emma was very sweet and sat down with Willow and looked through them all. and they chose which one they thought they should go with. A few weeks later Willow came on set and saw Emma in the finished dress, and says “Yep, that’s the one.”  So in her mind, she designed that dress.”

The dress is legit, y’all.

When I first saw previews for Beauty and the Beast, I wondered how they were able to humanize the beast so much. It’s actually one of my favorite things about him.

Dan: “I didn’t really have a costume.  Well, I did have a costume.  They made costumes for the Beast.  They were really giant coats that he wore and this massive shredded cloak, but I never actually got to put it on. I spent the whole time, as the Beast, anyway, in a forty pound muscle suit on stilts covered in gray lycra.  So I looked pretty odd, but nothing like the Beast that you see in the movie.

It was motion capture puppeteering of the suit.  I’m inside a giant muscle suit on stilts, so the Beast’s body was, was me moving inside there.  The facial capture was done separately, and every two weeks, we’d go- I’d go into this booth, and ten thousand UV dots would be sprayed on my face, and twenty-seven little cameras would capture everything I’ve been doing for the past two weeks just with my face.  So it was my face driving that Beast’s face and, and they turned that information digitally into the Beast’s face and map it onto the body that I’d been working on the set. It’s an amazing new technology that’s never been used this extensively before. Lots of CGI [but], it is me driving it all. It’s very, very exciting. “

AMAZING! I was in awe the entire film, because seriously, how do you turn that face into the Beast?

You get some extra back story about the Prince in Beauty and the Beast – also epic dance scenes. I’m not talking hip hop here, but breathtakingly beautiful dance scenes like the waltz. We asked how long it took them to train for those scenes.

Dan: Wow, it was about three-month training for that. It was a lot of dance training for this, and particularly for that iconic waltz, and we first of all learned it on the ground.

Dan: [We] first of all learned it on the ground. With different partners.

Emma: We learned it together.

Dan: Then I graduated to the stilts.

Emma: And then he graduated to the ballroom because that ballroom is so huge that actually filling the space and really making it seem as if we were filling that room was a kind of challenge in itself.

Dan: It’s quite a process. Waltzing on stilts. Not something I thought I would ever be able to say.

Yup, they nailed it.

My review of the film, along with interviews with Luke Evans, Josh Gad, Audra McDonald, Gugu Mbatha-Raw, Bill Condon, and Alan Menken are coming up this week, too! I already have my tickets to see it with my family when Beauty and the Beast opens in theaters, Friday, March 17! A big thank you to Emma Watson and Dan Stevens for their time and for being so delightful!

Visit the official BEAUTY AND THE BEAST website here: http://movies.disney.com/beauty-and-the-beast-2017

Thank you, Disney, for inviting me to interview the cast of Beauty and the Beast and providing transportation and accommodations. All opinions of my Emma Watson and Dan Stevens fangirling are my own.

← Previous
Tangled Before Ever After Review - Rapunzel is Back! #TangledTheSeries

Next →
Hermione Belle Running Costume for Princess Half Marathon - Beauty and the Beast/Harry Potter Mashup
Click here to cancel reply.