Thank you, Disney, for hosting me for the Ralph Breaks The Internet Event. All opinions on my lack of celebrity selfie skills are my own.

I’m sure you’ve heard by know just how epic the Princess scene is in Ralph Breaks the Internet. If you haven’t, let me tell you, it’s everything!! So to see many of the actresses who voice these Disney Princesses on the blue carpet and at the after party was incredible!

Many of us bloggers even Disney Bounded as Disney Princesses for the carpet. We were lucky enough to see Pamela Ribon, who we interviewed earlier that day, and she snapped a photo with us. Pamela wrote the Princess scene, and I can’t wait for you to read about our interview with her. Spoiler alert: I cried. Yeah yeah, not a big surprise.

Here’s the good, bad, and the ugly from the blue carpet.

My Jasmine Bounding. I loved how it all came together, and thanks to my friend, Emille, for sending me that awesome cuff and earrings! It takes a village, people.

This was an Amazon purchase, so you can find my Jasmine dress here (affiliate link). This was the first time I’ve tried KOH KOH dresses, and they are very flattering. They run big, so I recommend ordering a size down if you’re buying a flowy gown. I took off the broach type thing they had on the front and added this gold belt (affiliate link). The belt is stretchy and was very comfortable.

Seeing random celebrities is always a fun treat! With Disney movies you can often find Disney Channel stars or other celebrities with children. My faves were tWitch and his wife Allison. I loved watching both of them on So You Think You Can Dance.

And of course, there are the celebrities from the movie and my favorite show, This is Us. I adore Mandy Moore!

And then there’s that unexpected Jack McBrayer moment. My fabulous The Geekly Show co-hosts and I were waiting to take a picture at a photo op at the end of the carpet. As we’re walking on stage, I hear,”He’s going to get in the picture.” I was wondering who ‘he’ was.

As I turn around I’m face to face with Jack McBrayer (voice of Fix-It Felix). My face must have dropped from shock. He had the biggest Kenneth 30 Rock smile on his face, complimented all of us, and was just the nicest guy ever.

If you notice Amanda’s and Tessa’s hands in the photo, it’s because Tessa thought we were doing a pose, and Amanda was swatting her hand away, because she was blocking Amiyrah. Typical The Geekly Show shenanigans. I didn’t even notice until someone commented on the photo and Amanda shared the story. We were dying laughing. Maybe I should add that to the ugly section 😉

With every magical moment, there’s always the behind the scenes shot of how it gets done. Red carpets are definitely fun, but they’re also fast and furious. This one felt extra crowded, and as you’re trying to get your money shot on the carpet, you have crowd control telling you to move it along.

Um, me trying to make Ralph’s face. Not cute. 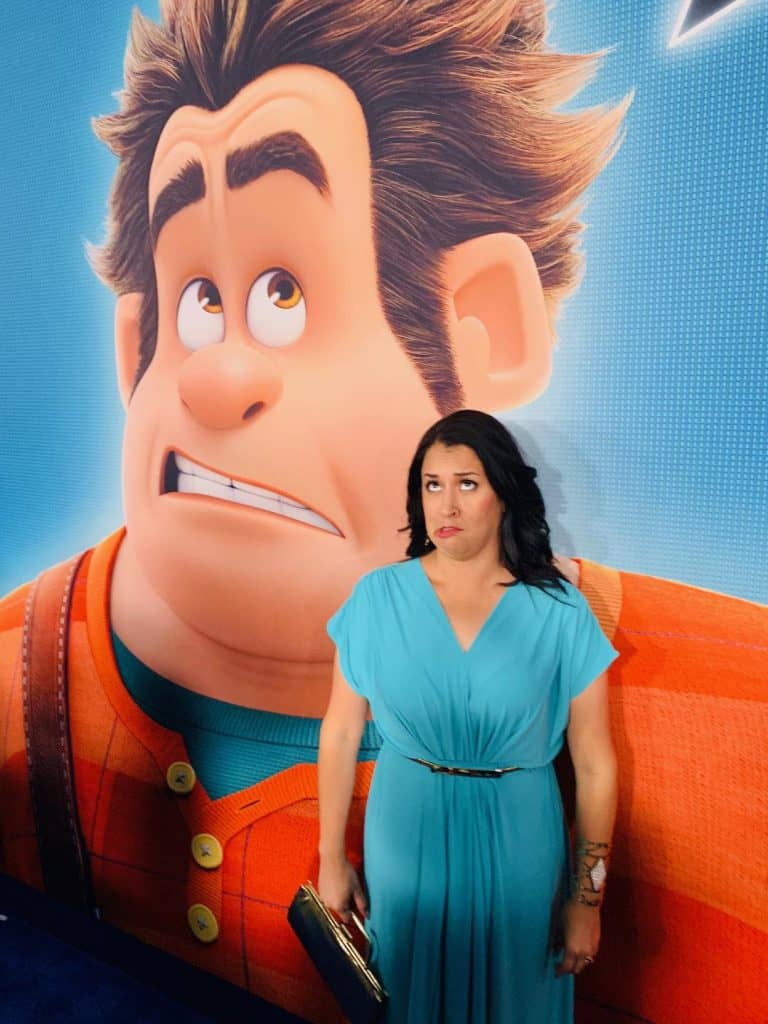 Ralph Breaks The Internet After Party

Honestly, my favorite room was Tappers. That’s where Vanellope and Ralph hang out in the movie and it’s a game from Wreck-It Ralph. Inside you could get root beer floats, and the room next door had a Sugar Rush game.

Yes, I had 2 root beer floats and had the bartender slide the root beer to me. Don’t judge. I enjoy a good theme.

In the main room is where all the celebrities hung out. You know me; I hate to ask for pictures unless it’s an emergency. Well Ming-Na Wen was one such occasion. She’s the voice of Mulan and Agent May in Agents of S.H.I.E.L.D. I couldn’t pass on my Marvel love. She’s flawless. 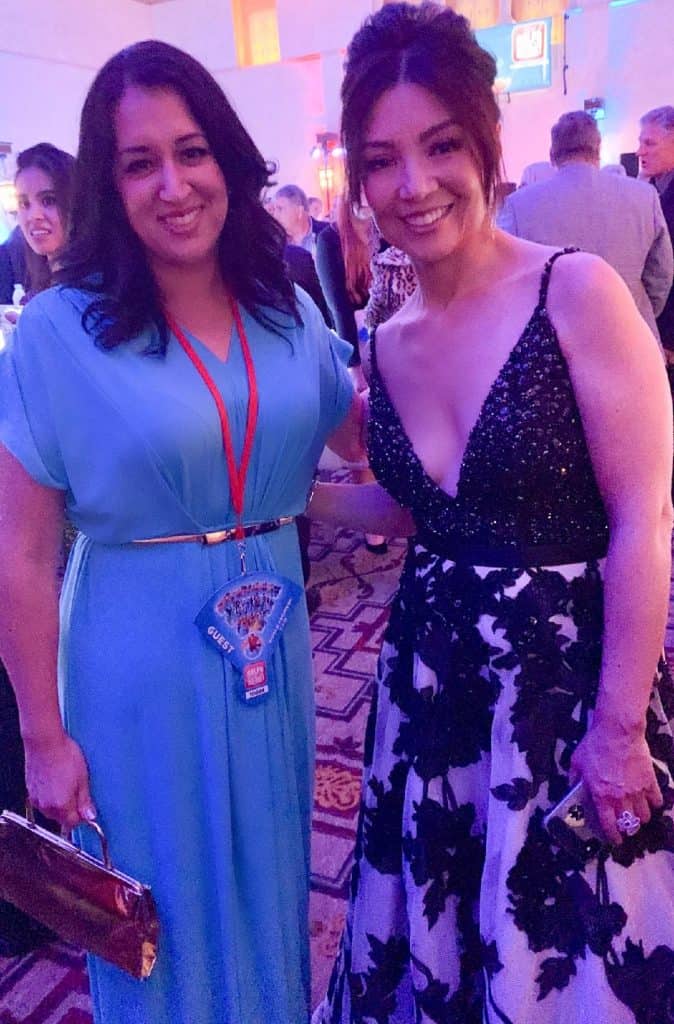 Then there was Jon Hamm. I admired from afar, because the man is just way too cool. Though I did start to hum the Mad Men theme song as I walked by.

The after party was such a good time! My feet were killing me, I was exhausted, on an emotional high from such a wonderful night, and I could feel myself crashing.

However, a girl does not miss a chance for a character photo op. So one last pic from the real stars of Ralph Breaks the Internet Premiere – Wreck-It Ralph and Princess Vanellope von Schweetz. 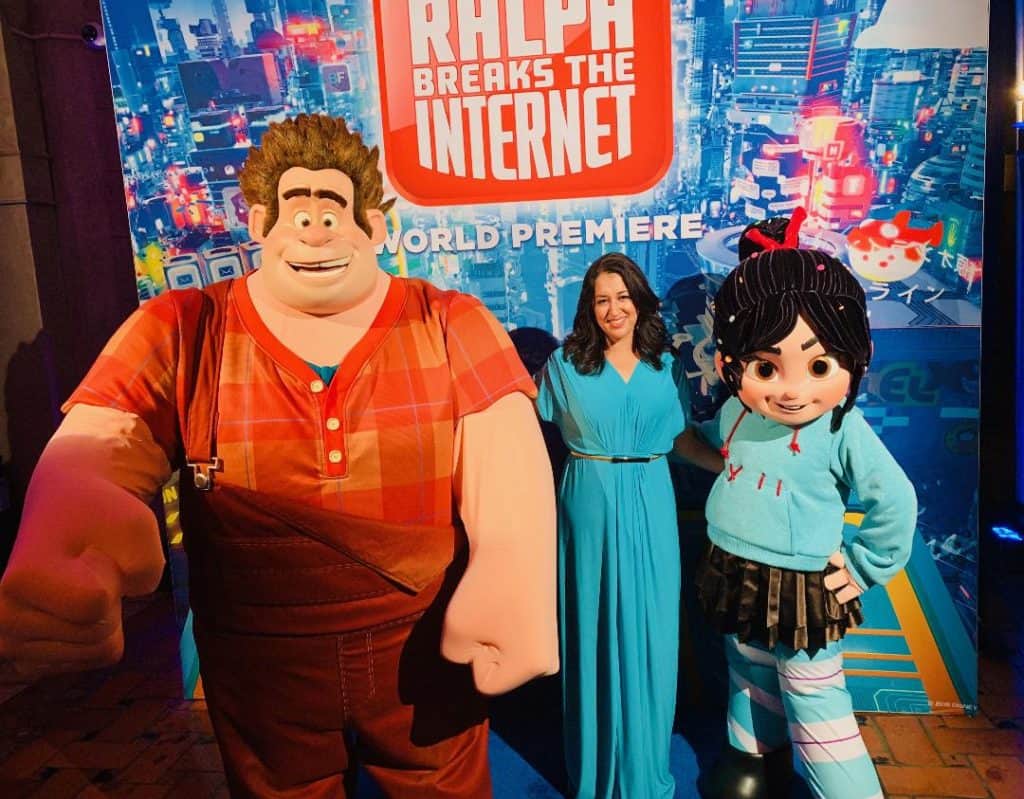 We partied like it was 1999 at the Ralph Breaks the Internet Premiere, and then it was time for bed. Magical dreams.

Ralph Breaks the Internet is in theaters November 21st!!!

How Did THAT Princess Scene Make It in Ralph Breaks the Internet? | A Pamela Ribon Interview
Categories: Entertainment

The Void VR | Is Ralph Breaks VR Worth It?
Categories: Entertainment