Wondering if Love and Monsters is ok for kids? Rated PG-13 for violence and language, this post-apocalyptic suspense movie is not kid friendly. Here’s what parents need to know in this Love and Monsters Parents Guide. 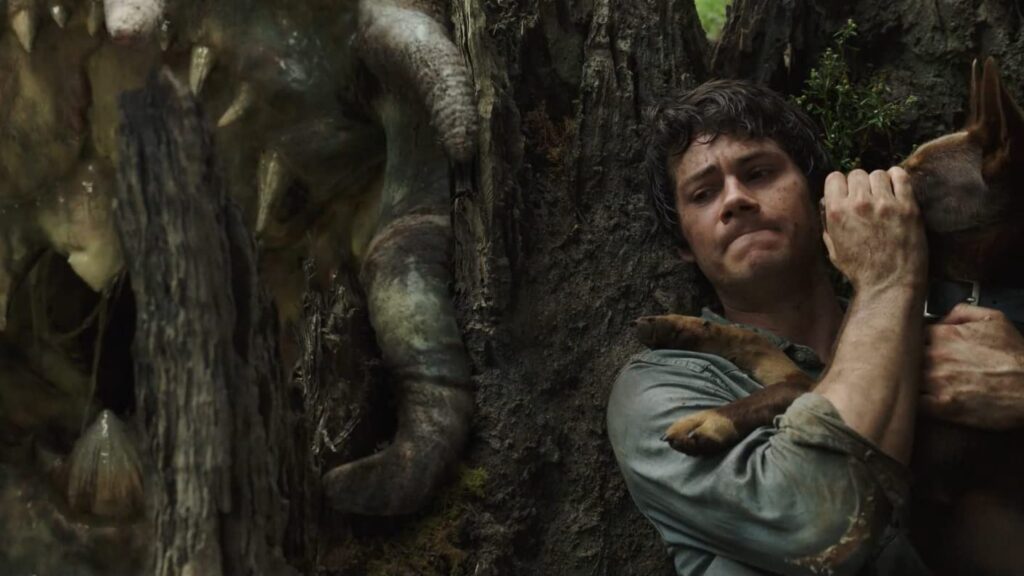 Is Love and Monsters Kid Friendly?

Seven years after the Monsterpocalypse, Joel Dawson (Dylan O’Brien), along with the rest of humanity, has been living underground ever since giant creatures took control of the land. After reconnecting over the radio with his high school girlfriend, Aimee (Jessica Henwick), who is now 80 miles away at a coastal colony, Joel has feelings for her again. Joel is willing to risk his safety to find Aimee on the surface, despite all the human-killing monsters that stand in his way.

Is Love and Monsters appropriate for kids under 13? The PG-13 rating is pretty accurate, and some younger kids could be fine if they’re not sensitive to monster and bug guts. Here’s what parents need to know before letting kids watch Love and Monsters.

There is some strong language including sh–, a–, and damn.

There is a lot of use of weapons in Love and Monsters. These are mostly to defend themselves from the monsters. While there is too much violence for young children, teens and older kids may be amused by some of it, including the bug guts spraying everywhere with blood and slimy parts. It’s more gross than gruesome. Some scenes may make kids jump, and there are fight scenes.

Some sexual content to be aware of is when underground, Joel shares a bunker with couples who have partnered up, and he can hear noises and see silhouettes/shadows of them, but there is no nudity. There are also some kissing scenes.

If you go in not expecting anything from Love and Monsters, you’ll be pleasantly surprised. An action/romance/adventure/ comedy, there are still some heavy topics for kids, so I’d stick with the teen crowd for this one.

Dylan O’Brien does an excellent job of carrying the film with the additions of some other charming characters  – Minnow (Ariana Greenblatt) and Clyde (Michael Rooker). They add some spunk and comedy as they help Joel survive on his quest to find Aimee.

While maybe not family-friendly for all, Love and Monsters is not a bad flick to add to the Video On-Demand list.

← Previous
A Babysitters Guide to Monster Hunting Parents Guide | Is it Kid Friendly?

Next →
Most Quotable A Babysitter's Guide to Monster Hunting Quotes
Click here to cancel reply.