The second my kids saw the trailer for Teen Titans Go! To the Movies, they asked if I would take them. Admittedly as a parent, I’m not the Teen Titans’ biggest fan, because the show can be a little crude. Is the Teen Titans Go movie kid friendly? I was really surprised. 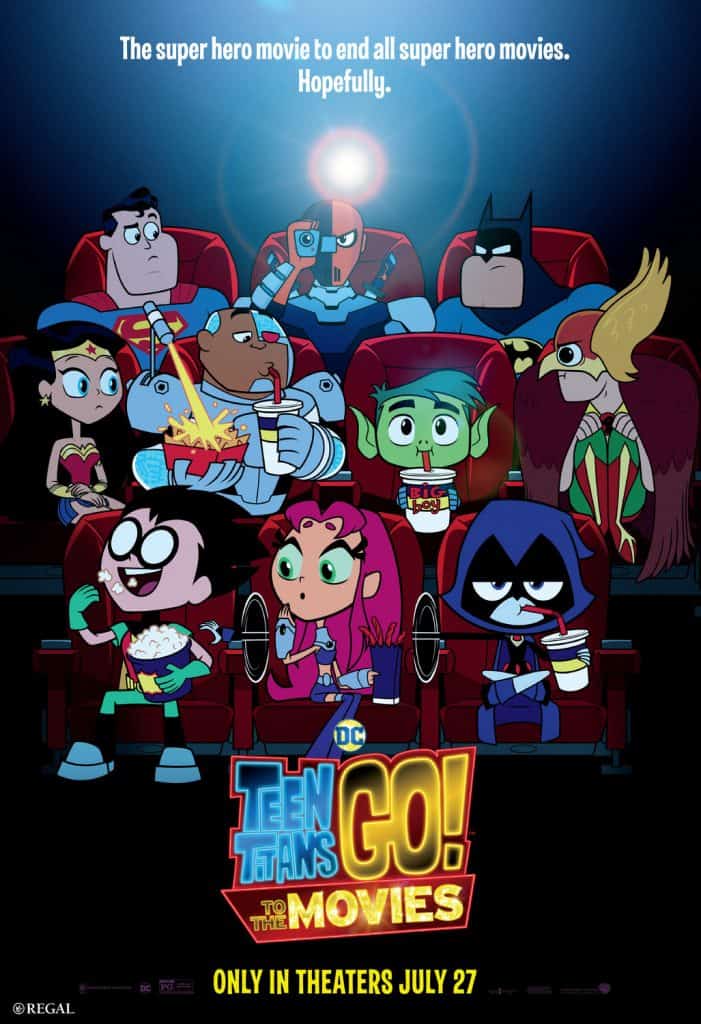 As usual, I offer the information on language, nudity, sexual content, and violence, and it’s up to parents to decide on what’s best for their children.

What Parents Need to Know about Teen Titans Go! To the Movies

Teen Titans Go! To the Movies is rated PG for action and rude humor. And yes, there is rude humor AKA potty jokes, but no jokes that I felt crossed the line.

You all know I try to count to every profane word in a movie including the use of God. So here’s where I was shocked about Teens Titans Go! To the Movies.  I did not count one single word. For this reason alone, I wish major success to this film.

There was one ‘oh my gosh,’ which they could have easily thrown in another word, and they didn’t. This is a perfect example where a kids’ movie can still add in humor for adults without adding profanity. I give mad props to Warner Bros.

There were a few words like stupid, jerk, butt and poop that were sprinkled in through the movie, so if your little ones like to repeat things, then just be aware of that.

Teen Titans Go! To the Movies likes naked animated butts. There were a few that graced the presence of the screen, one which was a baby. It got laughs from the crowd. There was no kissing or other romantic gestures.

Robin does advise kids to ask their parents where babies come from at the end of the film, so just a heads up that question will be coming. My 7-year-old daughter thought it was hilarious to repeatedly ask me that over and over…and over.

This is a super hero film, so there is some fighting, use of animated guns, blasters, and swords, and even heroes fighting heroes. There is definitely action, but I found the violence to be mild and less violent than in Incredibles 2.

What Kids Will Like About Teen Titans Go! To the Movies

If your kids are a fan of Teen Titans Go!, then they’ll enjoy the movie. Teen Titans Go! To the Movies is filled with witty, irreverent humor that was even making the teens next to me laugh. It’s silly, ridiculous, and predictable.

Kids will see their favorite superheroes on the big screen, too. I was feeling nostalgic with the appearances of Batman, Superman, Wonder Woman, Aquaman, etc., and I’m not even a DC Comics fan. They were trolling and throwing some shade at Marvel in the jokes, and even I couldn’t help but laugh.

My girls also loved seeing the Teens Titans! Beast Boy, Raven, Robin, Starfire, and Cyborg are all up to their usual tricks.

Is Teen Titans Go Movie Appropriate for Kids Under 8?

I think Teen Titans Go! to the Movies is appropriate for kids ages 8 and up. I would let my kids 5 and up watch it, too. The only questionable material is some of the humor. If you’re fine with potty humor, then you have nothing to worry about.

There are a lot of fart jokes which my girls found hilarious. Plus the music kept my kids entertained and was my 9-year-old’s favorite part. It almost felt part musical.

The length of the movie is great, too, for little ones. At 1 1/2 hours, it’s just about the time when kids run out of snacks and start to get antsy.

What Parents Will Like About Teen Titans Go! To the Movies

Adults and older teens will pick up on more of the subtle jokes and nods to the older crowd. With references and songs from the 80’s, and the use of words like sick and dope, I found myself smiling a lot more than I thought I would.

So is the Teen Titans Go Movie kid friendly? Yes! Teen Titans Go! To the Movies is a fantastic family film that relishes on satire and not taking ourselves so seriously. It’s immature and sometimes we need more of that.

And with a message like, “You don’t need to be super to be a super hero; You just need to be yourself,” you’ve basically earned your parenting award.

Teen Titans Go! To the Movies is in theaters now!

When the Teen Titans go to the big screen, they go big!  “Teen Titans GO! to the Movies” finds our egocentric, wildly satirical Super Heroes in their first feature film extravaganza—a fresh, gleefully clever, kid-appropriately crass and tongue-in-cheek play on the superhero genre, complete with musical numbers. It seems to the Teens that all the major superheroes out there are starring in their own movies—everyone but the Teen Titans, that is!

But de facto leader Robin is determined to remedy the situation, and be seen as a star instead of a sidekick.  If only they could get the hottest Hollywood film director to notice them.  With a few madcap ideas and a song in their heart, the Teen Titans head to Tinsel Town, certain to pull off their dream.  But when the group is radically misdirected by a seriously Super-Villain and his maniacal plan to take over the Earth, things really go awry.  The team finds their friendship and their fighting spirit failing, putting the very fate of the Teen Titans themselves on the line!