Wondering if the Dune  movie (2021) is ok for kids? Dune is rated PG-13 for some language and violence. The 2021 version of Dune is better than the David Lynch version, but since it is split into two films, this one sets up the story for the next and is painfully long. However, young fans of Timothée Chalamet and Zendaya will want to watch this on the big screen. Is Dune kid friendly? Mostly yes, but it gets violent. Here’s what parents need to know in this Dune Parents Guide.

Frank Herbert’s novel, Dune, is complex, has many layers and worlds and is said to have influenced Star Wars, which is apparent. This is tough to translate to the big screen, but Denis Villeneuve does a fairly good job, especially if you’re familiar with the source material. However, if this is your first introduction to Dune, you may be scratching your head by the end.

A lot of time is spent introducing you to the characters and players in this political drama. Dune is set in the year 10191 and the Emperor of the Known Universe has decreed that House Atreides should oversee the ongoing colonization of the desert planet of Arrakis, basically forcing them to leave their home, because there is “no call they do not answer.”

Oscar Issac is Duke Leto Atreides and shares a son with his concubine, Lady Jessica (Rebecca Ferguson). She is also part of the religious order the Bene Gesserit, who have powers you don’t want to underestimate. Paul (Chalamet) is their son and is struggling with his duty to his father and title but also of his so-called Messiah calling from the Bene Gesserit. He has also been having nightmares and premonitions of what’s to come on Arrakis, including of one particular girl, part of the Freman, the desert people living there who are not happy to have visitors.

Dune is rated PG-13 for sequences of strong violence, some disturbing images and suggestive material which means this film may not be suitable for children under 13.

There is less language than your typical Marvel movie, but there is some profanity in Dune including a few uses of sh*t, hell, a**, and damn. There are also uses of Deity like “oh g-d.”

Dune is quite violent and some scenes are scary, but gore is kept to a minimum. There are battle and war scenes where many soldiers die, and there are weapons and hand-to-hand combat. People are shot, burned, and stabbed. One scene is difficult to watch as a character is put through a test and in a lot of pain. You see a close up of a bloody hand and bloody knife.

There is a “voice” that is super creepy. A character is naked and drugged in a chair in distress, a table is strategically placed to cover full nudity. A male character is seen shirtless. Two characters almost kiss.

Death of family and friends may be hard for some kids to watch.

Is Dune Appropriate for Kids Under 13?

PG-13 is an appropriate rating for Dune. If your kids are sensitive to war and death, then this may not be the film for them. However, if they love sci-fi, then add this to their list. Dune is just gloomy. There is some humor sprinkled in to help lighten the mood, but overall, it’s pretty depressing and not necessarily a pick-me-up.

Is Dune too scary for kids? It is too intense for little ones. And the length of the movie could be an issue for them. Yes, there are intense and frightening scenes, but nothing the 12+ older crowd couldn’t handle if they’ve seen films in the same genre.

The visuals are stunning, and mixed with the soundtrack, Dune is simply beautiful. However, without this cast, I would have been asleep about 30 minutes into the film, and even with the incredible acting, I looked at my watch quite a bit.

Chalamet was excellent as a brooding Paul, yet brought childlike emotions into his character, making him likeable. Conflicted between his responsibilities and loyalty to father and mother, he seems human and relatable. Ferguson plays a conflicted mother who would do anything to save her son, yet also has duties to the Bene Gesserit. And those women are brutal.

Then there’s Isaac as Duke Leto who knows something is shady with the Emperor, yet he’s loyal and duty calls. Stellan Skarsgård as Baron Harkonnen is a creepy Jabba the Hutt dude in human form. Star Wars similarities are abundant throughout Dune.

I’m not an invested Dune fan. However, if I was, I would be hyping this film all over the place.

While I’m grateful the story wasn’t rushed, it was still too dang long for part one. The imagery is breathtaking, but that can only sustain you for so long. After 2 1/2 hours, I thought to myself, what happened? Did anything happen? This is definitely a build-up to part 2. But will it be enough to get non-fans on board for part two? The jury’s still out. Perhaps I lack the sophistication to appreciate Dune for what it really offers. I wasn’t quite satisfied, but I’d still watch part two. Because seriously, I want something to happen. 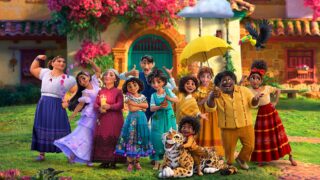