The Stories Behind the Dogs in Lady and The Tramp

Those aren’t CGI dogs starring in Lady and the Tramp on Disney+. We heard many of their stories coming from all different backgrounds from Head Animal Trainer, Mark Forbes. I even tried to get all the dog training secrets from him, because my rescue pup could learn a few things. If you’re an animal lover, be prepared to fall in love with the dogs of Disney’s live-action Lady and the Tramp. 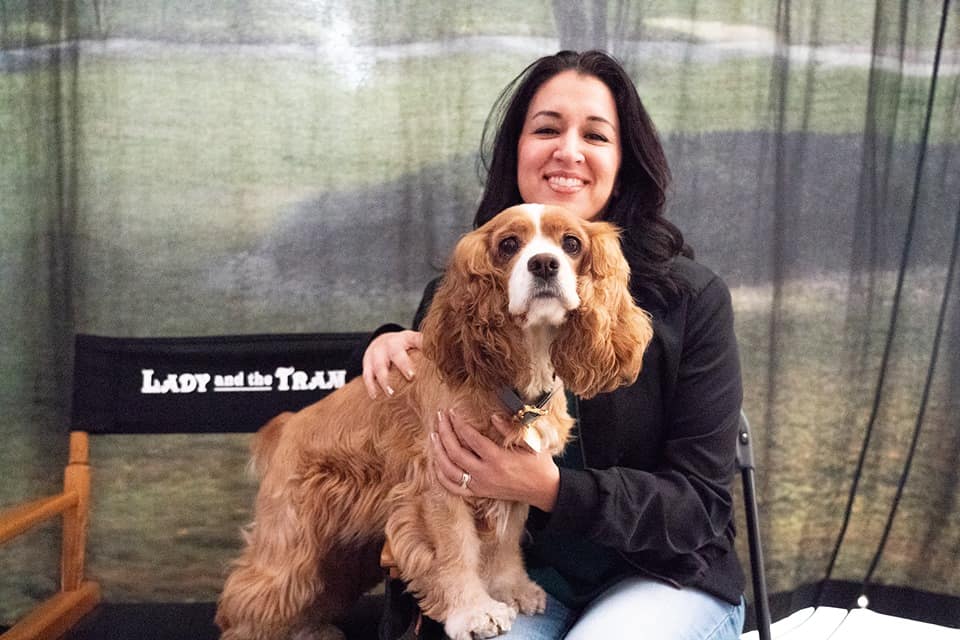 I’ve been a dog lover my whole life. I begged for a dog throughout my childhood and finally received one from a boyfriend in high school if you can believe that. I was surprised my parents let me keep him. Max was a Cocker Spaniel, similar to the picture of Rose (AKA Lady) above.

So I was in dog heaven we we visited the set of Lady and the Tramp in Savannah, GA.

Where Did They Get All the Dogs for Lady and the Tramp?

Mark Forbes is the most cool and confident animal trainer I’ve ever met. And yes, I have met others. He’s so natural with the dogs.

It was about a 2 1/2 month process to find and cast all the dogs in Lady and the Tramp. Mark said he thought seven or eight of them were complete strays, rescued. A few came from breeders, and a couple came from private homes who didn’t want them anymore.

They don’t put out an advertisement, but they do a lot of research online.

Mark Forbes: “It’s hard. I mean the great thing is almost every animal shelter, pound, rescue group in the country has the dogs that are in their system or website. You can go to pet finder or any of those and literally spend all day looking through pictures of dogs. It’s a little overwhelming. So you have to get as much information from the director and everybody else as to what they’re looking for.”

He also made it clear how he knew that it was a commitment to make the leap and rescue these dogs. “We’re still going to be on microchip. You know you’re committing to that dog being taken care of for the rest of his life.”

This made my heart melt. We have a rescue dog at home, and it’s huge commitment, one that we wouldn’t trade!

A Tale of 3 Tramps

Now Monty, the lead dog who plays Tramp,  was cast from a picture they found online. They showed it to Charlie Bean, the Director, and flew out to check his temperament.

Mark said, “He was great. We adopted him and here he is today. So we got him about 4 ½ months before we started shooting. We really don’t know what his life was before that.”

There are two other Tramps. Wendell was the first dog that they rescued. Wendell’s story was that he was in a gang in LA. Literally he was in a pack of dogs that was just roaming the streets. And sadly he killed another dog, and they caught the whole pack. They were going to destroy them, but Forbes and team convinced them to give him a chance, because he had experience training dogs that hung out with the wrong crowd. And they did!

Then there’s Shamus who also came from California.  Shamus, almost as soon as they got him started having some issues with his digestive system. He went through a lot, but two surgeries and $18,000 later, Shamus is happy and healthy. He may have been the lead Tramp (shhh, don’t tell Monty) if it hadn’t been for his health, but now they are all in the film!

So you can teach an old dog new tricks according to Mark Forbes. Positive reinforcement is the name of the game. According to Mark, “The great thing about dogs is after a while a pat on the head means just as much as a treat. Your approval means a lot. So we rely on that.”

Come watch and support these incredible dogs in Lady and the Tramp streaming November 12 on Disney+!

Next →
Why Did I Wear These Shoes? | Frozen 2 Red Premiere and Red Carpet Recap
Click here to cancel reply.