Members of Bad Batch-a unique squad of clones who vary genetically from their brothers in the Clone Army-each possess a singular exceptional skill that makes them extraordinarily effective soldiers and a formidable crew.

Each week with the release of a new episode, I’ll update this post. Did I miss any of your favorite Star Wars: The Bad Batch quotes? Drop them in the comments below.

Let’s blow something up, yeah! – Wrecker

Well Caleb, should we let them do what they do? – General
Only if I can go with them. -Caleb

Kid, you ready for this? We move fast. -Hunter
Good, that’s the only way I know. -Caleb

You are more machine than man, at least percentage wise. -Tech

I like you. You don’t fit in here either. -Omega

Strap in kid, you’re not gonna want to miss this view. -Hunter

You all appear to be genetically defective clones.

Maybe this Empire thing isn’t so bad after all. -Wrecker

The clones of Experimental unit 99 have a tendency to veer from standard combat protocol. 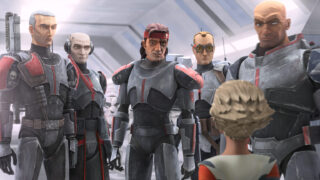 ← Previous
Star Wars: The Bad Batch is Life After The Clone Wars

Next →
Guide to Disney World With Toddlers During Covid
Click here to cancel reply.