Thank you, Disney, for inviting me and providing travel and accommodations. All opinions on my obsessions about Captain America are clearly my own. 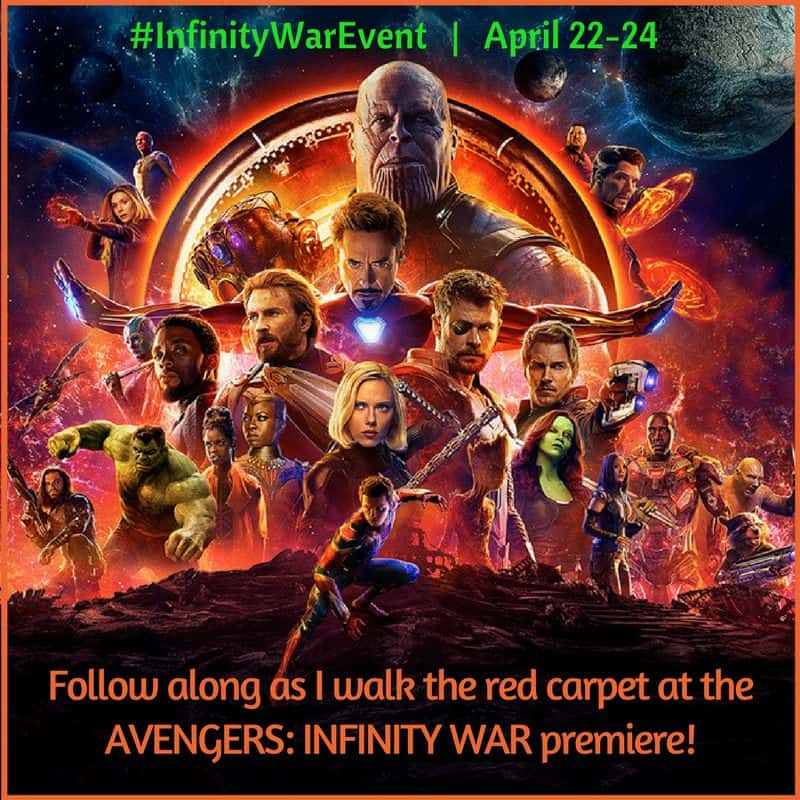 This really is a dream come true, and in fact, I put this event on my dream board two years ago. Most of the cast haven’t read the entire script, so it’ll be exciting to watch this film in the same room as them. I’m bringing all my tissues just in case, but I’m still optimistic for my Bearded Captain America.

This event has been ten years in the making, and I cannot wait to see the final product on the big screen. If you were walking the Infinity War Red Carpet, who would you be most excited to bump into?

Also during the trip, we will also be interviewing Victoria Alonso, Executive Vice President of Visual Effects and Post-Production of Marvel Studios. We will be chatting with her about her role at Marvel and the importance of STEM. So I’m thrilled about this for many reasons – she’s Latina, she’s a woman, and she’s been the co-producer or executive producer on all these Marvel movies in order you want to watch before Avengers: Infinity War. So she’s basically my girl crush.

Do you have any questions for Victoria Alonso?

We’ll also be visiting Disney’s Grand Central Creative Campus where we’ll get the scoop on the hottest Avengers: Infinity War toys and merchandise that I that you need. I would say I’m doing research for my kids, but who am I kidding? I’m totally buying them for myself. Ain’t no shame in my Infinity War toy game.

Quantico on ABC is back!

Have you heard the TV show Quantico is back on ABC? Marlee Matlin and Alan Powell join the cast as a new Black-Ops Team takes on explosive cases each week. We’ll get to screen the Season 3 premiere episode and have a Q&A with Marlee Matlin and showrunner/executive producer Michael Seitzman. I’ve admired Marlee for so many years, so I can’t wait!

It’s been three years since American hero Alex Parrish has had to navigate the dangerous waters of the Central Intelligence Agency and put her life on the line for her country. She has been living a peaceful, anonymous life somewhere in Italy. However, Alex is forced to abandon this idyllic existence when Ryan persuades her to help him rescue Shelby from a notorious international arms dealer known only as The Widow, who is holding her hostage – and in exchange for her release she demands something that only Alex can provide, when “Quantico” premieres for its third season, THURSDAY, APRIL 26 (10:00-11:00 p.m. EDT), on The ABC Television Network, streaming and on demand.

Oh yes, it’s almost time for Black Panther to come out on Blu-ray. May 15th, baby! On our #InfinityWarEvent trip, we’ll also get a look at the bonus features on the Black Panther DVD and have a Q&A with Executive Producer Nate Moore. Some of my favorite interviews are with producers; they have all the good stories.

Send me your questions about Black Panther! You can also check out my ‘Is Black Panther Kid Friendly‘ review. Watching it on a smaller screen will be better for the kiddos who are sensitive to violence.

Don’t forget (I mean, how could you forget) that Avengers: Infinity War is in theaters April 27th! Don’t be like those kids I had to school when I overheard them talking at the movie theater that it came out May 4th.