Wondering if Avatar is ok for kids? Since Avatar is being re-released in theaters and Avatar: The Way of Water is being released December 2022, many parents are asking whether Avatar is kid friendly. Here’s what parents need to know in this Parents Guide to Avatar.

On the lush alien world of Pandora live the Na’vi, beings who appear primitive but are highly evolved. Because the planet’s environment is poisonous, human/Na’vi hybrids, called Avatars, must link to human minds to allow for free movement on Pandora. Jake Sully (Sam Worthington), a paralyzed former Marine, becomes mobile again through one such Avatar and falls in love with a Na’vi woman (Zoe Saldana). As a bond with her grows, he is drawn into a battle for the survival of her world.

Avatar is rated PG-13 for intense battle sequences, warfare, sensuality, and language which means some content may not be suitable for kids under 13 years old.

There is quite a bit of language in Avatar. Words like sh*t, a**, damn, bi*ch, hell are heard. There are also words of Deity like g-ddamn said many times. And sexual words like balls, screw, and d*ck.

Violence: Is Avatar too Scary for Kids?

There are some violent scenes involving war and death in Avatar that may be too much for young kids. Avatar can get quite violent, especially the final battle scene. There are many emotional deaths which can be disturbing for young and empathetic viewers. Characters get shot, impaled, and stabbed. Many are crushed or wounded, and survivors depart crying and wailing. An animal is repeatedly stabbed.

There are some sexual jokes and references to sex and mating in Avatar. Characters kiss and spend the night together. There is no sexual nudity but you can see some behinds when loin cloths don’t cover all of the Na’vi. One character jokes “don’t play with that or you’ll go blind.”

Some characters smoke and drink alcohol.

Is Avatar Appropriate for Kids Under 13?

Avatar has a run time of 2 hours and 41 minutes, so most kids will not want to sit through the film.

In Avatar you can expect to see intense violent scenes, some sensuality, smoking and alcohol use, and profanity used by some of the characters. To sum it up, Avatar is not kid-friendly for kids under 10 years old.

Avatar is a beautiful film with stunning visuals, but it may not hold the interest of some kids and teens. It was a little too 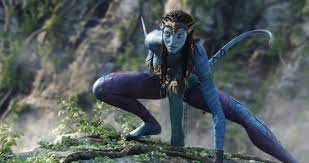