Wondering if Avatar: The Way of Water is ok for kids? And was Avatar 2 worth the 13-year wait? There’s no denying how beautiful the film is, but it certainly lacks in story. The originality of the first one seems to have been lost in the CGI. Here’s what parents need to know in this Avatar 2 Parents Guide.

Set more than a decade after the events of the first film when humans had been expelled from Pandora, Avatar: The Way of Water begins to tell the story of the Sully family – Jake, Neytiri, and their kids, Neteyam, Lo’ak, Tuk, and adopted daughter Kiri. That’s the problem though, it took them 3+ hours to begin to tell the story.

After a new threat from the Sky People, Jake Sully decides to leave their home in the forest, so that their people can be safe. The threat is Col. Miles Quaritch who has returned as an avatar with the memories of his human form. However, now he has the strength and size of a Na’vi and he’s out for revenge against Jake and won’t stop until he kills him.

Avatar 2 is mostly family friendly with some asterisks.

Avatar 2 The Way of Water is Rated PG-13 for partial nudity, intense action, and strong violence and language which means some content is not suitable for kids under 13.

There is quite a bit of language in Avatar 2 and some teens and marines with potty mouths. Profanity that can be heard includes at least 13 uses of sh*t, 6 uses of a**/a**hole, 5 uses of bi*ch, a few uses of damn, and one use of bastard and f*ck. There are also many uses of hell and words of Deity like Jesus and g-dammit.

Action: Is Avatar 2 Too Scary for Kids?

There are a lot of violent and intense battle scenes in Avatar 2 which may be too scary for young kids. Many action scenes include death and high body counts including hand-to-hand combat and fighting with weapons including arrows, spears, and guns. There are also a lot of explosions and homes/villages set on fire.

What may be most disturbing to young children is the cruelty to animals and kids. Animals are hunted and killed, children are kidnapped, handcuffed, tortured, and often seen in peril.

There are some jump scares including a scary creature trying to attack a character.

The partial nudity in Avatar 2 refers to some side boob and bare behinds due to the appearance of the Na’vi. They are essentially naked in blue, but have loin cloths and small clothing covering the important body parts. The bodies are used in a non-sexual way.

There is conversation about “who knocked up” a character.

Some scenes can be quite emotional with grief of death of loved ones and flashbacks.

Themes of revenge and war are prevalent. A group of people invade another’s home. 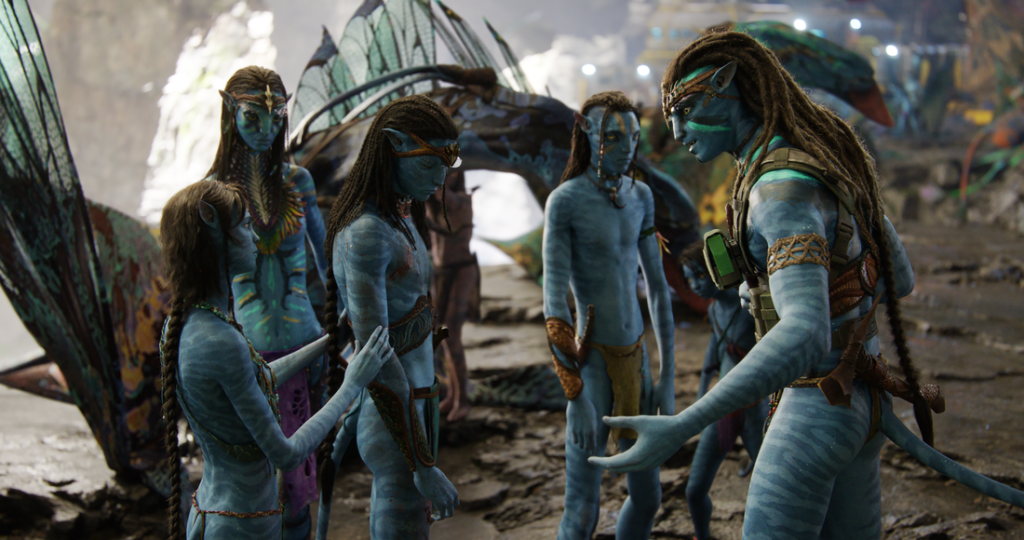 Is Avatar: The Way of Water Appropriate for Kids Under 13?

In Avatar 2 you can expect to see partial nudity, battle scenes, cruelty to animals and children, and profanity used by some of the characters. To sum it up, Avatar 2 is not kid friendly for all kids and will be boring for some.

Avatar: The Way of Water is somewhat of an anomaly, because I think young kids will love the underwater scenes and incredible visuals. It’s like being in a really cool Disney 3D movie attraction. I half expected water to spray at me while watching. You’re transported to another world when the Sullys make it to the Metkayina tribe and their islands.

However, some of the content is too mature for young ones, so I’d recommend Avatar 2 for kids ages 10 and up, if parents think they can handle some of the emotional and darker scenes.

Also, if you watch it in 3D, it’s even more impressive and immersive, but also watching a movie in 3D for over 3 hours made my head hurt and made me a little motion sick. So caution to parents with littles who get motion sickness easily. Avatar 2 may cause some nausea in 3D.

The lack of originality in story and dialogue is what surprised me, especially because James Cameron usually takes pride in details. He doesn’t spare any details in the visuals and VFX, but the dialogue is dumbed down. I grew weary of Marines and troops muttering a “hell yeah” (mixed in with oorah) every time some form of invasion plan was formed. And the villain is very single-layered.

The story of a man seeking revenge while others having to pay the price is not new. Only the setting has changed from land to water. I don’t think the runtime of 3 hours and 10 minutes is justified as there was a lot of filler not contributing to the world building. I watched a National Geographic video game for 3 hours, albeit a very cool video game.

I do expect Avatar: The Way of Water to make a lot of money, as there isn’t much in the theaters to watch, and this is definitely a theater film. But if you’re sleepy before you head out, you may need some Red Bull to keep you awake.

Avatar: The Way of Water will make waves for the plot, but it’s a visual feast. Go see it in theaters at the very least for the VFX eye candy.