Wondering if Netflix’s Wednesday is ok for kids? This new tv series by Tim Burton about Wednesday Addams is so good and a fun binge all year round. Is Wednesday kid friendly? Here’s what parents need to know in this Parents Guide to Wednesday. 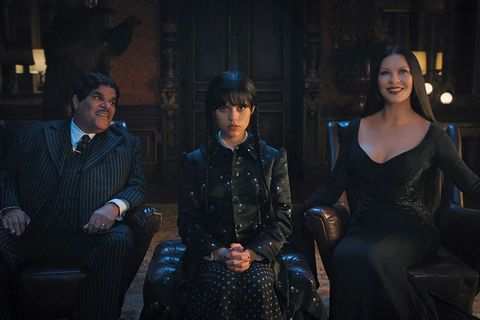 Jenna Ortega plays Wednesday Addams and after getting expelled from yet another school, her parents decide to send her to Nevermore, a boarding school where they met and fell in love. Nevermore is a school of outcasts, so surely Wednesday will fit in. But Wednesday doesn’t like to fit in.

When a series of murders and deaths occur in the nearby town of Jericho, Wednesday realizes there’s a monster on the loose that my be tied to Nevermore. But the more she digs, the more secrets she unravels.

Wednesday is rated TV-14 for fear, language, and violence which means some content may not be suitable for kids under 14 years old.

There is quite a bit of language in Wednesday including uses of sh*t, a**, bi*ch, damn, hell, and uses of Deity including “oh my g-d” and g-ddamn.

There are frightening and violent scenes including jump scares which could make Wednesday too scary for young kids.

Wednesday releases piranhas in a pool to try to kill classmates. A monster is on the loose that mauls people, leaving their bodies unrecognizable. Scenes show severed heads, legs, and arms.

There are several murders. Wednesday gets in fights with classmates.

A character vomits all over another.

A character chains people to the ground and then sets the house on fire to let them burn. Teens pull a prank and make it rain red paint, making it look like blood everywhere.

Some scenes are a little bloody and gory. Close up shots of the monster’s face are a bit scary.

There are several scary and intense scenes involving witchcraft and dark magic. Nevermore’s outcast turn into werewolves, sirens, hydes, and other types of creatures.

A character wears a low-cut dress. Characters flirt and kiss.

Wednesday is considered an outcast and is often bullied.

Wednesday has a complicated relationship with her parents.

Is Wednesday Appropriate for Kids Under 14?

Wednesday on Netflix is considered more a teen drama series and does have a flair for the macabre, but it could have been much darker. In Wednesday you can expect violence, murder and death, some gore and intense scenes, and profanity by some of the characters. To sum it up, Wednesday is not kid friendly for young kids, but should be reserved for tweens and teens.

Jenna Ortega is definitely the star and what makes this series a delight. Her dead panned delivery and wit made me laugh even when she kept a straight face. As a classmate comments that Wednesday Addams is not the girl of your dreams, she’s the stuff of your nightmares, I beg to differ.

Wednesday Addams is a vibe, and I love her. People will claim that Wednesday is not dark enough, and fans of The Addams Family may agree. Or maybe it wasn’t kooky or spooky enough according to the old Addams Family theme song.

However, this show is fantastic for young adult and teen drama fans. You get some edge while not going overboard into the dark side. You feel Tim Burton’s influence, but it’s also relatable to kids who don’t fit in.

Wednesday is a dark, but not too dark, series, mostly aimed at the teen crowd. Maybe not kooky enough for some audiences, but certainly entertaining for family viewing.

Prepare for a visually stunning series with some cheesiness, but well worth the binge. Wednesday is here to stay.

The Guardians of the Galaxy Holiday Special Parents Guide