From the moment I hopped off the plane at LAX (with a dream and a cardigan), Summer of Heroes in Disney California Adventure was everywhere. When I went to pick up my luggage at baggage claim, there was a huge sign with some of my favorite super heroes! I am obsessed with The Avengers, and especially Captain America, so I was already excited. After visiting Summer of Heroes, I have 5 reasons why you have to visit Disney California Adventure this summer!

This is going to be a little Captain America picture heavy. Captain America is my absolute favorite, not only because I adore Chris Evans, but I like good guys. So Cap represents to me what I want to be. Good, always fighting for what’s right, corny, and a loyal friend. We definitely had a moment at Disney California Adventure that day.

Make sure you grab a Times Guide when you walk in so you know when your favorite super heroes are available for pictures. We arrived in line about 20 minutes before Cap’s first meet and greet. There was already a good-sized line. When I had been last year, you could see Captain America on one side and Spider-Man on the other side. However, this time they informed us that first, Captain America would come out, then Spider-Man would switch out with him every 45 minutes. I was crossing my fingers we made it in time, because although I love Spidey, I was clearly there to see Cap all decked out with my gear.

I mean we clearly find each other amusing, right?

We bonded over my apparel choice and my rocking backpack. I was seriously so involved in my conversation that I didn’t even notice the woman who ran behind us to grab a backpack.

I adore this picture, and I love the character interaction during Summer of Heroes. Captain America never broke character, and he was a lot of fun! Well worth the wait, and this pic is going on my refrigerator.

Black Widow is also a great addition to the character lineup! She rolls in on her jeep and looks ready to kick some butt!

Guardians of the Galaxy – Mission: BREAKOUT!

Everyone I was with LOVED Guardians of the Galaxy, well except for the people who didn’t like Tower of Terror in the first place. They say it’s more intense than Tower of Terror. I love the look of the outside building, the queue is really cool, and the music and energy are awesome! I took the chicken exit though. I just don’t like drops. I know, I’m sorry!

When I say this ride is popular, I’m not kidding. We arrived at rope drop one morning (park opening) and everyone was headed straight there. They either went straight to the standby line (which is probably what I would have done) or they went for a FASTPASS. Those are probably your two best options to ride unless you want to wait 2 to 3 hours later. The FASTPASS line was already past Carthay Circle when we arrived for a FASTPASS, so arrive EARLY if Guardians of the Galaxy – Mission: BREAKOUT is important to you!

An extra Guardians bonus is the Guardians of the Galaxy: Awesome Dance Off! It’s a cute show by the ride where Star-Lord, Gamora, and Groot host an awesome dance off, you know, just like the title says. Gamora and Star-Lord dance through the crowd, too. Groot usually meets right after the dance off, so if you want to be in line early then hang out to the left up front of the crowd. 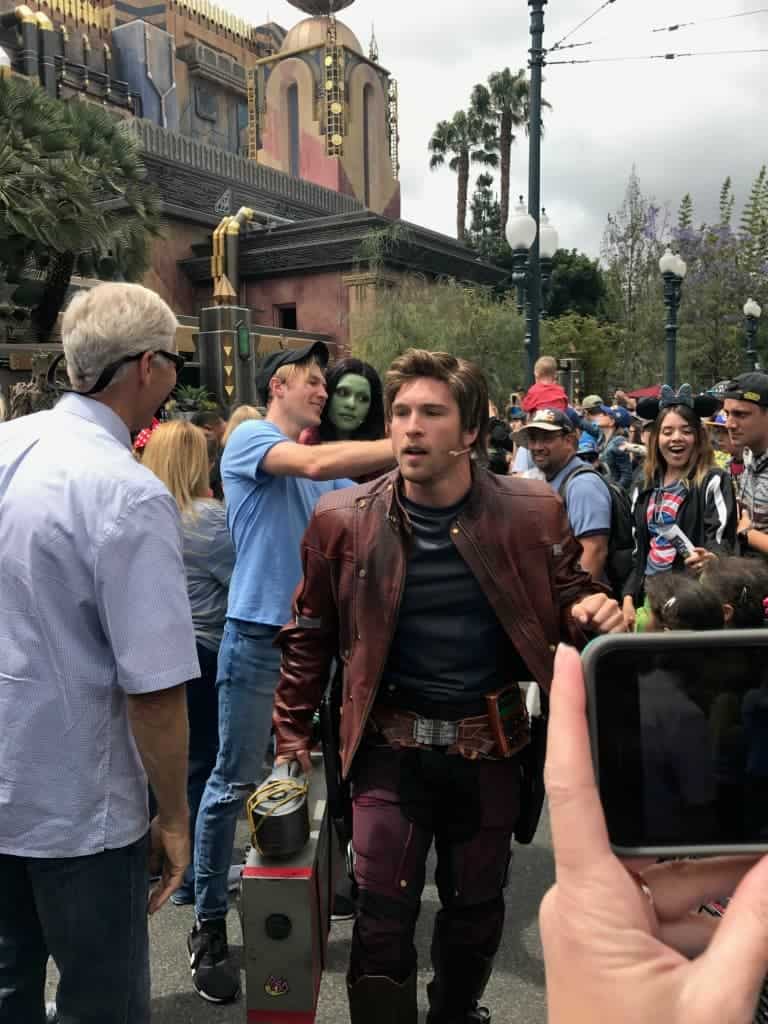 All the donuts, all the Groot bread, all the tacos! Seriously, so many delicious snacks, so little time. I’ll post some pics of my faves, and let my friend, Sarah from Savoring the Good, show you in her video a lot of the Summer of Heroes food options!

Yes, I said free! I couldn’t believe my eyes when I saw the sign. They have a few chairs for a quick face paint, and it’s super fun! The line is first come, first served, and no changes from what’s listed on the picture. It’s located next to the Hyperion Theater. I chose an Agent of SHIELD symbol and felt pretty dang cool, thank you very much.

We saw Avengers Training Initiative going on while we waited in line for Captain America. It was so fun to watch and it’s something my girls would love to participate in! I mean, I would also love to participate, but sadly no adults. Avengers Training Initiative is open to children ages 4 to 12 and the child participating must be at the sign-up. To put down a super-hero-in-training’s name, go to the kiosk in the Hollywood Backlot near Stage 17 and Sunset Showcase Theater. Ask a Cast Member if you are unable to locate the kiosk. Registration for each day’s shows begins when Disney California Adventure Park first opens, including Extra Magic Hours.

If you’ve participated in Jedi Training, then it’s the same general idea. Here the kids learn some awesome moves like evade, thrust, defense, shield, and intimidation. Then they can throw a Captain America shield to help stop the evil Hydra agent. Here’s a quick glimpse of what your kiddos can learn from Black Widow and Hawkeye!

If you are a Marvel or Super Hero fan, you won’t want to miss Summer of Heroes. This was my dream event, and I was a like giddy little girl running from one place to the next. I want to go back to try everything I didn’t have time to do. Anyone want to come with? Avengers Assemble!

Thank you, Disney, for inviting me to the Cars 3 Event and providing travel and accommodations. All opinions about my love for Captain America are my own. Obviously.

The Best Disneyland Snacks You Can’t Get at Disney World
Categories: Disney, Travel