Wondering if Malcolm & Marie is ok for kids? If you don’t like the f-word, then I’d skip this one. Malcolm & Marie is rated R for language and sexual content and is not kid friendly. You’re basically the audience on one super long argument. Here’s what parents need to know in this Malcolm & Marie Parents Guide. 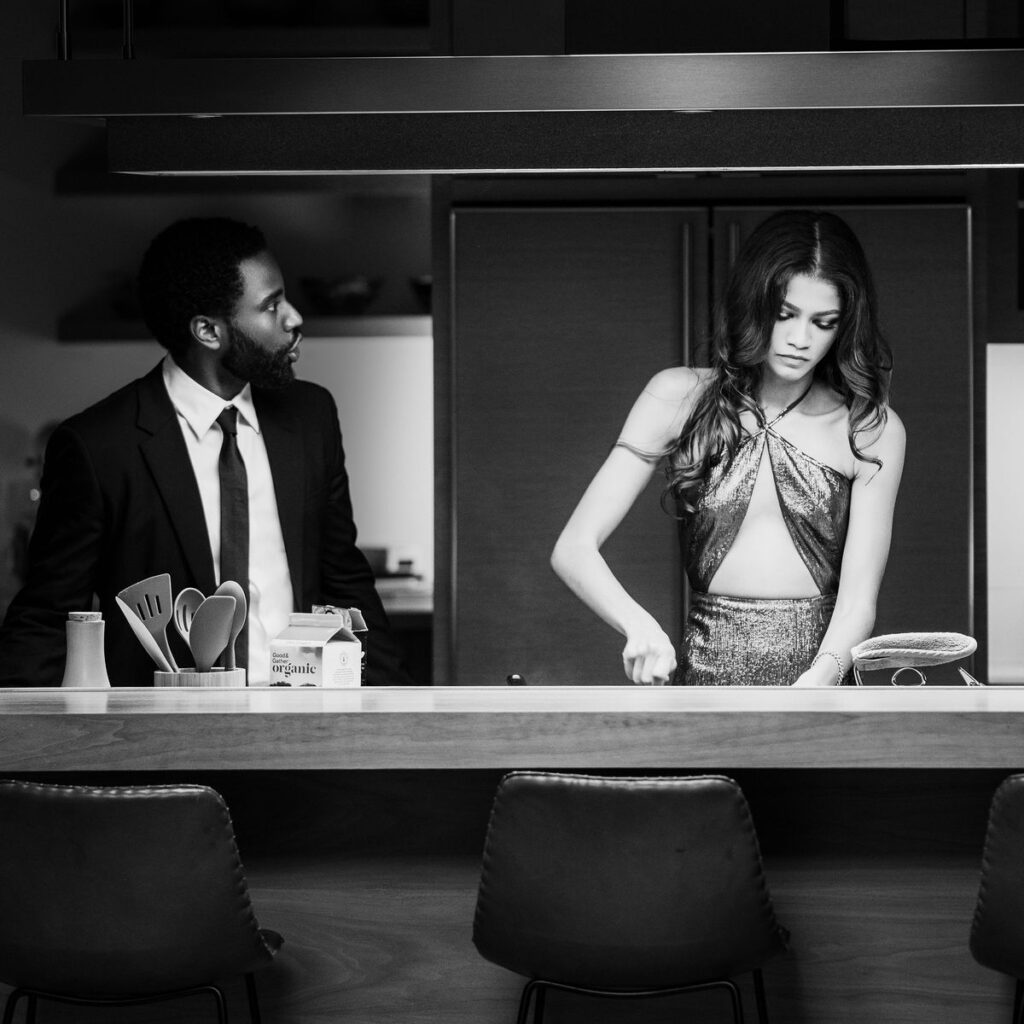 Malcolm & Marie takes place in one night after a filmmaker (John David Washington) and his girlfriend (Zendaya) come home from his movie premiere where he’s expecting tons of critical praise from journalists, even that white lady from the L.A. Times. Expecting the same celebration from Marie, Malcolm is unhappy with Marie’s displeasure from the evening.

Still in her gown while making him macaroni and cheese, and with further prodding, Marie tells Malcolm she’s upset he didn’t thank her in his speech. They hash it out only to engage in other arguments as the night continues, and some of it gets very messy.

Why is Malcolm and Marie rated R? Parents need to know that there are at least over 100 uses of the f-word, sexual scenes, and smoking.

I stopped counting the f-words, because it just became tedious and too much. But it felt like every other word was some variation of fu–, including motherf—er. There were also plenty of uses of sh–, a–, a–hole, and words like cunt and nigga.

Zendaya is shown on the toilet in several scenes as she lifts up her dress, but there is no nudity.

There are sex scenes that can get graphic, and at one point, Malcolm lifts up Marie’s dress and bites her bare bottom. The way the camera moves makes the scenes more sensual.

Some scenes involve both Malcolm and Marie performing oral sex, but no explicit nudity is shown.

Marie wears a white tank top with no bra and you can see the outline of her breasts and nipples.

Both Malcolm and Marie smoke.

The arguments between Malcolm and Marie get very heated and mean, hurtful, and borderline abusive things are said. Marie talks about her addiction to drugs.

In one scene Marie wields a big knife.

Is Malcolm and Marie Appropriate for Kids Under 18?

I’d skip Malcolm and Marie for teens. Some teens may want to watch, especially if they are fans of Zendaya, but the content is too mature and most may find the film boring.

The film is in black and white, involves two characters, and takes place in the same house. There’s just not a lot there. Is it beautifully shot? Yes. Is it artistic? Yes. Do I feel like I’m being lectured? Yes.

Zendaya and Washington are both incredible and make this film work as much as it did, but some of the speeches felt trite. I’m glad Marie called out Malcolm during his diatribe on some journalists. “You’re complaining about reviews that haven’t even been written.”

She calls him out on many things, but the favor is returned with some cruel accusations.

At times, I felt like an intruder on a couple’s intimate thoughts and feelings, and this isn’t the unhealthy dialogue that kids should be wanting to mimic in their own relationships. Malcolm and Marie had promise, but I was more interested in the mac and cheese.