Have you seen Tiger King on Netflix? It’s all people can talk about, and it’s one of the craziest shows. Here are the wildest Tiger King quotes from Joe Exotic, Carole Baskin, and the rest of the cast of Tiger King: Murder, Mayhem, and Madness. You won’t believe what they said! 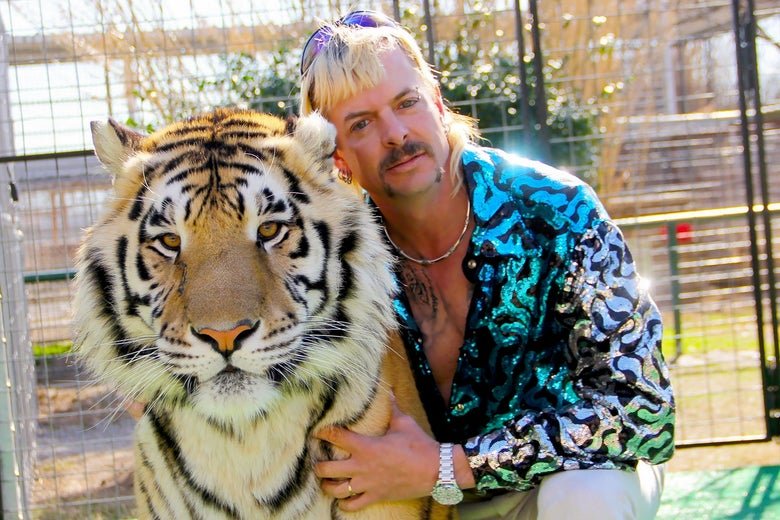 The Craziest Quotes From Tiger King on Netflix

If you haven’t seen it, I don’t recommend Tiger King for kids. The show is a documentary series around Joe Exotic and his feud with Carole Baskin.  They hate each other (and are obsessed with each other) while both proclaim how much they love big cats.

The end result is Joe in jail for murder for hire, plus animal cruelty. No, I can’t make this up.

Each episode introduces a new set of eccentric characters who say shocking things. Check out some of the most insane quotes from Tiger King from Carole Baskin, Doc Antle, and Tim Stark. They are just as wild as the animals.

Is there a good guy in all of this? Doubtful, but at least the Tiger King memes are funny.

Joe is a character, and perhaps the most famous from Tiger King. He tends to say the most outrageous things, and a lot of his anger is directed towards Carole. And well, he’s the one who ended up in jail. Check out what Joe Exotic says about Carole Baskin. 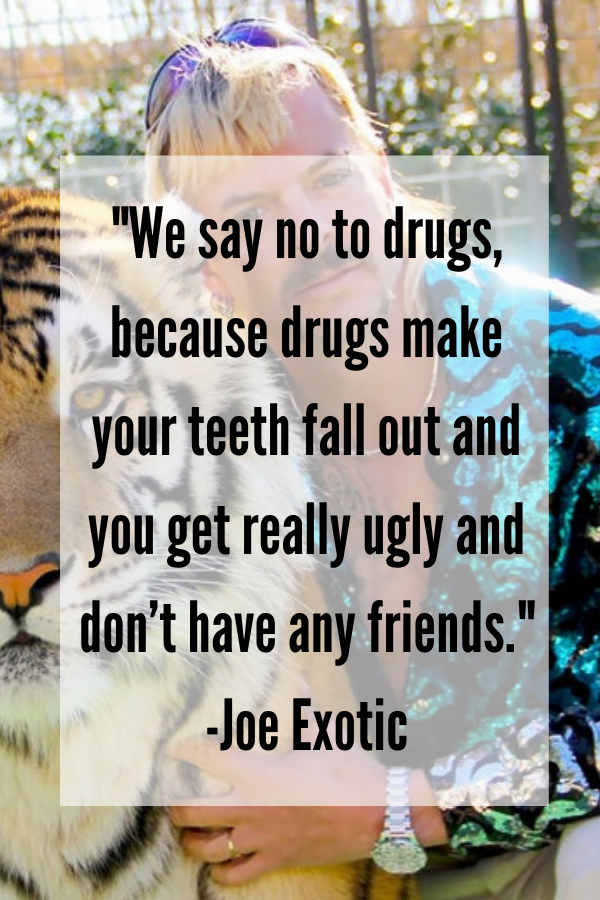 We say no to drugs, because drugs make your teeth fall out and you get really ugly and don’t have any friends. -Joe Exotic

It is a ticking time bomb if somebody thinks they’re going to walk in here and take my animals away. It’s gonna be a small Waco. -Joe Exotic

This is my little town. I’m the mayor. The prosecutor. The cop, and the executioner. -Joe Exotic

I saw a tiger, and the tiger saw a man. -Joe Exotic

Carole Baskin’s third husband, they can’t find his body. We believe that she fed him to the tigers. -Joe Exotic

I’d shoot you, before I shot my cat. -Joe Exotic

Before you bring me down, it is my belief you will stop breathing. -Joe Exotic

Animals don’t judge you, as long as you’re really good at heart. They don’t care who you are or what you’ve done in the past. -Joe Exotic

Everybody’s got a past. -Joe Exotic

The woman’s just obsessed with me. -Joe Exotic

She can make all these people think that everybody else in society are abusers but her. -Joe Exotic

Quotes from Carole Baskin and Howard

Howard Baskin is Carole’s 3rd Husband. Did you know he graduated from Harvard Business School with an MBA? Yes, the real Harvard. Bless him.

Carole is the Mother Teresa of cats. -Howard Baskin

My email says, “Judge me by the enemies I have made.” -Carole Baskin

Hey all you cool cats and kittens. – Carole Baskin

People like Joe have an amazing grip over people generating an affection and a devotion that is totally irrational. -Howard Baskin

I really appreciate the fact that none of these people like me. -Carole Baskin

The Rest of the Crew

The rest of the cast of Tiger King is just as important to the story. Rick Kirkham used to be a producer for Joe Exotic, Doc Antle is the one everyone worships (except Carole).

John Reinke is the manager of GW Zoo and Erik Cowie is the head keeper at the zoo. Barbara Fisher was Doc’s former apprentice, and Mario Tabraue, who was he again?

Me and Joe made a pact. If anything went bad, we were gonna shoot each other. -John Reinke

He has a hate for Carole Baskin. Nasty hate. -Rick Kirkham

Nothing is cooler, sexier, and more significant to the world we live in today than a tiger. -Doc Antle

According to Thomas Jefferson, any law that you think’s unfair or unjustice, it is your obligation, it is your responsibility to stand up to that bullsh– law. -Tim Stark

This guy is a chick-getter. -Barbara Fisher

Sometimes they say that I’m the prototype for Scarface. -Mario Tabraue

I had a crazier partner than me who said, “Let’s just cut him up and burn him.” So we burned him. -Mario Tabraue

Doc said men are pigs and women are sheep. I was a sheep, I guess, ripe for the slaughter. -Barbara Fisher

And the concluding quote to this series…

They all got what they wanted, the Tiger King in jail, in a cage.

And if you need some of these quotes on a t-shirt, check out these funny Tiger King shirts!

[…] don’t what are crazier – the Tiger King quotes or the Tiger King memes. But nothing can top the insanity of actual show. If train wrecks are your […]

Is Tiger King on Netflix Family Friendly? No. Here's Why.

[…] of the Tiger King quotes like, “This is my little town. I’m the mayor. The prosecutor. The cop and the […]