The 2022 FIFA World Cup has begun and so have the memes! These funny and emotional World Cup memes will have you laughing or crying, depending on how your team is doing. And is it really a World Cup without FIFA memes that throw shade? 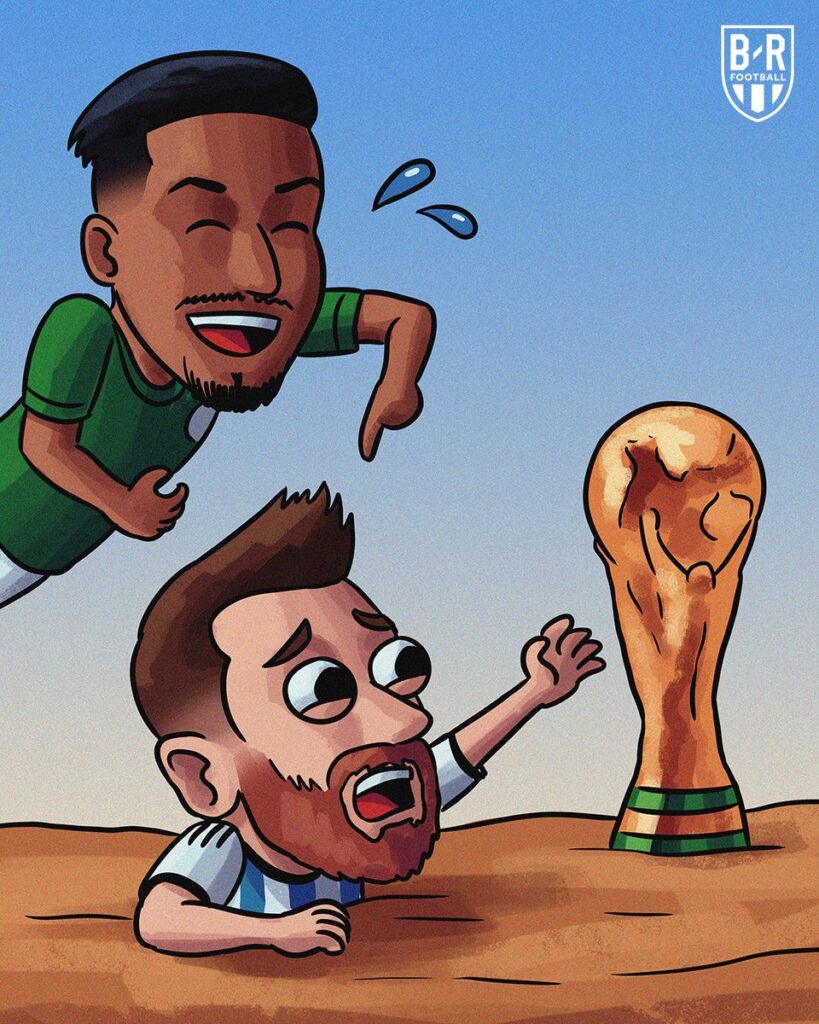 The World Cup has its fans, and they love their memes! This is time of the year when some people forget about Thanksgiving memes, and are watching soccer all day. Who needs turkey? Gooollllllllll!

When you do what you gotta do to watch the World Cup.

Teacher: “No watching the World Cup during class”

Me and the boys: pic.twitter.com/bfG0XNivGv

Everyone just stay calm, the World Cup is here.

When you realise the World Cup starts today pic.twitter.com/Enj5D1GJyG

Team Spirit in the World Cup

The feelings are strong when your team wins or loses.

It’s all about perspective…or points.

When Morgan Freeman has more appearances than your team.

Maguire training with England ahead of the World Cup gamespic.twitter.com/McowfxwQ0F

The moment this World Cup came to life 🤩 pic.twitter.com/x3kh1KlYKH

This is What Dreams Are Made Of

It’s the hard work and dreams for me.

A kid born in a refugee camp wasn’t supposed to make it! But here we are GOING TO THE WORLD CUP. Don’t let no one tell you that your dreams are unrealistic. KEEP DREAMING, KEEP ACHIEVING! pic.twitter.com/GT4hjz4ebO

When There’s an Upset

But sometimes it doesn’t always work in your favor. I did not see Argentina’s loss coming.

Perhaps the only appropriate response.

I just broke my TV in front of 40 guests at my birthday party because of Argentina. My wife took our kids crying and said they would spend the week in a hotel. This game has ruined my life and my party. I can’t take any more of this. Goodbye. I’m not a fan anymore. pic.twitter.com/OhGSoeY9Pi

Or Germany’s loss. But sometimes fans have to console each other.

the world during those 3 minutes where both spain and germany were out pic.twitter.com/deMPPFbZ21

“That’s what Germany deserve after my goal didn’t count back in 2010 haha but no seriously, safe flight back lads.” pic.twitter.com/BTj6sybX4B

Mexico watching the USMNT go through a rollercoaster of hope and despair against the Netherlands. #USAvNED pic.twitter.com/QuLMi4k7RQ

When There’s a Comeback

Messi is a man of his word 🙌 pic.twitter.com/rQQCnqqPc8

And then there’s always the flops.

This one made me laugh! Respect.

The Canadian national team has clearly watched and taken inspiration from 2006 rom-com soccer classic SHE’S THE MAN. No choice but to respect pic.twitter.com/IoPgLwkvia

Ronaldo hearing FIFA announce it as a Bruno goal pic.twitter.com/DPzz5OAynw

Even Ryanair is getting in on the shade.

THE USA QUALIFY FOR THE ROUND OF 16 IN THE WORLD CUP!!! 🇺🇸🇺🇸🇺🇸 pic.twitter.com/cQlk5c0Nol

Ronaldo on the Bench

Dang, y’all had feelings about this one.

When There’s a Break

Me right now when there are no World Cup games today and tomorrow. pic.twitter.com/nINoqbuCms