It’s hard not to miss the Toothsome Chocolate Emporium & Savory Feast Kitchen at Universal Orlando when you go to any of the parks. The inviting building and big chocolate sign screams, “Visit me!” Not only is it a restaurant, but it’s also a gift shop and candy store where you’ll find some of the most creative treats around. Check out my family’s Toothsome Chocolate Emporium Review and whether we’d eat there again. 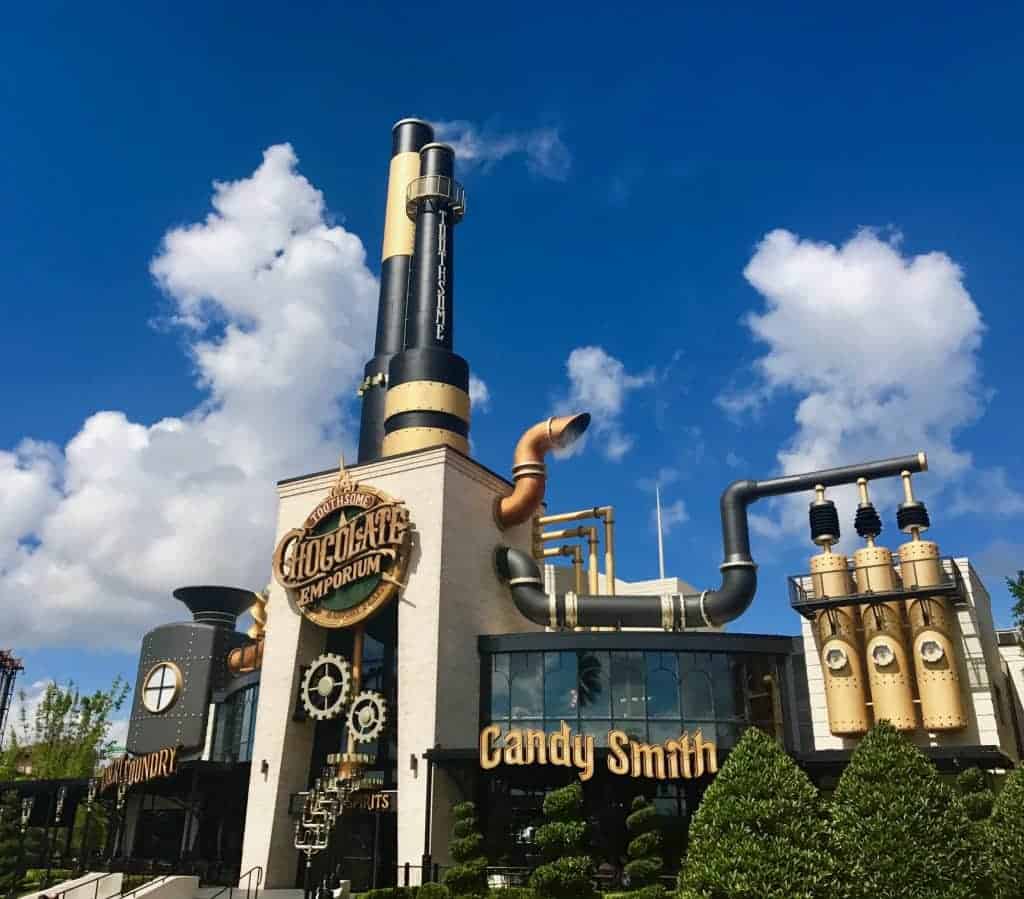 I always wondered what the story was behind the steampunk building of Toothsome. Was it Willy Wonka? No. According to Universal, here’s some background they released when Toothsome first opened.

From the Alps to the empire of the Aztecs, from Mongolia to Madagascar, Professor Doctor Penelope Tibeaux-Tinker Toothsome learned new and fascinating methods of infusing chocolate into the most extraordinary recipes, making friends and receiving honors everywhere she went. Upon returning home to London, Penelope determined that she would share her love and knowledge of chocolate with the world. She set about building The Toothsome Chocolate Emporium & Savory Feast Kitchen, an enchanting 19th century themed, Steampunk inspired dining establishment with a façade of towering smokestacks and an interior adorned with intriguing gadgets and gizmos.

Admittedly, the story seems a little muddled, but upon first glance of Toothsome, everything has a cool vibe and the details are extraordinary. We saw Penelope and her robot friend, Jacques, walking through the gift shop when we first entered. Later they came by the table to visit inside the restaurant. 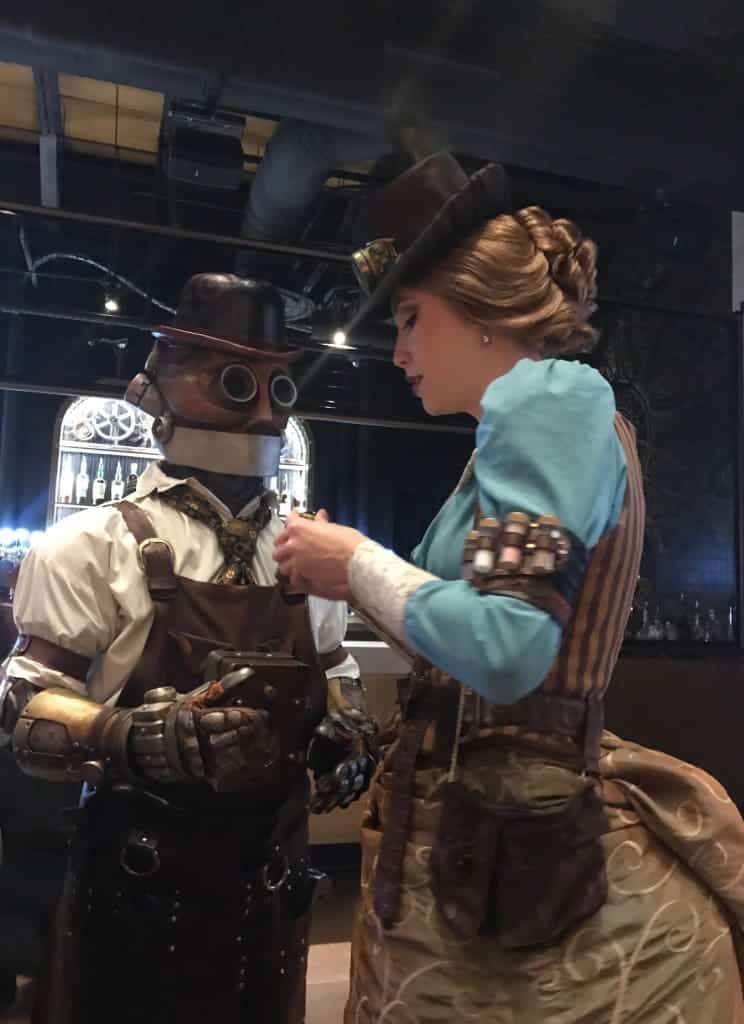 It’s a fun meet and greet, and they even gave us recommendations for dessert!

If you have a sweet tooth, this is the place for you. They offer chocolates such as truffles in one case and in another, they have specialty bakery items such as cupcakes, cookies, cake pops, and chocolate-covered pretzels. 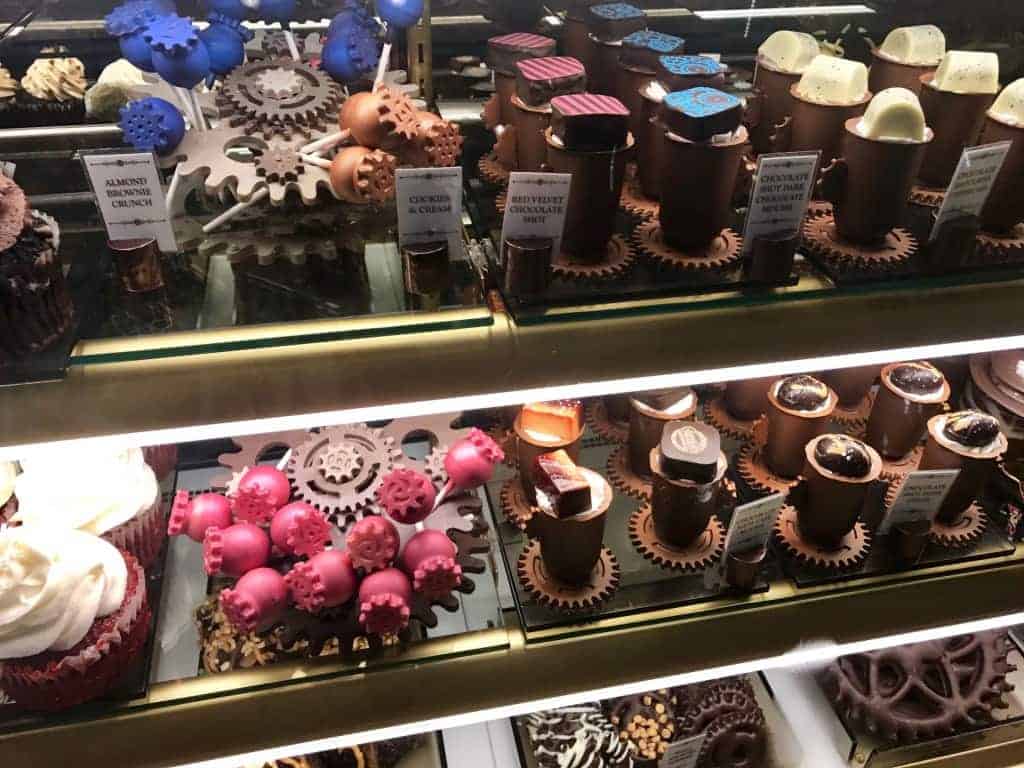 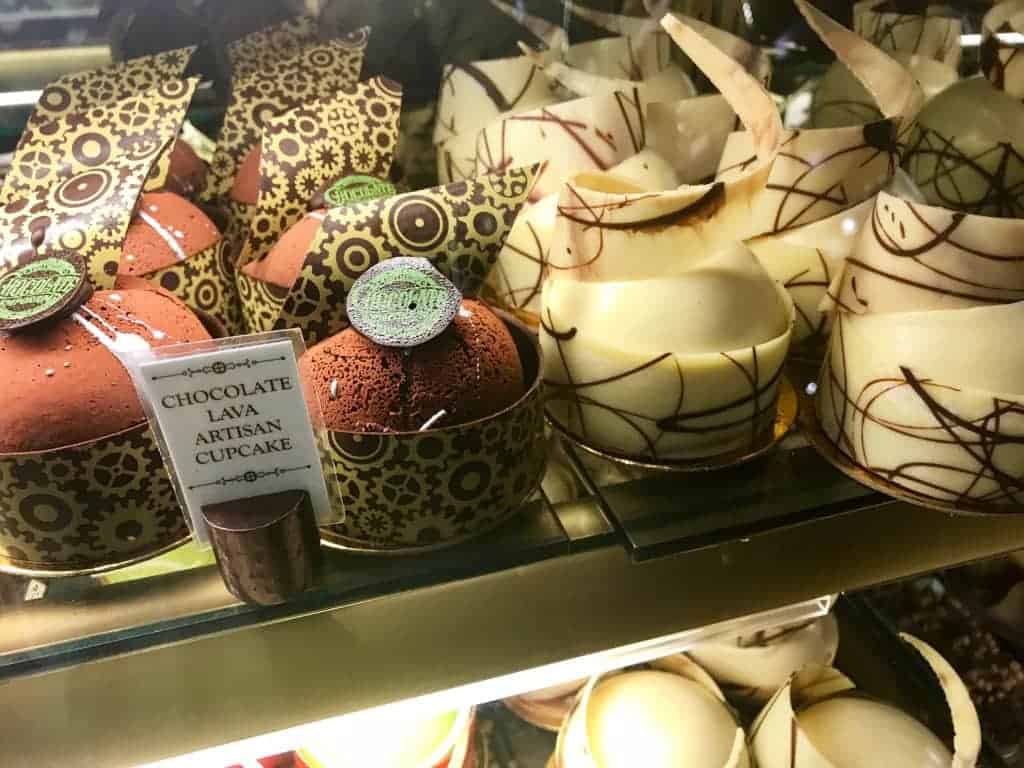 The cupcakes are works of art and delicious, too!

One of the things Toothsome Chocolate Emporium is famous for are their huge milkshakes. I tried drinking one on my own and failed. We got one to share after our meal – the Chocolate x5 milkshake. When they saw chocolate, they mean it. It was really rich, maybe even a bit of too much chocolate. I have tried the Salted Dulce de Leche milkshake (because when you say dulce de leche, you have to try it), and I liked it better.

They have a carry-out option for milkshakes and dessert if the wait is too long for the restaurant or if you just want dessert. A nice bonus is that you get to keep the Toothsome cup it comes in. 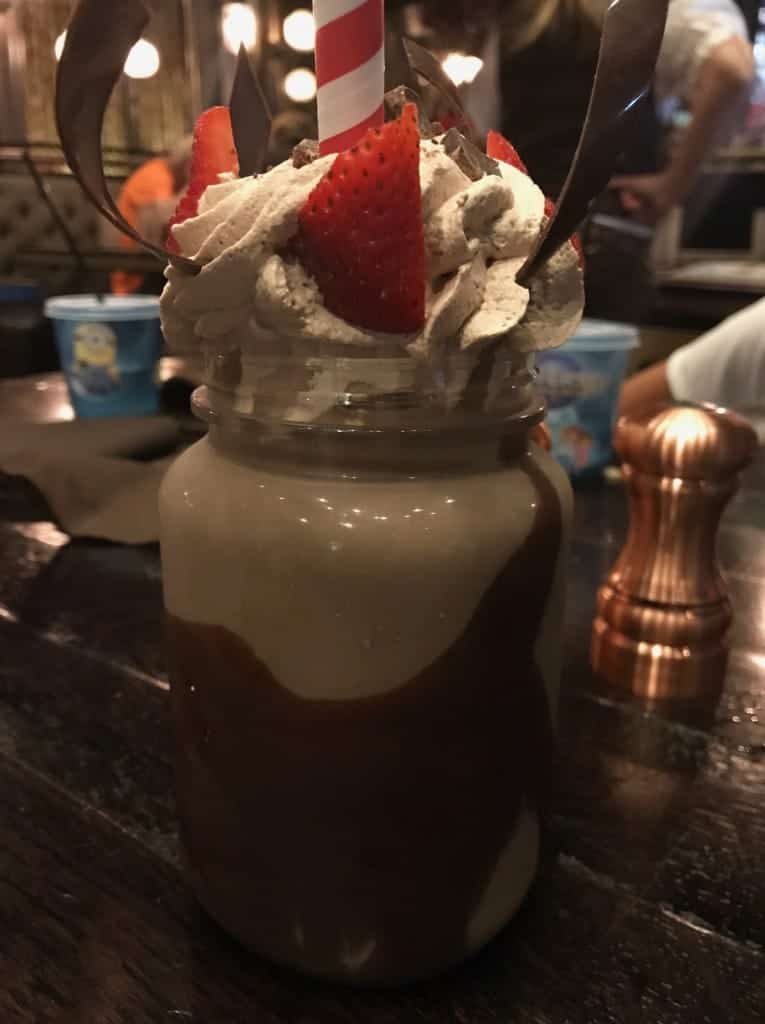 We arrived around 10:45 a.m., because we happened to be walking around Universal CityWalk and were seated right away. That’s definitely an early lunch. By the time we were finishing up, the crowds were rolling in. The nice thing about Toothsome is that you can be put on a waiting list, and they’ll text you when your table is close to being ready. This way you don’t have to just hang out right by the restaurant, you can do some exploring nearby.

I ordered the Waldorf Chicken Salad and the flavor was really good. It was hard for me to find the chicken, but overall, I would order it again. 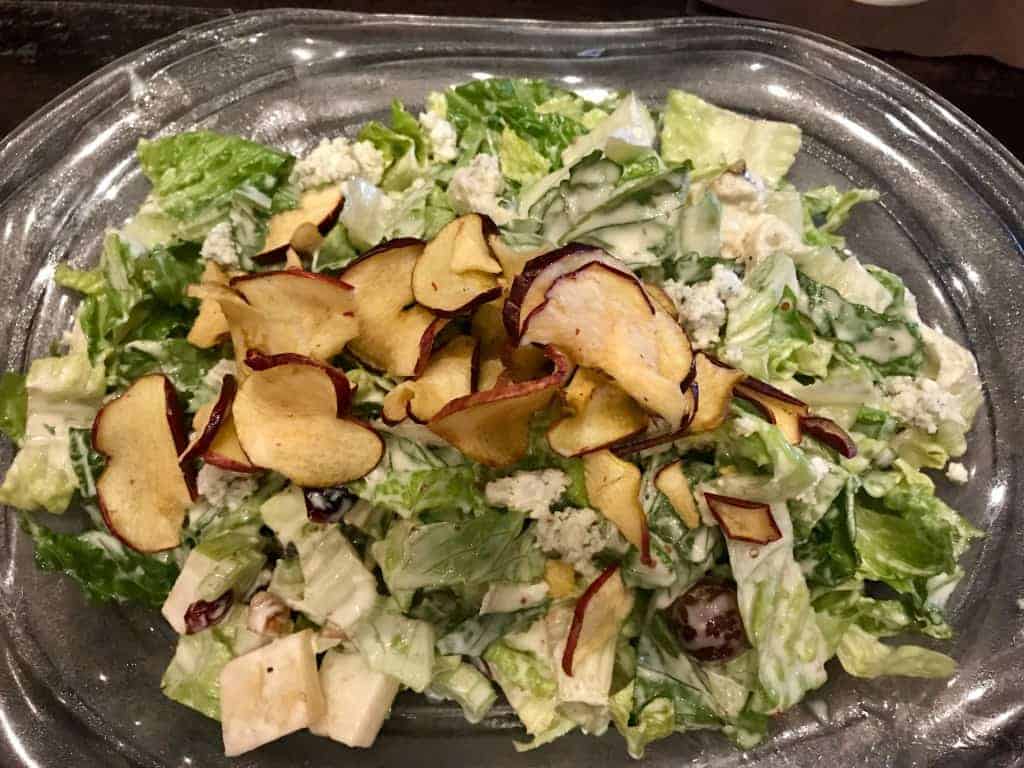 My husband ordered Totchos. Let me just preface this by saying my husband is obsessed with Totchos, but he was used to tater tots with nacho cheese, bacon, tomatoes, lettuce, and onions. Toothsome’s Totchos had Green Chili, Crispy Pork Belly, and Andouille Sausage Cheddar Cheese Sauce, so he was nervous to order them. Spoiler alert: He loved them! The moral of the story is can you really go wrong with tater tots? 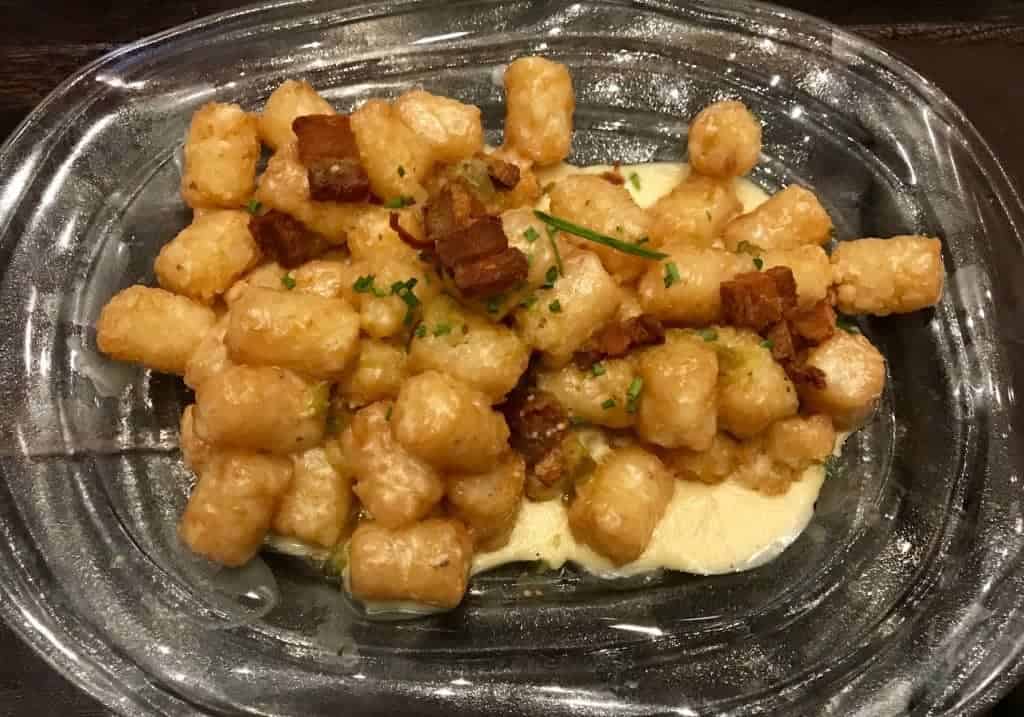 My children ordered chicken tenders and waffles, and they were thrilled. We had a really great dining experience, and we tried to come back another time during our trip. However, we were delayed at an attraction and couldn’t get back in time when they sent us a text that our table was ready.

We would absolutely return to Toothsome Chocolate Emporium at Universal Orlando. Two thumbs up from everyone in the family! 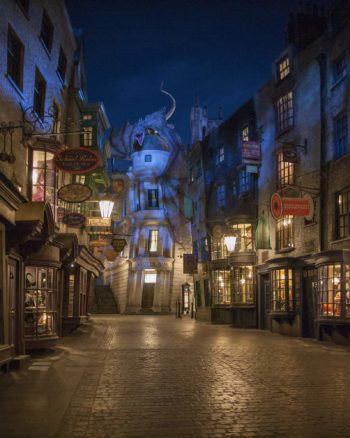 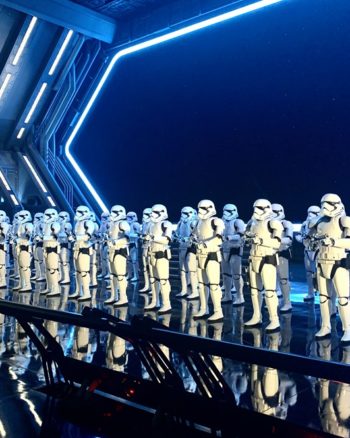 How to Score a Rise of the Resistance Boarding Group and Why I Love the Virtual Queue
Categories: Disney, Travel 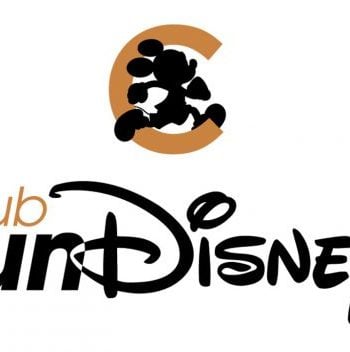