Wondering if The Lost City (2022) is ok for kids? This action-adventure is rated PG-13 and may not suitable for kids. The Lost City has a lot of sexual references and innuendos, so it’s not kid friendly for younger ones. Here’s what parents need to know in The Lost City Parents Guide.

Reclusive author Loretta Sage (Sandra Bullock) writes about exotic places in her popular adventure novels that feature a handsome cover model named Alan. She writes as she mourns the death of her husband, once a historian, now a romance novelist. While on tour promoting her new book with Alan (Channing Tatum), Loretta gets kidnapped by an eccentric billionaire (Daniel Radcliffe) who wants her to lead him to an ancient city’s lost treasure from her latest story. Alan sets off to rescue her, determined to prove he can be a hero in real life and not just some model, but Loretta wants nothing to do with him.

The Lost City is rated PG-13 for violence and some bloody images, suggestive material, partial nudity and language which means some material is not suitable for kids under 13.

Language in The Lost City

There is moderate profanity in The Lost City including words like sh*t, a**, a**hole, many words of Deity (OMG, Jesus Christ), and sexual words like dick, anus, and slut.

There is more violence than I expected in The Lost City including characters shooting at each other, and blood spurting over another. There is hand-to-hand combat and a car crash. Most fight scenes are over-exaggerated and used for comedic purposes. However, one scene is particularly gruesome and could frighten younger kids.

There is a scene with a male’s naked butt (non-sexual) on screen for quite a bit and a character is seen shirtless several times. There are also a lot of jokes about penis size and other sexual innuendos, including a crude joke involving animals. 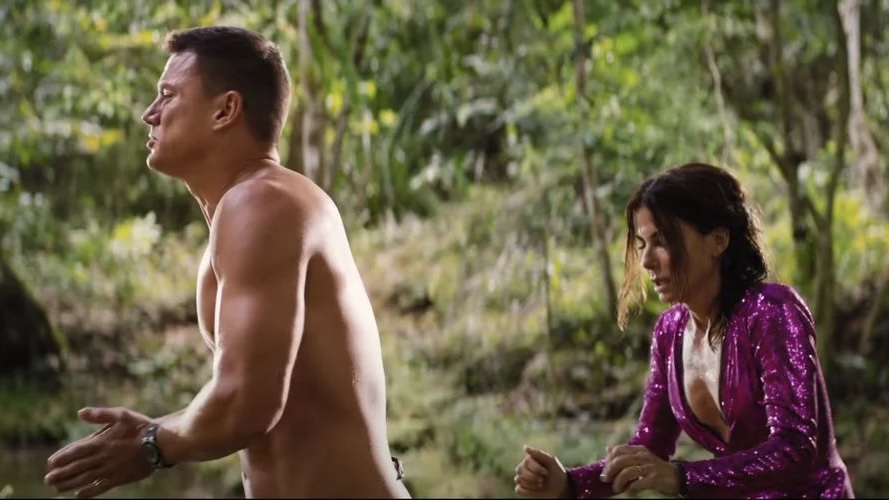 Is The Lost City Appropriate For Kids Under 13?

Parents need to know that The Lost City is crass and had some inappropriate jokes for younger kids. I would recommend The Lost City for kids ages 14+ due to sexual content and innuendos. Unfortunately, the inappropriate jokes are unnecessary, because that’s not what makes this film funny and entertaining. So what could have been a family film may now be reserved for families with teens and older who are ok with the sexual content.

The Lost City is jam-packed with star power and teens may want to watch for Daniel Radcliffe. Comedic chemistry and timing is fantastic amongst Bullock and Tatum, and Radcliffe as a wanna-be menacing villain also draws out the laughs. While some plot points are predictable, the actors’ charm helps you forget some of that.

Make no mistake, The Lost City is funny, but it’s screwball funny, and that may not appeal to you. It’s also for a more mature audience than Jungle Cruise. The Lost City leans into stereotypes and also tries to break some with a sensitive male lead who doesn’t mind being objectified.  I stan Loretta’s hot pink sequined jumpsuit, and that in itself deserves applause.

The Lost City is a ridiculous, absurd, and heartwarming package, and it knows its audience. While I wish it was more kid friendly, it may be the entertaining distraction needed right now.

Doctor Strange in the Multiverse of Madness Parents Guide