Wondering if Space Jam 2 is ok for kids? Space Jam: A New Legacy is rated PG for some language and cartoon antics. Granny can get a little sus, but Space Jam 2 is a fun ride for the whole family. Here’s what parents need to know in this Space Jam 2 Parents Guide.

As the movie begins, we meet a young LeBron who is chastised by his basketball coach for wasting his time on silly video games. If he wants to live up to his potential, he has to focus.

Fast forward to now basketball superstar, LeBron is married and has two sons, trying to impart some of that same message and focus to them. However, one of his sons is talented in developing video games, but his dad doesn’t recognize that. He and LeBron get trapped in digital space by an angry Al. To get home safely, LeBron teams up with Bugs Bunny, Daffy Duck and the rest of the Looney Tunes gang for a high-stakes basketball game against the Al’s digitized champions of the court — a powered-up roster called the Goon Squad. It’s Tunes Squad vs. Goon Squad, but the Tunes have to win, so LeBron can get home.

Why is Space Jam 2 rated PG? There are a few swear words and some cartoon violence. 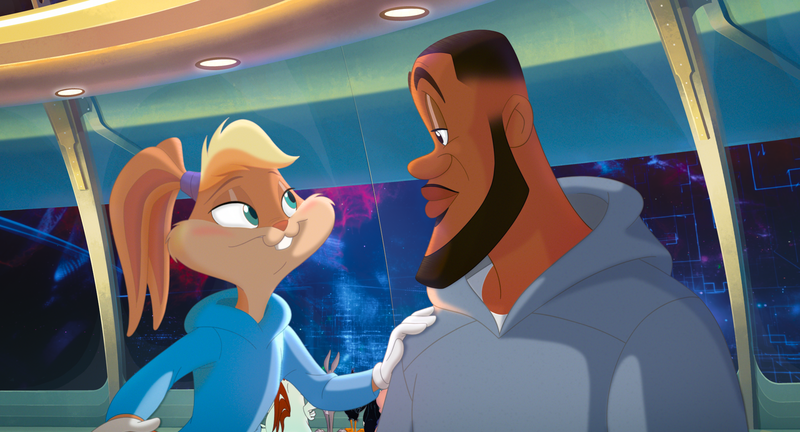 There are a couple uses of hell and damn, as well as words like stupid, butts, sucks, losers, and the phrase “son of a glitch.” One character is angry and starts yelling expletives that are bleeped out. There is also a use of “oh my g-d.”

Space Jam: A New Legacy does have some mature situations involving LeBron and his sons. Sometimes he pushes them too hard and Dom feels like his dad doesn’t understand.

Some of the characters on the Goon Squad can be a bit scary for super young children.

Is Space Jam: A New Legacy Appropriate for Kids Under 8?

Space Jam 2 has traded out a crop-top wearing Lola Bunny for a couple of swear words, but overall it’s appropriate for kids over 8. Kids younger than that can also watch as the Looney Tunes are here to entertain the younger crowd. The nostalgia hits hard, and I enjoyed it more than I expected.

LeBron quips in the film, “Athletes acting. That never goes well.” And yeah, he should stick to basketball. I respect it wasn’t a remake in the sense they didn’t choose the same storyline as the original. However, the story is the weak point of Space Jam 2. I’m still confused by the villain’s motives.

Space Jam: A New Legacy shines in trying to add something for everyone. The visual effects are impressive and next-level. They bring in the Warner Bros catalog  to add everyone’s favorite character somewhere. It’s like a Where’s Waldo game in the basketball game audience.

Next →
Best Never Have I Ever Season 2 Quotes on Netflix
Click here to cancel reply.