Since my first runDisney race, I knew I wanted to run in costume. Disney running costumes are the best! It was just my husband and I as The Incredibles. Fast forward a few years, and I’ve added a lot of BRFs (best running friends). That means group costumes! That’s why I love my friends. They’re up for anything, and they know how to rock a runDisney group costume. Here’s how you can put together your own group Disney running costumes.

It doesn’t have to be a large one. Like I said, it was just my husband and I for my first runDisney half marathon. We dressed as Mr. and Mrs. Incredible. And we had a ball! Funny enough, I found my first group of BRFs on the internet. Some people met through the DISboards, others through Twitter, and our first big meet-up was Disney Wine & Dine Half Marathon in 2013.

One of my very favorite Disney running costumes was epic. We represented different countries in World Showcase. If you’re running solo, ask on one of the many runDisney Facebook groups if anyone wants to do a theme together and then meet up at the race to take a pic. Be smart about meeting strangers though.

Pretty much my favorite picture and yes, I was the only one to keep my sombrero on for the race.

Choose a Theme for Your Disney Running Costumes

Most of the time my friends and I like to go against the race theme. So if it’s Princess Half Marathon, we might do a villains theme. We just like to think outside of the box. There’s nothing wrong with going with the race theme ,though, especially if you’re going to kill the group runDisney costume.

Some people are so talented, it doesn’t matter what they are, because their costumes always rock. For Tower of Terror 10-Miler, we chose a Ghostbusters theme, because it was the Ghostbusters 30th Anniversary.

For Tinker Bell Half Marathon, a couple of us did Star Wars and found some friends along the course to go with our theme. Pick a favorite character, a favorite film, a favorite accessory, or anything you want for your group Disney running costume! 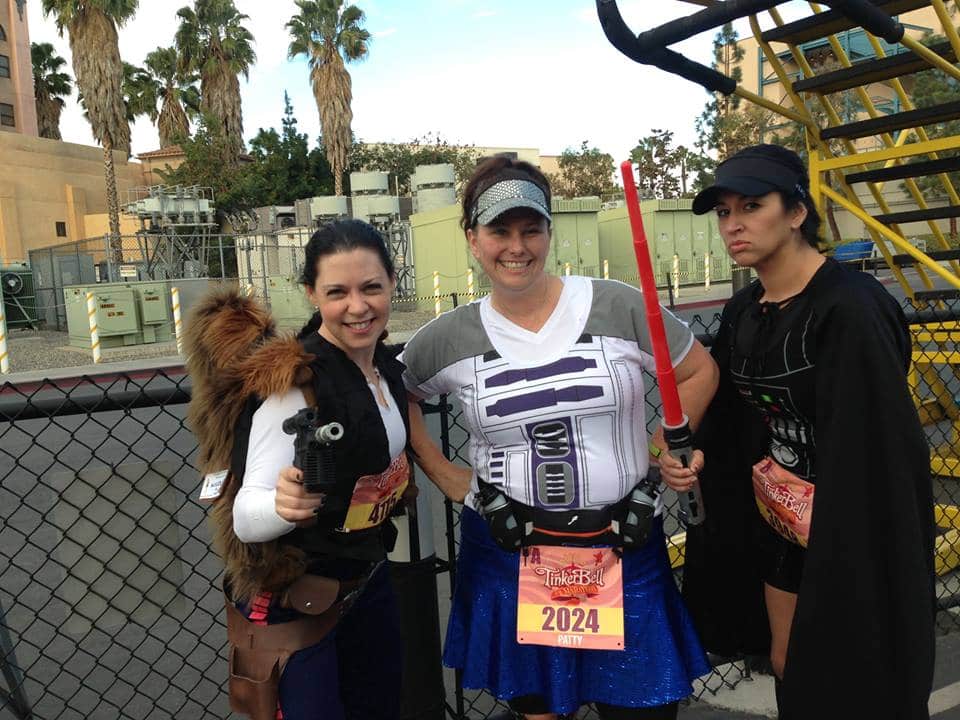 For a 10K or a 5K, it doesn’t matter. My personal favorite was when I was a Sister Suffragette when my group did a Mary Poppins Disney running costume theme. I had a whole lot of clothes on, and it was hot! But I had a base layer just in case I ever got too hot, I could shed some layers. I’ve run in a sombrero and a wig for 13.1 miles, too.

You can add little details to really make a costume your own. Fabric glue and hemming tape are my friends. Also craft foam sheets are awesome for details on visors. I made a seagull hat from Finding Nemo with craft foam.

My friend, Amy, always shops at Goodwill to find pieces for her costumes. I usually wear my favorite running shorts and then put a Sparkle Athletic skirt over it since they’re reasonably priced and come in the colors I need. Then I add compression sleeves to match. 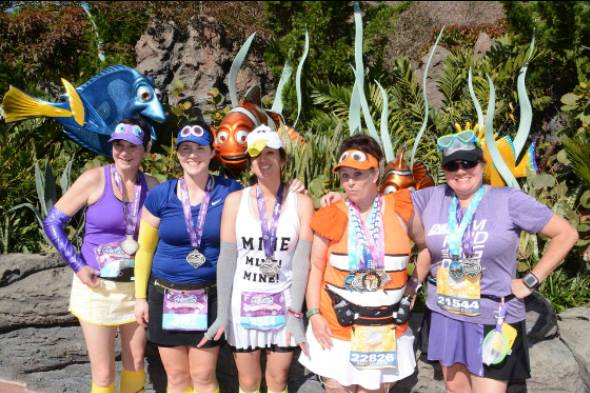 Add props if you want, too! I’ve run with Hulk Fists on my hands, carried a lightsaber, even a fake pistol when I was Panchito Pistoles from The Three Caballeros. Our Mary Poppins chimney sweeps ran with brooms.

Have Fun with Your Group Disney Running Costumes

Rock your costume and work it. Be proud of your work! I like to get into character and stay in character. It entertains me. Just have fun out there. You can PR in a costume! Do as much or as little as you want.

When you have a group, the theme really stands out more. You don’t all have to run together. We had a gaggle of ostriches from Fantasia and split off into many groups but found each other at the end.

Find fun photo opportunities. After we were the Dapper Dans one race, we went straight to the Magic Kingdom and fangirled the real Dapper Dans! Swoon. It was such an awesome moment!

Another time, our Nemo group took a photo in Epcot in front of The Seas with Nemo & Friends. As villains, we went into Epcot to ride some attractions and have Cruella De Vil photo ops at Test Track.

I like to commit. It’s half the fun. Bonus is that I can reuse these running costumes as Halloween costumes, too. Better yet, I can wear them to Mickey’s Not-So-Scary Halloween Party!

Now grab some friends and sign up for a runDisney race!

Bing Bong can be used a running costume or Halloween costume. 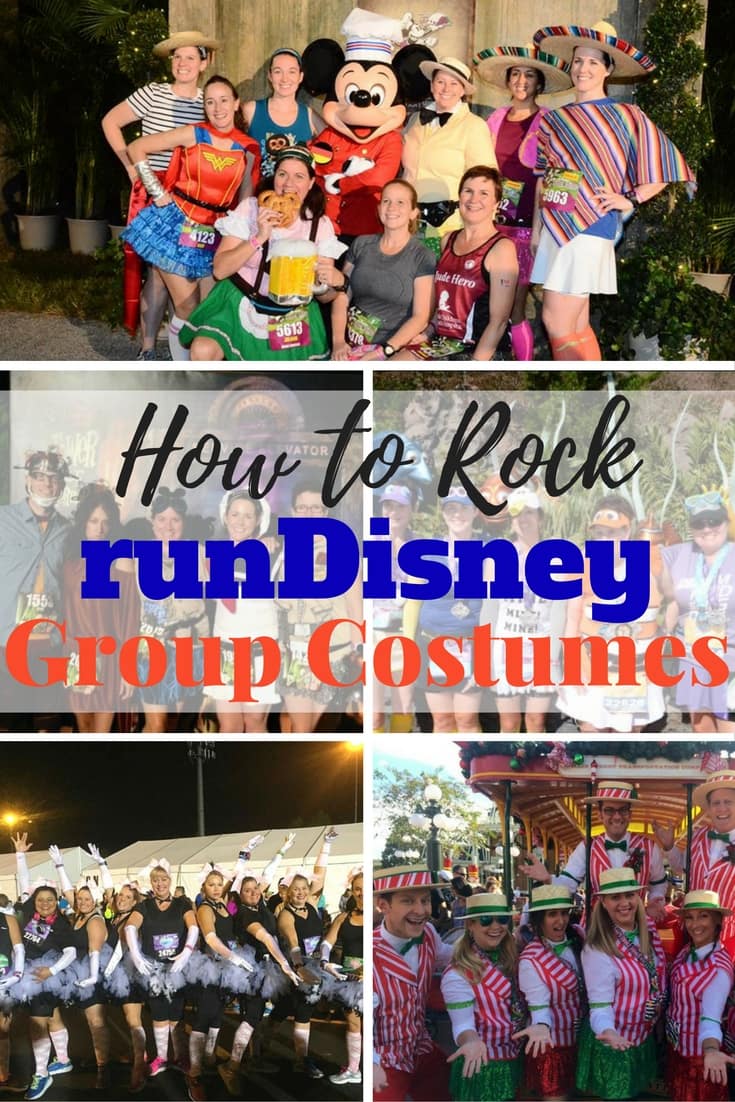 […] with friends! In fact, I’m often running with a big group and am mostly wearing a killer group running costume. We laugh, we sweat, we run, we walk together. We do not run more than two across though. That […]

Mickey's Not So Scary Halloween Party Dates,Tickets, and Prices

[…] can I say? Between Bus Stop costumes, running costumes, and Halloween, we like to dress up! Plus a lot are easy, DIY costume […]

Where are those adorable socks from for the Fantasia/ostrich costume?!

We ordered them from Amazon! They are Sports Katz Ballet Slipper socks. Thanks for visiting!

Why I Dress Up for Halloween Bus Stop Costumes - Lola Lambchops

[…] noticed me in a lot of costumes lately. Halloween is my favorite holiday, and I love any excuse to dress up in costume.  I borrowed an idea from my friend, Julie, who is a mom I look up to. She started dressing up in […]