Home » Travel » Disney » Moana Meet and Greet Info | Where Can You Meet Moana at Disney World?

Moana Meet and Greet Info | Where Can You Meet Moana at Disney World? 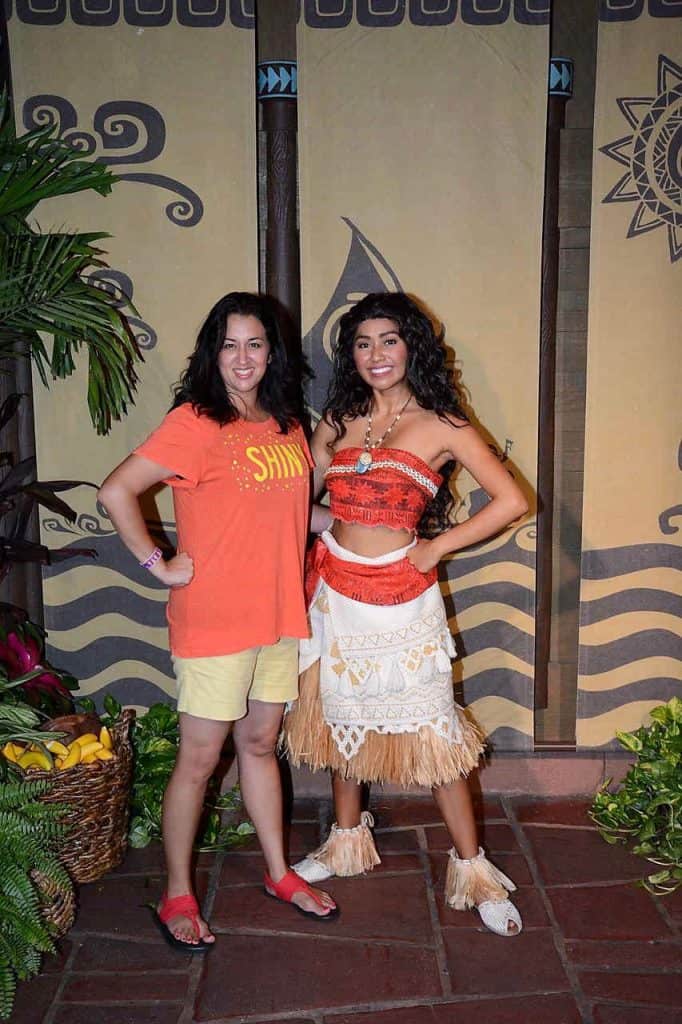 Where Can I Meet Moana at Disney World?

I last met Moana at Disney World in Magic Kingdom Park for the 2018 Mickey’s Not-So-Scary Halloween Party. One of the best reasons to buy a Mickey’s Not So Scary Halloween Party ticket is for the rare character meet and greets like Moana. I waited an hour for this picture at the Enchanted Tiki Room, and it was totally worth it.

You can currently meet Moana at 2018 Mickey’s Very Merry Christmas Party in the Enchanted Tiki Room. She comes out early, so if you don’t mind waiting in line for a long time, I suggest going there before the party starts, so you’re not wasting party time.

However, I found that as the party went on, the line got shorter. It just depends what your priorities are.

I still keep holding out hope they’ll find Moana a meet and greet spot in Disney World, because you can find Moana at Disneyland. I’m crossing my fingers for Adventureland.

For more Moana love, check out the bonus features on the making of Moana or get your free, printable Moana coloring sheets here.

Edited 4/19/2017 – Moana is no longer at Disney’s Hollywood Studios. Moana currently does not meet anywhere at Walt Disney World Resort. According to Kenny the Pirate, she may eventually move to Adventureland in Magic Kingdom, but nothing has been confirmed, and it’s all rumors.

I’m pretty bummed about the news as my daughters were very excited to meet her next week, but that’s the way it goes sometimes. I’m crossing my fingers they bring Moana back in the future, but for now she is not at Walt Disney World for a meet and greet.

After Moana left One Man’s Dream, they eventually added a meet and greet with Star-Lord and Baby Groot from Guardians of the Galaxy. However, that, too is now gone.

Hopefully they add another meet and greet soon in Hollywood Studios, because the Toy Story Land characters are all outside and it can get hot!!

Ever since the new Moana sing-along was announced, I’ve got Moana on the brain. When my friends and I passed by the Moana Meet and Greet at One Man’s Dream in Disney’s Hollywood Studios, I knew we had to stop in! Here’s the scoop on where and when you can meet Moana!

Where to Find Moana at Disney World

Yes, you heard me correctly, enter One Man’s Dream at Disney’s Hollywood Studios between Voyage of the Little Mermaid and Pixar Place. Walk all the way around to the end of the hallway and you’ll see this!

A friendly Cast Member will direct you inside the waiting room. Follow the lines on the carpet as the line wraps around.

You’ll see an estimated wait time outside the door as well as on a sign outside of One Man’s Dream. I think we only waited 20 minutes. Hours are from 9 am- 8 pm, but are subject to change anytime. Don’t forget to check your Times Guide!

The area itself is small, but it’s cute. A fun little waterfall for your viewing pleasure. Why yes, I did start singing .

My friends were nice enough to let me take a quick picture with Moana by myself, because I love her so much!

Sadly my PhotoPass picture never showed up, but I do have this awesome group shot from Disney’s PhotoPass.

Moana was the sweetest, and I’m glad we got to meet her! You don’t need kids to have fun with Disney characters. So on your next trip to Walt Disney World, head on over to Disney’s Hollywood Studios for a Moana Meet and Greet in One Man’s Dream!

Air-conditioned meet and greets are the best! And during a very cold Walt Disney World Marathon Weekend, I was thankful for the heat inside. Follow Moana, she knows the way.

Next →
How Did THAT Princess Scene Make It in Ralph Breaks the Internet? | A Pamela Ribon Interview
Click here to cancel reply.

I also love Moana! The good news is that the renovation that is taking place at Epcot includes an exclusive area for the film. I look forward to seeing you ready.

[…] As a Moms Panelist you’re answering questions for guests who want to know things like, “Where can I meet Moana at Disney Parks?” or “What Disney Parks Resort is best for my […]

[…] of Terror does not unleash mom’s wrath. If the younger kids want to meet Moana or Sofia the First, then let the grandparents take them while mom or dad take others to ride a […]

[…] currently a meet and greet with Moana can only be found at Walt Disney World during Mickey’s Very Merry Christmas Party. Some other […]

[…] are also rare photo ops with Jack Skellington, the Seven Dwarfs, and Moana. Right now you can only meet Moana at Walt Disney World during Mickey’s Not So Scary […]