Wondering if Enola Holmes on Netflix is ok for kids? Rated PG-13 for violence and politics, Enola Holmes does kick some serious butt, but it’s overall kid friendly for tweens and teens. Enola Holmes (Millie Bobby Brown) is a feminist, spunky sister to Sherlock (Henry Cavill) and Mycroft (Sam Claflin), and the game is afoot, especially if you love a good mystery. Here’s what parents need to know in this Enola Holmes Parents Guide before letting your kids watch. 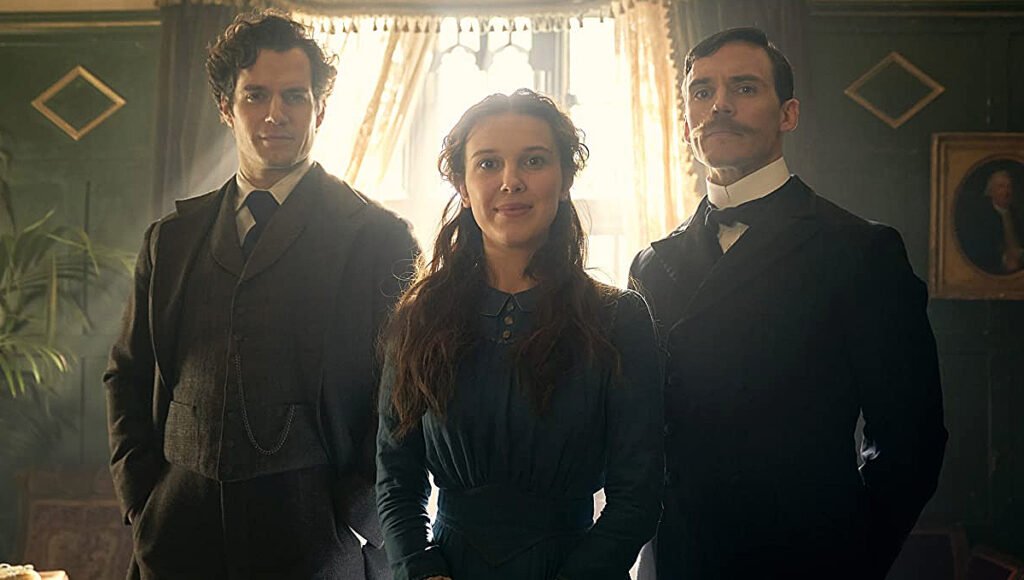 Enola Holmes is a free-spirited 16-year-old who has been living with her mother away from the rules of her society. When her mother is missing (or did she leave) Enola uses her sleuthing skills to solve the breadcrumb trail of clues it appears her mother left her.

She hasn’t seen her brothers in years, but Mycroft wants her to become a lady and tries to ship her off to finishing school. Meanwhile Sherlock is too busy to involve himself with Enola.

As Enola escapes to London to find her mother, she encounters Viscount Lord Tewksbury, Marquess of Basilwether (Louis Partridge) and he almost gets her killed. She can’t allow herself to get distracted.

Is Enola Holmes kid friendly? Overall, Enola Holmes is generally ok for kids ages 12 and up, with some violence, and yes, they get into politics. 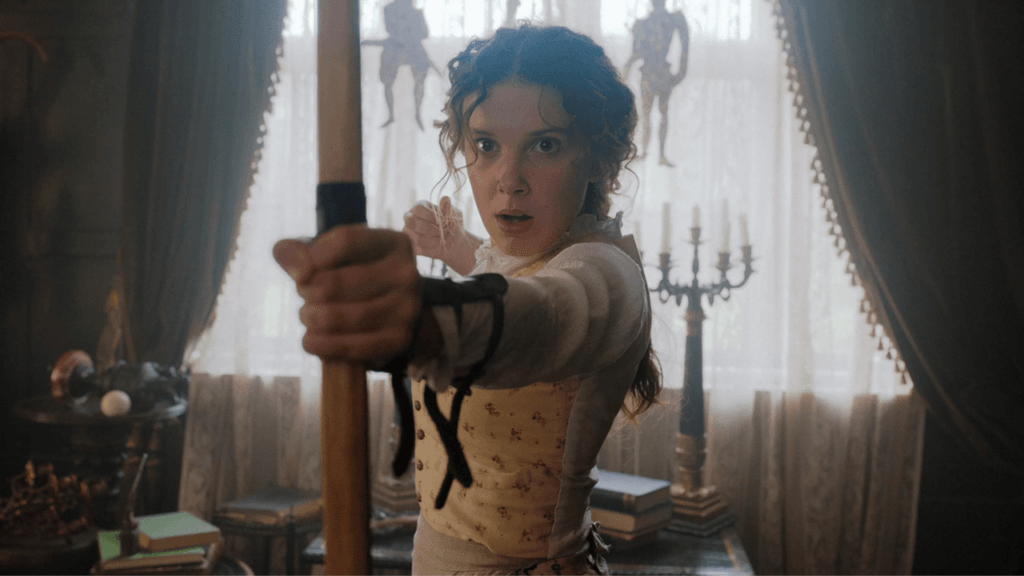 There is a little language in Enola Holmes including two uses of hell, one damn, and a few uses of “oh my g-d.”

There is mild sexual content with flirting and a kiss on the hand. There is some violence that gives Enola Holmes that PG-13 rating including gunshots, use of weapons like guns and knives, physical fighting with fists, and also characters in peril resulting in death.

In one scene a character tries to strangle and drown another. Another character’s death is a little graphic from blunt force trauma, so if your children are sensitive to violence, make sure to screen this one first.

Also, some of the characters are disparaging towards women. A character talks about Enola’s body implying her chest and hips are too small to find a husband. An adult slaps Enola across the face.

Mostly, the overall tone is feminist and girl power with Enola being a great example of an independent, intelligent girl, often outwitting her adult counterparts.

Enola Holmes is a fun, spirited adventure with Enola as a great role model for teens, although she can get a bit sassy. Kids who are fans of Stranger Things will most likely want to watch.

There is some controversy on Sherlock Holmes’s character and his empathy towards women, but I enjoyed seeing a softer side of Sherlock, even if it’s not canon.

Millie Bobby Brown is likable and does an excellent job bringing charisma to her character as she dons different disguises and characters. The case itself is not a very complicated solve but still enough to keep teens entertained.

Enola often looks straight into the camera to tell her story, almost like a reality show confessional, adding a modern touch to Baker Street. The small details are what makes this film so enjoyable.

The further into the mystery Enola goes, she learns that her mother has been part of an underground organization fighting for women’s rights. While some lessons may be hammered in too much, quotes like, “You have no interest in changing a world that suits you so well,” spat at Sherlock is a reminder that there is still work to be done.

While Enola definitely looks up to her mother, she finds her own way and even shows empathy and concern for others ahead of her own safety, despite her mother’s warnings. Enola’s admirable traits, genuine goodness, and innocent retorts are what makes this heroine refreshing from other teen shows and films.

If you want pure Sherlock Holmes, this film isn’t it, but it’s a lot of fun, and I’m definitely Team Enola.

← Previous
Is H is for Happiness Kid Friendly?

[…] Enola has some great feminist quotes as does Eudoria. But Edith perhaps the best one. Did I miss any of your favorite quotes from Enola Holmes on Netflix? Drop them in the comments below and check out my Enola Holmes Parents Guide. […]