Incredibles 2 was a big success in the theaters! Now you can own the Incredibles 2 Blu-ray and DVD in your own home. Also, one of my all-time favorite characters is the fashionista, Edna Mode. I have an easy DIY Edna Mode costume just for you! You can make it in less than 30 minutes, darlings.

If you’re going to be Edna Mode, then the first thing you need is a wig, unless you have a natural, amazing bob. Next, for your DIY Edna Mode costume are her signature round glasses. Click was kind enough to send me an Incredibles 2 Halloween package complete with this Edna wig set.

Next, is a black dress. Any short length black dress will do. I had a shift dress I used as a swim cover up. To make a red v-neck, I used red Duck Tape. You can use ribbon, too.

If you want to add some extra oomph, then Edna Mode has amazing textured sleeves. To make them, I bought a couple pieces of black felt from the craft store. I then cut them into squares and cut those squares into triangles. I then hot glued them onto the sleeves and layered them on top of each other. Sometimes I layered three triangles across and in the row below, two triangles.

You can use whatever pattern you think looks best or is easiest. I added black tights, and voila, an easy DIY Edna Mode costume! Yell “No capes!” on occasion for authenticity. 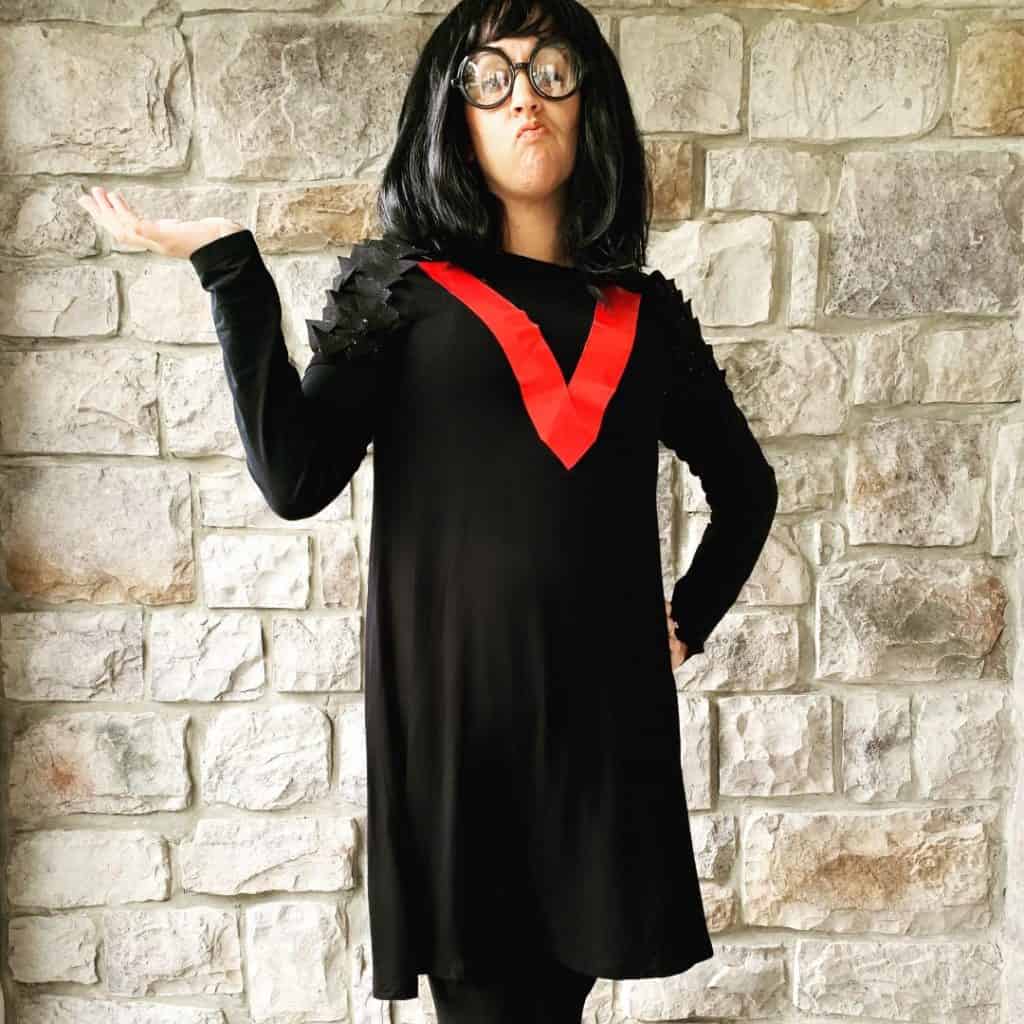 To catch more Edna Mode, pick up your own copy of Incredibles 2 on Blu-ray and DVD! The Incredibles are a family favorite, so my daughter loves to dress like Violet!

My girls also decorated some pumpkins Incredibles 2 style. I let them go crazy with Sharpies and stickers!

Here’s all the extras you can expect on the Incredibles 2 Blu-ray Bonus Features! Also don’t forget about Bao, the Pixar Short that premiered before Incredibles 2.

Incredibles 2 is on Blu-ray and DVD November 6th and on digital now! There were some things in Incredibles 2 that concerned me for kids, so usually I recommend it on a smaller screen if your children are sensitive to scary and tense situations. Check out my ‘Is Incredibles 2 kid friendly‘ review!

Next →
Come Along for the Ride at Ralph Breaks The Internet Event in L.A.
Click here to cancel reply.